GE’s aeroderivatives take off in Europe

The use of new materials, among other improvements, has allowed GE to uprate significantly its LM6000 aeroderivative. Meanwhile the first European contract for an LMS100 has been finalised. 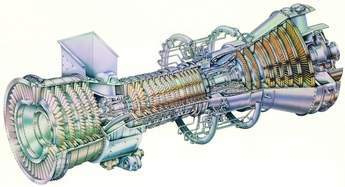 The latest upgrade of GE’s LM6000 machine, launched recently in Europe, is claimed to offer a 25% simple cycle power increase and an 18% boost in exhaust energy when employed in cogeneration applications. It comes in two variants – the LM6000 PG with single annular combustor (SAC) and its dry low emissions (DLE) equivalent, the LM6000 PH – and builds on what GE calls a product heritage amounting to over 735 installed units and 16 million operating hours with over 99% reliability.

Both variations provide combined cycle power in the 65 MW class with efficiencies ranging from 52% to more than 55%, depending on the selected emissions control methods. The power increase comes from the same 4.5m x 21.5m package footprint as the existing 50 Hz LM6000 technology, yielding a power density improvement of nearly 20%. Note however that 50Hz LM6000 units include a gearbox between turbine and generator.

The improved combined cycle efficiency of the new models is said to be able to reduce fuel consumption by the equivalent of 33000 barrels of oil per year, when compared to other similar aeroderivative solutions in its class, and reduce carbon dioxide emissions by 6500 tonnes over the course of a typical operating year.

Key to the improvements on the LM6000 are material and technology upgrades previously demonstrated on the CF6-80E and GE90 aircraft engines and the LMS100. New materials allow the combustion temperature to be raised by 50°C. Shaft speed has been increased from 3600 to 3930, which introduces the need for gearing but allows an output increase at a level already shown by GE to be well within engineering feasibility limits for this machine, and has been proven on the LM5000. Test runs to date have been on GE’s annular test rig. But the higher combustion temperature increases the need for NOx control, hence the PH model with its DLE system. Full testing is scheduled to take place in early 2009.

Both upgraded models have been designed with specific attention to commonalities between the 50 and 60 Hz offerings, allowing operators to benefit from a global experience base. Said to be supporting strong global demand, the PG variant will be available in the first half of 2010 with the PH following a year later. The 60 Hz packages will be assembled in GE’s Houston, Texas facility, the 50 Hz packages manufactured in its facility in Hungary.

GE recently signed contracts for five LM6000 units in Europe, part of a clutch of new contracts involving another of its aeroderivatives, the high efficiency LMS100, making its debut in Europe. It was introduced to the market in December 2003, the first unit being shipped in October 2005, and is a simple-cycle, three-shaft gas turbine that uses intercooling technology to increase power and efficiency. At more than

100 MW and 46% efficiency, the LMS100 is said to provide the highest level of performance of any aeroderivative gas turbine today.

Two of these machines are going as turbine generator packages to the Edison Group SpA for installation at their Marghera Azotati combined cycle power station located near Venice. This is just part of a drive on the part of Italy’s generation companies to make up the deficiency in the country’s capacity which sees it having to import in excess of 10% of its consumed electric power in order to meet current levels of demand. High power prices and new environmental policies have spurred an increase in the development of new, more efficient gas turbine power generation projects in the region, which has also seen GE sell five of its LM6000 turbogenerator packages, namely two LM6000 PD SPRINTs (with one LM2500+G4) for the Burgo Group SpA, to be installed at a combined cycle paper mill located in Duino, an LM6000 PD SPRINT package for Sadelmi SpA to be operated by Cartiere del Garda at a combined cycle paper mill facility located in Riva del Garda, and two 15PPM SPRINT packages for Dufenergy Italia SpA to power a new combined cycle plant located inside Silvachimica’s chemical factory near Mondovi.

The Burgo Group is Italy’s largest paper mill company and the biggest industrial independent power producer other than oil and gas related companies. The Edison Group selected the 100 MW LMS100 as part of an effort to increase the profitability of its Marghera Azotati combined cycle power station which is currently powered by two heavy duty turbines. The first unit will enter commercial operation in April 2009, the second in February 2010.

Cartiere del Garda purchased its LM6000 PD SPRINT as part of a repower effort replacing four smaller, lower efficiency gas turbines and two steam turbines. The new plant will take over the steam and power needs of the paper mill. The unit is accompanied by a 12-year contractual service agreement and is expected to enter commercial operation this summer.