In recent weeks GE has reported a number of milestones for its all-air-cooled H class turbine, the HA, introduced less than 36 months ago, with 59 orders to date worldwide. Recent developments include orders in China and Pennsylvania, signing of a multi-plant $1 billion agreement with Caithness Energy and first firing in Pakistan. 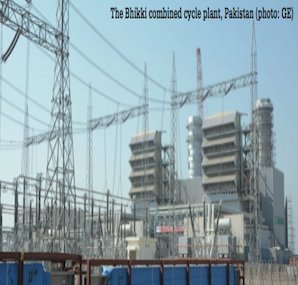 In recent weeks GE has reported a number of milestones for its all-air-cooled H class turbine, the HA, introduced less than 36 months ago, with 59 orders to date worldwide. Recent developments include orders in China and Pennsylvania, signing of a multi-plant $1 billion agreement with Caithness Energy and first firing in Pakistan.

The Chinese contract award has been placed by GE’s long-time partner in China, Harbin Electric Corporation. The contract is for supply of a 9HA, 50 Hz, machine for the 650 MW Huadian Tianjin Junliangcheng VI gas combined-cycle facility – a coal plant conversion project. Delivery of the gas turbine to Junliangcheng is scheduled for the third quarter of 2018.

GE points out that over the last ten years, the Chinese gas-fuelled electricity industry has seen rapid growth, about 334% (albeit from a relatively low base). China’s 13th five year plan for electricity development estimates that from 2015 to 2020 the installed capacity of gas fuelled electricity generation will increase over 10%, reaching 110 GW.

Junliangcheng is expected to achieve a combined cycle efficiency of over 62%.

The facility in adition supplies district heating to the city centre and the outer regions of Tianjin.

Harbin is also partnering with GE on the 1180 MW Bhikki combined cycle plant in Pakistan, where first firing of one of the two 9HA.01 gas turbines took place on 13 February 2017, just 17 months after the turnkey project was first announced, says GE. With Pakistan facing an estimated 5 GW power shortfall, Pakistan is aiming to move forward quickly with such projects, which will play a critical role in meeting the government’s goals under Vision 2025 to expand access to electricity to over 90% of the population.

GE entered an agreement to provide two 9HA.01 gas turbines and associated equipment to Harbin Electric International (HEI) for Bhikki in September 2015. HEI is providing engineering, procurement and construction services for the facility.

Back in the USA

On 8 March, GE and Caithness Energy announced “an exclusive agreement with the intent to pursue development of multiple new HA combined-cycle power plants in the USA.” The equipment package that GE will deliver as part of the agreement has a total value that could exceed $1 billion, the company says. The package is configured to include up to six HA gas turbines, six steam turbines, six heat recovery steam generators and other equipment. The agreement was expected to be effective 31 March 2017, and the plants are projected to be developed throughout 2017 and 2018.

“We’re thrilled to continue our longstanding relationship with GE and expand our fleet of HA power plants across the United States,” said Les Gelber, president, Caithness Energy. “We’re currently working to bring a new HA plant on line in Pennsylvania in 2018, and with this exclusive agreement Caithness will become the owner of the largest fleet of HA gas turbines…anywhere in the world.”

The HA gas turbines included in the agreement will be manufactured at GE’s Greenville, SC, facility, and the steam turbines will be built at GE’s Schenectady, NY, facility. In addition to the equipment, GE expects to provide multi-year service agreements for the continued maintenance and operation of each plant. GE expects to record the orders for the equipment and services over the next 24 months.

It already has two HA machines in a new combinedcycleplantitisconstructingjointly with Moxie Energy in Salem Township, Luzerne County, Pennsylvania. This facility, the 1029 MW Caithness Moxie Freedom generation plant, will tap natural gas from the Marcellus Formation.

GE says that the HA technology that will be delivered to Caithness “will enable greater than 63% net plant efficiency on a standard condition basis” and also offers “industry- leading” flexibility, “capable of delivering full power to the grid in under 30 minutes.”

In addition to the equipment order, GE, through GE Capital’s Energy Financial Services, co-lead arranged senior secured credit facilities with CIT Bank and Investec, which will be used to support construction and operations of the plant.

The Birdsboro Power project was developed by EmberClear Corporation, and the order includes, as well as the 7HA.02 gas turbine, one D650 steam turbine, one heat recovery steam generator, plant controls and additional equipment. As for the Caithness projects, the gas turbine will be manufactured in Greenville and the steam turbine in Schenectady.