From the last come a first

When the Wylfa 1 reactor was shutdown for the last time on the afternoon of 30th December 2015, it brought an end to the 49-year history of the UK’s Magnox stations. But a nuclear first was achieved that day as well, because the reactor had almost used up all of the fuel available, as NEI reports. 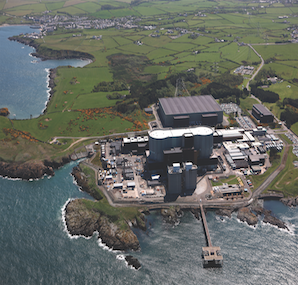 Duncan Hall, nuclear science and structural integrity operations manager at Amec Foster Wheeler’s Clean Energy business, said: “What Magnox did, with our support, at Wylfa has not been done anywhere else in the world as far as we’re aware. Usually, reactors tend to be shutdown with lots of very productive fuel still inside. That would probably include some fuel that was placed inside the reactor only a few months before. This is a waste because fuel doesn’t get to its most reactive state until it’s been in use for about a year.”

Wylfa’s precise timing did not happen by accident. Back in 2002, Magnox commenced initial studies into fuel cycle optimisation at its four remaining stations, which also included Sizewell A, Dungeness and Oldbury.

In 2003, a new programme of end-of-life fuel cycle optimisation was launched with revised objectives. It was able to build on earlier experiences, but with a new vigour and a clear business emphasis.

The main steps undertaken were to:

Four central functions-led project teams were established to work in parallel, interact and deliver this programme. They operated under a programme manager, team leaders and nominated site contacts. The programme manager was supported by a senior consultant and two technical integrators to ensure consistency and technical efficiency across the projects. The internal personnel resources were supplemented with staff from the supply chain. The programme had up to 30 staff involved and delivering work at any one time.

For each of the four sites, a meeting of all stakeholders was held and a process of strategic optioneering was undertaken to determine the best fuel cycle strategy to final shutdown.

To optioneer successfully, it was essential to provide a quantification of these options, as well as assessing their other merits. For this option-evaluation programme it was possible to take advantage of a number of existing in-house capabilities. For example, reactor models in a code called PANTHER had already been created for studies of plant faults and these models had been adapted to use in fuel cycle studies for some stations.

Unlike most codes, all model data in PANTHER are available to be modified by the user during a run. The code is modular and a long sequence of evaluations can be assembled from primary functions. The site- specific models had extensive nuclear data libraries and data tabulations and the models were endorsed for reactivity assessments and fault modelling.

Two main approaches were used: synthesised end-states and the more detailed time-marching method. For the optioneering input stage, the effects of operating each policy for different periods of time were synthesised by adjusting the fuel element irradiations or altering the reactor fuel loading (replacing fuel channels with a representation of vacant channels). This was quick to achieve in PANTHER and a before and after evaluation could be completed in the same run. For the subsequent studies in support of the safety cases for the chosen option, the more conventional time-marching method was adopted.

In the optioneering meeting, these mostly quantified options were tested against the economic and safety criteria and also the acceptability of fuel for reprocessing.

The chosen options were:

Once the initial projects had confirmed their choices a final fuel order consistent with their envisaged fuel cycle was placed. A start was promptly made on work to create safety cases to alter the steady-state fuel cycle to a terminal one at each site. For each station a series of time-marching fuel cycle calculations was performed using the PANTHER code.
The reactor protection requirements were necessarily assessed against the reactor fault schedule. The most significant issues related to the reactor temperature automatic trip settings designed to protect the reactor against symmetric and asymmetric reactivity faults.

The decision was made in 2012 to extend the periods of generation at both Wylfa and Oldbury, based on an extension to reprocessing at Sellafield that gave it a later end-date. The planned closure dates were extended by up to five years.

Oldbury had been shutdown for a detailed inspection of the graphite core condition. So, upon the satisfactory completion of the inspection, it was able to return to the original planned fuel cycle while investigating further options. The chosen option was inter-reactor transfer of fuel after fuel stocks became exhausted. Reactor 2 was duly shutdown and fuel transferred to Reactor 1 using the refuelling machine, which traversed the common pile cap. Reactor 1 continued generating until June 2012.

For Wylfa, a generation optimisation project was established to build on the lower element retention schemes then implemented. With a finite fuel stock it was possible to predict that fuel exhaustion would occur in the spring of 2012, some two years short of the new target “window of opportunity”. The optimum strategy was to move low burn-up fuel from one core to the other to replace fuel nearing its discharge irradiation level. To achieve this mode of running at Wylfa, the donor reactor had to be shutdown first and preparations made to have replacement fuel available for the running reactor when fuel stocks were exhausted. A six month period was planned that allowed the fuel stock to be optimised and allocated by small adjustments to fuel-type usages, putting the two cores on different fuel cycles for the first time. Reactor 2 was selected as the donor and finally shutdown in April 2012.

This first plan forecast that there was sufficient fuel to operate effectively until autumn 2014. When Wylfa’s end-of- generation target was extended to December 2015, other options for optimisation of fuel usage had to be identified. In 2012, new and discarded options were considered at a further optioneering workshop. Plans were put in place to further extend the period of high power operation by reducing the use of steel nose cone fuel and then ‘harvesting’ just the top elements of channels in the higher range of burn-ups. These top elements were then loaded in sixes on top of retained FE1 and FE2. These innovations, in combination, were designed to allow high power generation until December 2015.

The business opportunity required four parallel work-streams of reactor physicists, modellers, fault analysts and safety case authors, plus site implementation teams, all operating to tight timescales. This project work package had not been envisaged in earlier Magnox plans. With central function staffing and the specialist supply chain mobilised, this ambitious programme was delivered and its success led to significant savings at the two stations that closed first, Sizewell and Dungeness. It is entirely as a result of this fuel cycle optimisation that all four reactors at those sites finally shutdown at basically full power and on their target dates.

The programme set both Oldbury and Wylfa on more fuel efficient fuel cycles with associated safety cases. When business circumstances changed, and opportunities were created to generate for longer at Oldbury and Wylfa, capabilities and prior studies could be readily brought forward and implemented.

The UK’s Nuclear Decommissioning Authority has recognised that extending Magnox generation created more than £1 billion of income, which has offset some of the costs of accelerated site decommissioning. In addition, the terminal fuel cycles were more fuel efficient at all four sites and so less fuel had to be reprocessed per TWh of electricity generation. The programme has also contributed to saving UK carbon dioxide emissions through nuclear generation, as opposed to fossil fuel alternatives.

The keys to success were:

In the area of fuel cycle optimisation, key aspects were:

Amec Foster Wheeler’s reactor and fuel performance, reactor physics and fuel cycle management teams worked closely with Magnox throughout the programme. Hall explained: “Most people think this is something just for physicists and fuel cycle people to deal with. In fact the key to success was to involve fuel reprocessing and fuel transport, as the interfaces with them were crucial.

“Magnox was able to dispense with the equivalent of four years’ fuel purchases. With each reactor having space for more than 48,000 fuel elements, this adds up to a very considerable amount of money. And because the used fuel was more irradiated because it had been in the reactor for longer, it did not cost as much to reprocess.”

News of the results achieved at Wylfa has spread around the industry in the UK and abroad, so Hall and his team are now talking to other operators about how they can achieve the same efficiencies.