From taboo to necessity

The disposal of radioactive waste has long been an issue for the industry. With concerns over environmental issues ever-present and growing fears of security it has even hit the mainstream news in recent months. As Charles McCombie and Neil Chapman of Arius Association and Ewoud Verhoef of COVRA discuss a multinational approach is not only a reasonable aim but is looking more likely than ever before. 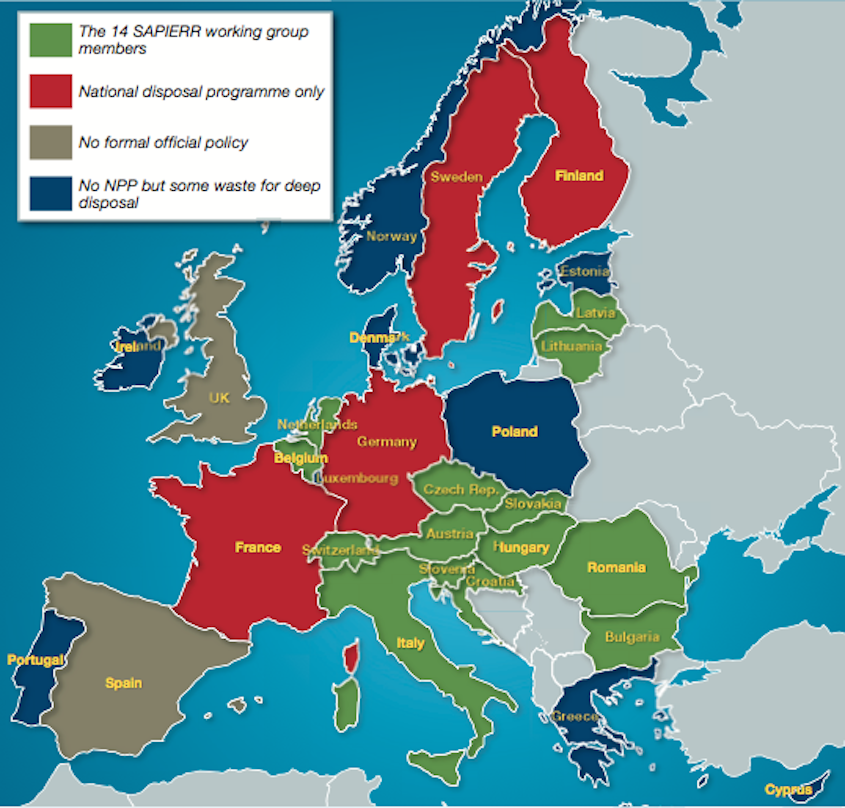 In the early decades of nuclear power, multinational fuel cycle facilities were topical and studies were performed on regional and international spent fuel management. Up to the 1970s, the complete back-end of the nuclear fuel cycle was internationalised: the UK, France and Russia all retained waste produced by reprocessing fuel from other countries. Growing opposition, particularly within the UK and France, led to commercial reprocessors being compelled by their governments to require that radioactive waste be returned to client countries which were then faced with the challenging task of disposing of HLW and reprocessing ILW.

From the 1980s onwards the greatest challenges, technically, economically and societal, lay in implementing geological disposal facilities (GDFs). GDFs are expensive, costing tens of billions of euros, especially for countries with small nuclear power programmes to generate the funds. Non- nuclear-power countries also accumulate radioactive waste from medicine, industry or research that must also be disposed of in GDFs. Most technologically advanced industrialised countries now require access to a GDF for wastes in storage, even though quantities may be only a few tens of cubic metres.

There are large potential economies of scale if countries share a disposal facility. Although the advantages of shared repositories were recognised, the concept was strongly criticised by some national waste management programmes. They claimed the programmes might alarm the public and politicians who may fear the import of ‘foreign’ radioactive wastes, even when this was not permitted by national laws. In Europe the concept of regional repositories became highly controversial. Some advanced programmes said publicly that all discussion of this ‘sensitive topic’ should be stopped. It was argued that the prospect of shared solutions might have negative impacts on national endeavours. Most worries were related to the risk of local rejection of a national GDF.

Proponents of multinational initiatives felt these concerns were over-inflated and were surprised at efforts to hinder progress with shared GDF plans. Some concerns were understandable, such as local opposition or reduced political or financial support for a
national solution. But proponents considered the fear of a country being compelled against its will to accept waste from other countries was unwarranted. The concern that effort or attention might be diverted from a national programme was realistic, but the modest resource requirements of multinational initiatives in their early phases meant that a national programme could examine both options in parallel, as is now happening in several national programmes.

In the last five years there has been recognition that countries could gain economic, strategic and security benefits from shared solutions for long-lived wastes. This view spread more easily as some GDF sites were developed and as security concerns grew over nuclear materials in countries that could not implement national disposal facilities in any foreseeable future.

Every country with long-lived radioactive waste will be best served by having a credible policy and management programme, and a timetable for implementing it. This will require a mix of national and shared multinational projects. It is important that the most advanced purely national programmes are not hindered. Only when all countries have an independent programme, or are part of a transparent and credible shared programme, will fears about imposing wastes on unwilling countries cease to be of concern?

Active developments at the IAEA

In 2004, the IAEA summarised early work on multinational concepts going back to the 1970s. In 2005, at the request of the Director General, a high-level expert group produced a report on multilateral approaches to the nuclear fuel cycle, covering enrichment, reprocessing and disposal. Further reports addressed the viability of multinational repositories (2011) and a staged approach for partnering to build such facilities (2015). The latter examines the benefits and all risks of a technical, financial, institutional or socio-political nature. The fact that the report took around three years to be cleared at higher levels in the IAEA indicates the topic is still sensitive.

Currently, the International Project on Innovative Nuclear Reactors and Fuel Cycles (INPRO) section at the IAEA is starting a project to study drivers and impediments to multinational back-end cooperation and starting from suggestions at the 2015 IAEA General Conference, a Topical Meeting is being prepared on ‘Disposal of Spent Fuel or Radioactive Waste in Another Country’.

A major step forward in evaluating all aspects of shared GDFs was taken between 2005-9 through the 14-country SAPIERR project, financed by the European Commission. The project reported on legal and business options, responsibilities, financial liabilities, economics including hosting benefits, security and public and political attitudes.

SAPIERR showed that apart from the credibility of a concrete and common plan the most obvious advantages are the economic benefits to countries and to the EU as a whole. Partner countries could save billions of euros by sharing development and disposal costs, with over half the savings being in shared RD&D. A common concept, design and eventually site, has tremendous economic and political benefits. For the models analysed, the saving to the EU as a whole was estimated at €15-25 billion. If a regional facility could offer a commercial disposal service to other European countries, the original partner countries may be able to manage their own current and future wastes with further cost reductions. There would also be economic benefits to the host country and community.

SAPIERR found that most of the challenges in developing a shared regional GDF are analogous to those of a national facility. Finding suitable sites remains the biggest challenge and SAPIERR helped formulate a possible siting strategy.

SAPIERR concluded by making proposals for a staged, adaptive implementation strategy leading to a shared European GDF. The European Repository Development Organisation Working Group (ERDO-WG) was formed and governments from eight Member States have provided funding and representatives since 2009. The group has considered organisational forms and financing models for a European Repository Organisation (ERO) that would initially function as a small sister to existing national organisations. Discussion documents cover siting strategies, the size and form of an ERO, outreach activities, operating guidelines and a model constitution. An important part of ERDO-WG activities has been analysing the impact on small radioactive waste programmes of European Council Directive 2011/70/ EURATOM. A key aspect of this is the need to pursue a ‘dual track’ approach.

Outside Europe, international entities are studying the potential impacts of multinational storage or disposal, in particular of spent fuel. The Arius Association – which provides the secretariat for the ERDO-WG – has worked on this topic since 2002. Arius has received financial support from the US Sloan and Hewlett Foundations to examine how the European model might be extended to countries in
the Middle East and North Africa or Asia. Workshops focussing on common or regional waste management issues have been run in Tunisia with participation of MENA nations and in the UAE, with participation of Gulf Co-ordination Council countries. Some meetings have been held in cooperation with the IAEA and the Arab Atomic Energy Agency.

The Nuclear Threat Initiative (NTI) runs the ‘Developing Spent Fuel Strategies’ project, supported by the MacArthur and Hewlett Foundations, which also looks at how multinational facilities might affect the nuclear fuel cycle. The American Academy of Arts and Sciences (AAAS) also examines this question in its ‘Global Nuclear Futures’ project. Arius has contributed to NTI and AAAS meetings in Vietnam, Indonesia and Taiwan and is involved in an International Framework For Nuclear Energy Cooperation (IFNEC) project to elicit information and national views on the ‘dual track’ approach.

A new initiative of the government of South Australia is creating much interest. A Royal Commission has been set up to assess the impacts in South Australia of expanding the state’s nuclear activities beyond the extraction of uranium. Potential new opportunities include establishing a nuclear power programme, manufacturing and leasing nuclear fuel and providing spent fuel, HLW and ILW storage and disposal services. The Royal Commission has awarded contracts for various studies, including business cases for such services.

This is groundbreaking. Unlike the European partnering projects discussed above, this is a commercial multinational disposal project – something that has not been countenanced for over a decade. When the Royal Commission reports in May, the reaction of political and business groups and the Australian public will be a critical barometer for multinational initiatives. If a state-sponsored multinational
initiative in a country with the global political status and credentials of Australia were to be available, it would change worldwide radioactive waste management.

As in any national programme, identifying a GDF site is the ultimate requirement of multinational solutions. The approach advocated by Arius and ERDO-WG aims to find a site that is demonstrably environmentally safe and secure and would be applicable for any regional initiative worldwide.

In the approach a fundamental premise is that the siting process must be voluntary or consent-based:

Further Stages, up to Stage 20 (site evaluations, safety case production, licence submissions etc), are more typical of those employed
in national programmes. This begins at community level and does not require national government decisions until it has local support.

Potential host countries will emerge only after extensive interactions with interested communities. Although the study suggested a feasible timescale of 15 to 20 years to reach a preferred site and a ‘point of commitment’, national experiences show considerable uncertainty in time estimates. However, national GDF programmes may be operational within the next five to eight years. With the fillip that could be provided by an Australian initiative, it is possible that the long history of GDF delays may be coming to an end.

We acknowledge the encouragement and input of all those organisations and individuals who have supported Arius, ensured that the ERDO-WG came into being and helped spread the concept to other regions of the world.

References for this article are available on request.