From old to new – refurbishing a US dam 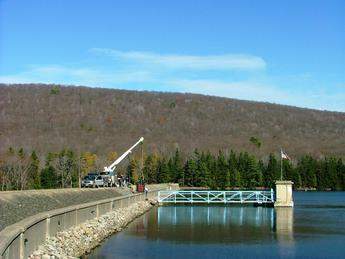 The Bear Gap dam No. 6 in Central Pennsylvania, US was originally constructed in 1895 and subsequently raised and rehabilitated in 1985. It is an earthen embankment dam 457m in length with a primary ogee weir spillway on the right abutment and an emergency ogee weir spillway on the left abutment. The reservoir holds 6M litres of water with a total dynamic head of 21.3m. The high-hazard reservoir impounds the South Branch of Roaring creek and supplies drinking water to Schuylkill, Columbia, and Northumberland counties.

Dam owner Aqua Pennsylvania had experienced continuing problems with a 76.2cm gear driven, non-rising stem, double disc gate valve located at the bottom of the outlet structure, and serving as the low level drain for the reservoir. The valve, which was installed when the dam was built, had been encased in concrete at some point, probably to stop a leak from the old cast iron, lead joint pipe. Several earlier attempts were made by previous dam owners to rebuild the valve, but it had limited success.

Patrick Burke, PE, with Aqua Pennsylvania, and the engineer on the project, became concerned when a company employed to investigate the replacement of the valve recommended a plan of deploying an inflated plug into the conduit, removing the old valve by jack-hammering the concrete from around it, and then installing a replacement gate valve. This plan not only caused structural concerns, but it also represented a great danger to the contractor’s employees because of the obvious possibility that the plug would fail, flooding the dry structure with the work in progress. The engineer contacted Watershed Services, a specialty dam repair contractor, to review the process and recommend a safe alternative to provide a valve replacement for the reservoir drain.

There were certain design considerations to take into account; primarily, Burke expressed that draining the reservoir was not an option. Aqua Pennsylvania needed a solution that would allow metered flow, and work with their existing Supervisory Control and Date Acquisition (SCADA) system. It would have to be put in place without causing contamination concerns for the reservoir or
requiring the pool to be lowered, and the old valve would have to be removed so flow in the pipe was not restricted.

Watershed Services recommended a standard Waterman Model 5500, mounted externally on the concrete structure, and fitted with a hydraulic actuator and controller from Cahill & Associates of Troy, Ohio, US. The new valve would be capable of autonomous operation, and would interface with the existing SCADA system.

Cahill & Associates’ 12-volt hydraulic actuator and controller was deemed suitable for the project; it is programmable for autonomous operation triggered by many events such as rate of rise, water level, rainfall, inflow, outflow, or time interval.

It is capable of cascading logic sequences, initiating warnings from a simple siren before valve operation to notifications in an Emergency Action Plan, and can communicate via telephone, satellite, radio, or internet. The unit is solar powered by a bank of gel cell batteries that are independent of utility power. This
independence allows the hydraulic valve to be operated practically anywhere, even in extreme weather events when the utility power is most likely to fail.

In this installation, the actuator system was to operate the valve at reasonable frequencies with allowance for throttling of the flow as dictated by water level downstream, water level in the reservoir, and rate of rise. The entire sub-system could be controlled and monitored through Aqua’s existing SCADA system, and its parameters could be revised within preset parameters by connection to an internet based control system.

The concrete of the existing riser structure had deteriorated over time, and it was decided that the best repair would include a new cast concrete structure to receive the new valve. The engineer, in concert with Watershed Services, designed a concrete block that would be cast on the bottom slab of the outlet structure to support the new valve and associated components. This allowed the use of superior attachment hardware to assure that new valve would exceed its 100-year design life.

Watershed Services completed the assembly of the valve and hydraulic cylinder in its facility in the Richmond, Virginia area. The valve was constructed with an attached sacrificial form made from a 0.6cm steel plate to contain the underwater concrete pour.

The valve and form assembly was placed into the water by crane and floated to the site suspended from a lift bag. The assembly was lowered into place between the training walls at the base of the outlet structure and was secured in place with 2cm stainless steel expansion anchors that were drilled with a hydraulic underwater hammer drill. A cage of reinforcing bar was erected in place and tied into the structure walls and base slab.

Watershed Services’ commercial divers found that the plug that had been placed in the conduit by the previous contractor had, in fact failed, and the remains of the plug had become lodged within the body of the valve.

A specially amended concrete mix was placed into the form from a pump truck positioned on the dam. It was critical that the water was not allowed to become turbid from free Portland cement or from silt because the screened intake for the treatment plant was only 6m from the work site. Divers from Watershed Services poured and finished the concrete behind the valve’s sacrificial form, creating an integral element of the tower.

A hole was drilled well below the low water/ice line to receive the two stainless steel hydraulic tubes that then continued up the interior of the structure and were connected to the actuator cabinet.

Diving work was completed through the ice for the latter portions of the installation. A solar array was installed on the roof of the structure and a solar monitor was installed inside a NEMA 4X actuator enclosure to maintain the charge of the gel cell battery.

The completed system allows for future expansion including autonomous control of water level, emergency response, and reporting from the tower, as well as simple open/close and throttle operation of the low level drain.

Because of the close coordination and complementary relationship between the owner, contractor, and engineer, the project was completed for under US$200,000.

The low level drain was changed from an early nineteenth century installation to a modern installation that will serve Aqua Pennsylvania well into the next century.