A US firm has developed a new helical turbine for run-of-river projects that it says can reduce production costs and improve productivity. Jerry Fireman reports 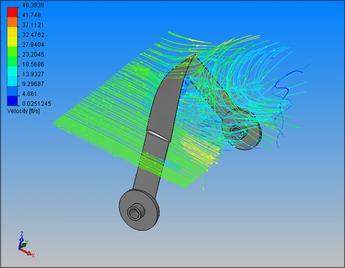 Determining the bearing and blade support loads in operation was critical to the design process. To reduce the time to market and better manage the project, GCK hired Sigma Design Company, a New Jersey-based design/engineering firm. The traditional approach would have been to hire consultants to perform the analysis using high-end CFD and FEA software, but this would have been very expensive due to the cost of licensing the software and paying for highly trained analysts to perform the calculations. Instead, Sigma Designs engineers performed the analysis at a much lower cost using CosmosFloWorks CFD software and CosmosWorks FEA software, both from SolidWorks Corporation, Concord, Massachusetts.

CosmosFloWorks and CosmosWorks are tightly integrated with SolidWorks 3D mechanical design software, which Sigma used to render GCK’s designs as 3D solid models. ‘We simply created a single SolidWorks model and added appropriate boundary conditions to determine the hydrodynamic forces and distribute them across the blades,’ says Gerald Lynch, president of Sigma. ‘Because the software is much less expensive and our engineers can use the SolidWorks model for both CFD and FEA, we achieved substantial savings and passed them on to the customer.’

GCK Technologies developed the Gorlov helical turbine specifically for hydroelectric applications in run-of-river projects. Alexander Gorlov’s design uses blades that are twisted into the shape of a helix, rotate at twice the velocity of the water current flow, and turn in the same direction regardless of the flow direction.

In flowing water, the Gorlov turbine can capture approximately 75% more of the water’s energy than a conventional turbine, and in full production the cost of an installed open-river hydro power system should be US$400 to 600 per KW. In addition, these new turbines have virtually zero operating costs. The new turbine can provide electrification to remote areas that might never be reached by the power grid. Generating capacity is proportionate to the number of modules installed, and the device has the potential to reduce dependence on central power generation, especially in developing countries.

The helical design was developed in a laboratory but even before it was completed, GCK engineers recognised that they needed to accurately determine loads on the blades and bearings in order to optimise the design from a structural standpoint to reduce manufacturing costs and ensure reliable operation. The traditional approach would have been to instrument the turbine with strain gauges and encoders but this would have been time-consuming, only determined stress at a few discrete points and not provided any information on flow that could be used to later improve the design. For this reason, most similar problems are addressed today using CFD and FEA.

First, CFD is used to simulate the flow fields around the turbine and determine the hydrodynamic loads operating on it. Then, FEA is used to simulate the application of these loads to the structure and determine the resulting stresses and deflections. High-end software programs are typically used that might cost US$30,000 per user and are so complicated. Normally, standalone programs would be used so the models for each would need to be constructed separately and the results would have to be transferred manually from CFD to FEA.

Sigma Designs specialises in a different approach which is based on the use of tightly integrated software. While this software does not provide 100% of the capabilities of the high-end packages, it can easily handle over 80% of analysis problems and can be used by design engineers without specialised training. Since the turbine was originally designed by hand, Sigma engineers began by using SolidWorks to model its geometry. They measured sections of the blades and extruded them to create the basic geometry. After verifying the geometry with their client, without even leaving SolidWorks , they accessed the geometry from CosmosFloWorks, fluid flow analysis software that is fully embedded within SolidWorks. This software provides fluid velocity and pressure values throughout the solution domain for systems with complex geometries.

Sigma engineers used the CosmosFloWorks Project Wizard to define the flow analysis on the solid model. The next step was defining the boundary conditions of the model, which were based on water flowing through the turbine at a speed of five knots. They defined a velocity at the flow inlet, which the software converted to a mass flow, as well as a pressure boundary at the downstream end of the model. Engineers simulated the turning motion of the blades by using the Inlet Swirl option and specifying an angular velocity. The last step was to instruct the software to automatically mesh the fluid volume, the empty space within the solid model. There was no need to build the fluid volume because CosmosFloWorks did this automatically.

The latest version of CosmosFloWorks offers an approach in which the blades are included in the analysis and a rotating frame of reference can be used to simulate the rotation of the blades, allowing for a single solution to fully capture the effects of the blade motion. The results of the analysis included the forces generated by the flow on the blades and the resulting torque. The analysis results were validated by comparing the torque predicted at different flow velocities to experimental measurements. The analysis predictions closely matched the experimental results.

The next step was applying these forces to the structure. Sigma engineers first went back to the solid model and calculated the moments of inertia of the structure. They then performed a hand calculation to determine inertial loads on the structure and added those forces to the hydrodynamic loads calculated by CFD to determine a total load package for the FEA analysis. They then went to CosmosWorks, and adjusted the model to re-enable the solid areas. They automatically meshed the geometry with tetrahedral elements using node-to-node contact surfaces. Material properties were assigned to each component. Then they applied the loads that they had just calculated to the appropriate nodes of the model.

The FEA analysis indicated stress levels throughout the structure. Stresses in a few areas were too high and so low in others that the mass of the structure could easily be reduced in the low stress areas. Sigma engineers recommended changes to the weldment that comprised the structure in order to reduce both weight and stress. The information determined during this process was used to specify the bearings.

‘This project made it possible to successfully optimise the structural design of the turbine at only about half the cost that would have been required using traditional high-end software,’ Lynch said. ‘The customer was impressed by the accuracy with which CosmosFloWorks duplicated physical experiments as well as its ability to provide far more information than can be obtained through experiments, such as contour charts that show flow velocity, direction, pressure, and temperature throughout the solution domain. The combination of CosmosFloWorks and CosmosWorks provided a complete analysis solution that addressed all of the critical issues raised during the design process, particularly hydrodynamics forces and structural integrity. Our use of Cosmos saved our client money because the software is less expensive, can be used by ordinary design engineers and the entire analysis process takes much less time because of the close integration with SolidWorks.’