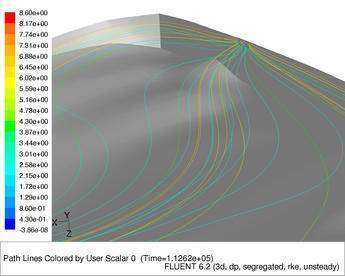 In recent years, the hydro power generation industry has been under increased pressure to address fish safety concerns. While a vibrant aquatic ecosystem and hydroelectric power are compatible, there are a number of technical challenges to be overcome. Firstly, spawning fish such as salmon need to be able to swim upstream, which requires the construction of a ‘fish ladder’ or other means for the fish to bypass the turbine runners. Additionally, the high shear and pressure gradients encountered in many turbine runners can kill or injure fish on their way downstream through the dam. Further, maintaining an appropriate level of dissolved gases downstream of a dam is of vital importance, since too little oxygen or too much nitrogen can reduce or eliminate fish populations. Many of the hydroelectric dams in the US will be involved in the Federal Energy Regulatory Commission (FERC) relicensing process over the next ten years. Minimising the impact of the dam on fish and wildlife will be a significant factor determining the outcome.

In order to minimise associated expenses, utilities should begin planning and evaluation of technology implementation as soon as possible. To minimise the costs associated with testing and implementation, virtual prototyping of possible scenarios will be invaluable to utilities working toward renewals of licenses. Computational Fluid Dynamics (CFD) is a technology that has a proven history in this field. The method involves creating a digital representation of the geometry of a body of water along with water intakes, then dividing up the water domain into small control volumes. This enables the computational solution of the equations of fluid flow, which can then be used to track dissolved gases, fish motion, and shear stresses, which affect aquatic life.

Below are several examples of how CFD has been used to evaluate fish protection solutions in the power generation industry.

In an effort to help channel juvenile fish through a safer bypass route around the Rocky Reach dam on the Columbia river in Washington state, a unique 10 x 3 pump array was constructed (Figure 1). The array was designed to draw water through a fish attraction channel and recirculate it into the headwater above the dam, encouraging fish to swim downstream while bypassing the turbines. The ultra low head, low noise, submersible propeller pumps were created specifically for this purpose by engineers at ITT Flygt of Stockholm, Sweden and Trumbull, of Connecticut, US.

CFD was used for two facets of the project. First, it was used in the design phase to optimise the geometry of pump components such as the inlet, propeller, guide vane, and exit diffuser. Designs were tested using CFD and compared to data from a 1/6 scale model in the Flygt hydraulics lab in Stockholm. This validation provided the confidence required to investigate performance of full scale models with CFD.

Second, Fluent was used in the application phase to understand better the inlet and discharge flows as well as the interaction between neighboring pumps in the array. The first CFD analyses on the discharge from a single stack of three pumps suggested that the individual pump discharges did not diffuse adequately after exiting from the pumps. Any high velocity in the pump discharge area is undesirable because it might attract and confuse the current-sensitive migrating fish. The CFD results also indicated that considerable recirculation was taking place above, below, and in between the pump discharge jets, thereby exacerbating the problem of non-uniform flow. Several discharge baffle arrangements were analysed to determine a practical means of reducing the recirculation and making the discharge from each vertical set of pumps more uniform. The most effective of these had baffles added above and below the pumps and diverging walls on either side of the column. The resulting discharge was characterised by a flatter velocity profile across the three pumps and only minimal recirculation above and below the set.

Figures 2 and 3 show some of the qualitative results that were used in the application phase of the project. This type of visualisation, which can be both difficult and expensive in the field or laboratory, is critical to the physical understanding of the flow and informs designs that provide the required flow features, ensuring the resulting performance.

During hot summer months, lakes upstream of hydro turbine power plants can experience stratification of dissolved oxygen. The surface water is well oxygenated, but the deeper layers are not. In most existing hydro stations, the turbine intakes are far below the surface, so the water that is passed to rivers downstream contains little oxygen. Low dissolved oxygen levels in the downstream water have an impact on fish and other aquatic species, since they depend on sufficiently high levels for survival.

Hydroturbine oxygenation systems address the issue of depressed levels of dissolved oxygen in rivers and lakes. There are many different solutions, ranging from relatively passive methods such as draft tube venting, to hypolimnion aeration using pure oxygen, a method often used to control temperatures in addition to oxygen levels for specific fish species. Efficacy of all methods for specific installations can be investigated with flow modelling.

As part of a Department of Energy (DOE) study to improve turbine aeration, Fluent Inc. partnered with american-hydro Corporation to develop American Hydro’s Retrofit Aeration System (RAS) further. AmerenUE’s Osage hydroelectric plant in Lakeside, Missouri was used as a basis for the project. CFD was used to study the effects of aeration before and after installing an RAS. The results ended up providing insight into the characteristics of both air and water flow.

Aeration systems often provide a flow passage for air in the head cover. It is drawn naturally through these flow passages because of the sub-atmospheric pressures downstream of the turbine runner, where air bubbles become dispersed in the water. The water-air mixture then travels through a draft tube before being injected into the downstream river flow. When designing the aeration system, it is desirable first to predict the turbine performance with and without aeration. Using the predicted air flow rate for the applied operating conditions, the uptake of dissolved oxygen in the water can be estimated. Insight into the air dispersion in the draft tube can also be gained.

To solve the interaction of air and water in the system, an algebraic mixture multiphase model was used. The water flow rate and the water level in the downstream river were supplied as boundary conditions such that the pressure distribution and air flow rate through the aeration system were then predicted by the simulation. In concert with the existing multiphase model, a new model for tracking dissolved oxygen was developed and implemented. The developed methodology was used to simulate a hydroturbine with a retrofit aeration system for a wide range of operating conditions. Figure 4 shows flow pathlines coloured by the volume fraction of air in the aeration system. This type of flow visualisation enables a level of understanding of the equipment performance not otherwise available to the design engineers.

The results from these simulations were in good agreement with available field data and contributed significantly to a better understanding of the air-water interaction in the draft tube. With this increased insight, several design modifications are now being considered to increase the air flow rate and the dissolved oxygen uptake in the downstream water body.

AmerenUE has also evaluated the feasibility of a different approach – raising the turbine intake to the surface to withdraw water with higher dissolved oxygen concentrations from the lake. In order to determine the effectiveness of this approach, a CFD model of the lake was developed. Thermal stratification and oxygen concentrations were imposed on the inlet boundary, 2km upstream from the dam. A late summer set of conditions was modelled, with temperature and oxygen profiles typical of the most extreme thermal stratification observed. Five scenarios were analysed corresponding to varying positions of the turbine intakes.

Figure 5 shows flow pathlines coloured by residence time from the domain inlet, 2km upstream of the dam. These are the paths that fluid parcels take, with the red portions taking the longest to reach the dam. This type of visualization can provide very useful engineering insight into the flow patterns in the lake and how inlets may be optimally located. Figure 6 shows pathlines, now coloured by dissolved oxygen concentration entering the turbine inlets for the case where all inlets are located at the bottom, showing that very little oxygenated water is passing through. Figure 7, on the other hand, shows the oxygen concentration coloured pathlines for the best case scenario, when only the house units are deployed and the inlets are placed at the surface. This design change shows a dramatic improvement, increasing dissolved oxygen concentration from 1.36 ppm to 4.88 ppm on average.

Hydroscience and Engineering (IIHR) at the University of Iowa has a wealth of experience in using CFD to analyse river and reservoir hydraulics; sediment and dissolved gas transport; as well as coupling CFD to individual-based ecological models to simulate fish motion and life stages of freshwater mussels. In addition to basic research, IIHR has provided services to utilities for studying various alternatives for fish protection at hydroelectric facilities. Notable examples are fish passage facilities at Rocky Reach and Wanapum dams on the Columbia river as well as the Behavioral Guidance Structure (BGS) and Surface Bypass Collection (SBC) alternatives at Lower Granite Lock and dam on the Snake river.

Over the years, IIHR has developed its own CFD tool, U2RANS, including special models for tracking total dissolved gas levels and linkages to fish behavioural models to track fish motion as a function of flow properties, an extremely promising technology for assessment of fish protection mechanisms. While this approach has been very successful, IIHR sees a clear advantage to focusing on research and physical model development and moving away from in-house CFD software development. As such, the institute has signed a partnership agreement with Fluent Inc. and is migrating its projects to the Fluent code (Figure 8). Planned future work includes the linking of dissolved gas and ecological models to the new Fluent platform.

One of the primary challenges of the 21st Century is meeting the rapidly growing power requirements of both the developed and the developing world while protecting our air, water, and natural resources. Managing such a challenge requires advanced tools that allow prototyping of solutions such that designs may be optimized before cutting metal and pouring concrete. As indicated in the above case studies, one of these tools is Computational Fluid Dynamics, and it is becoming increasingly prevalent in providing fish protection solutions for hydroelectric dams.

The authors would like to acknowledge the assistance of Alan Sullivan of AmerenUE, and Professor Larry Weber of IIHR in preparing this article.