Technical solutions for fish protection at water intake plants in rivers, lakes and seas can be split into mechanical and behavioural types. By Frank Rehnig 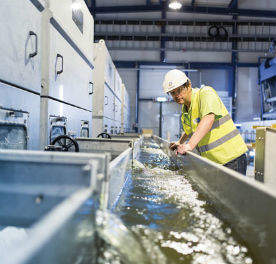 Water provides an important living environment for many creatures. Every intrusion poses a threat to what are often very fragile ecological systems. This statement is the starting point of a consideration of technical solutions for fish protection in the water intake process.

EU guidelines (92/43/EWG) for protecting flora and fauna are the basis of every protection measure. Their appendixes define both areas worthy of protection (Appendix 2) and the animal and plant types (Appendix 4 and 5) to be protected.The fish described in Appendix 4 and 5 occur in almost all European waters.

As every usage of open waters automatically interferes with existing aquatic life-forms, many projects cannot be approved, or, in the case of existing plants, authorizations may not be extended. Regulatory problems can only be avoided if applicants can prove that the best available techniques are being used to minimize the effects on the fish population, as well as meeting other environmental requirements.

But what is technically possible? Power plant operators, equipment manufacturers and biologists all answer this question very differently, and their differences often cause difficult discussions.

Each usage case has to be carefully considered, as effective fish protection is only possible using an intelligent combination of individual measures, tailor-made to meet local requirements.

"Generally we categorize fish barriers into behavioural and mechanical barriers."

Behavioural barriers can often be relatively easily and inexpensively installed into existing water intake structures. However, they only work truly efficiently when fish are offered alternative paths or territories. Furthermore, behavioural barriers always function selectively, meaning that not all fish types and sizes respond and can be completely redirected. Despite this, when used correctly behavioural barriers, including the use of electrical impulses as a repellent and fish immobilization systems, can reduce fish losses by between 80-90%. They require careful planning and are tailor-made to suit the individual case.

The most effective fish protection is to prevent fish from entering the intake process by means of behavioural barriers. The combination of proper civil engineering structure design and for example the GEIGER® Electrical Fish Repelling System helps ensure that nearly all fish larger than 8-10 cm are kept away from the plant water intake.

The fish repelling system has been found to be an effective behavioural barrier. This technology, which is currently installed in more than 50 plants, produces short electrical impulses. Fish feel the effect of the impulses and swim away from them. The system is installed in the area of the water intake, and makes turning off into the inlet channel unattractive. Between 2010 and 2011, detailed experiments that contributed to optimizing the technology and confirming the efficiency of the procedure were conducted under independent supervision. However it soon became apparent that just emitting electrical impulses into the water is not sufficient; the build-up in field strength needs to be precisely measured. On the one hand, if the field strength increases too rapidly, fish may be paralyzed. On the other, if the field strength increases too slowly, fish may no longer be able to recognize in which direction the field strength is decreasing, and hence be unable to find their way out. Another important factor is the frequency of the electrical impulses. Fish are unable to perceive frequencies that are too low; whereas frequencies that are too high prevent their ability to swim due to strong muscle contractions, and reduce the speed at which they can flee.

It is also important to correctly orient the lines of the electrical field. Fish will try to move in the direction relative to the electrical current that exposes them to the least differences in voltage. The field must be set up in such a way that they do not move into the excluded area. Fish cannot sufficiently perceive badly-shaped impulses or impulses that are too short; impulses that are too long increase the risk of paralysis. The build-up of the field must be completely homogeneous across the entire width and depth of the inlet as fish will find every weakness in the field. All of these requirements must also be fulfilled even in the case of fluctuating conductivity and level of the water.

Creating a computerized field simulation in the planning phase ensures compliance with all of these points. Simulation also enables a fish repelling system to be developed that fulfills difficult installation conditions, and can determine and deal with all of the drawbacks that may occur, for example, steel piling in the field area.

Electrical barriers can be used to prevent ingress of fish swimming both upstream and downstream. A deeply-structured electrical field that is designed to extend back to an area in which fish and cyclostomes can no longer swim against the current due to a mild paralysis prevents them from reaching upstream regions.

A large percentage of downstream-swimming fish can be repelled electrically if the current can be sufficiently perceived in the repelling area, and if the current speeds are low. If this is not possible, small fish that are weak swimmers will go through the electric field, making additional mechanical measures necessary. In areas with high-speed currents, for example in the upstream area of turbines, it is quite possible to use electricity to guide fish swimming downstream to a defined area of the current and then onto a bypass.

Some current-transported fish such as lampreys, juvenile fish and other forms of aquatic life can only be protected successfully by using mechanical barriers.

Mechanical barriers such as mesh screens are installed in the transition area between natural waters and the water use area to reduce ingress of aquatic life and water impurities. There are several kinds of screens, including passive screens with no moving parts cleaned with jets of air or water, or active screens with rotating filter elements arranged in a water wheel-type configuration that are cleaned by a fixed spray-wash system.

Screens are often arranged in two or three stages to perform two contrary functions. On one hand filters prevent ingress of the smallest aquatic life; for example, a hole diameter of less than 5mm is required for adult lampreys, and a hole diameter of around 2mm is required to protect young fish. On the other hand, multiple stages allow a way for fish that penetrate an outer barrier to return safely to the water source. The arrangement and design of the first cleaning step, which is for removal of coarse matter, must allow enough space for larvae and small fish that have passed the fish repelling zone. A special control system with defined stop positions and a slow ascent of the cleaner carriage allow fish to pass the coarse screen.

Special machines enable efficient return systems for fish, fish spawn and other important organisms which are already located in the intake duct. Fish return systems in screening plants are based on the use of bucket systems to remove fish and other organisms from the screens. The different systems mainly vary in the different ways that the fish buckets are emptied. These screen systems can be retrofitted into existing screening plants as a secondary (fine) screen.

The GEIGER MultiDisc® screen consists of a series of sickle-shaped mesh panels that are connected at the rear to a revolving chain that is guided by a powered sprocket wheel coupled to a drive unit at the top. The panels run in a frame installed across the channel, with the intake chamber across the direction of water flow. Raw water flows directly through the mesh panels. The debris retained at the face of the ascending mesh panels is transported in debris carriers to floor level, where it is removed by means of a spray device.

Special fish buckets attached to the screen panels retain some water during their upward travel, helping fish caught in them to breathe. As fish may stick to steel alloy surfaces, bucket surfaces are treated with a slippery composite material. As the buckets reach the top of the screen, they tilt, gently pouring water and fish into a return trough filled with water. A low-pressure spray header dislodges organisms stuck on the screen into the buckets. Fish only fall from a small height and do not dry out, as they are constantly in water. The fish buckets are emptied in an area separate to screen cleaning, and are returned to the water source separately from fine dirt.

MultiDisc® screens are available with a width of up to 3.4m and are suitable for channel depths up to 15m. Polythene mesh panels have a minimum hole diameter of 1 mm; stainless steel mesh has a minimum hole diameter of 1mm. Depending on the load, the screens rotate at speeds up to 30cm/s. When running without a load, very slow, continuous operation ensures that no fish remain in the fish buckets for longer periods of time. Flow capacity is up to 50,000 m3/hr per channel.

When the MultiDisc® cannot be used, an adapted version of the GEIGER® Travelling Band Screen provides another way for fish and other organisms to be returned to the water source. The conventional in-to-out travelling band screen is installed along the water flow direction with the open machine side facing the flow. Raw water flows through mesh panels on both sides of the machine, in which is a series of linked mesh panels mounted on a guide chain, through which the water passes in two streams. Screenings sticking to the inside of the mesh panels are transported up to a collecting trough on the operating floor level. Coarse screenings are thrown into the trough; fine screenings are cleared out by a washwater system. Machine length (in flow direction) ranges from 1m-4.5m, and chamber width (across flow) is 2.5-7m. Throughput is up to 100,000 m3/hr.

The fish protection version of the screen is wider than the conventional model to provide space for a separate discharge trough to collect the fish buckets’ contents. The actual cleaning of the screen with pressurized water takes place once the buckets have been completely emptied. The special design of the machine helps limit the falling height of the fish and enables fish and fine dirt to be removed separately. Mesh with perforations of up to 0.5mm ensures that smaller larval stages are also preserved. Fish-friendly wedge-wire profiles may also be used in the screens.

Travelling band screens such as those described above, with in/out flow (from the centre), are more preferable from the point of view of fish protection because they enable fish buckets to be emptied more gently. It is also possible to retrofit fish buckets onto out-to-in (dual flow) travelling band screens, although the falling height may be fairly high, and it is not possible to separate the fish bucket emptying area from the screen cleaning area.

A GEIGER® Fish Immobilization System should also be planned to overcome the fishes’ instinct to flee from the machines. This prevents fish from moving, making it easier for them to be collected by the fish buckets.