First test of a dynamic technique

TDI has conducted the first ever dynamic test on a turbine engine component that combines cycled thermal and mechanical stresses in a single procedure. Although early test runs are likely to be on aero engines, they are applicable in principle to components in all high speed rotating machines. 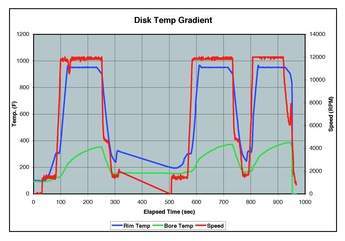 The combination, which adds cyclic variations in thermal loading to the existing advanced spin thermal mechanical fatigue gradient procedure, enables TDI to conduct complex tests that simultaneously measure the combination of thermal and mechanical stresses on a rotating engine component. TDI’s definition of TMF cycles on a rotor is that it synchronises rotor speed with the formation of the gradient in a similar manner to an engine in operation. The synchronisation can be in phase (temperature gradient rises with rotational speed), out of phase (temperature gradient decreases with a rise in rotational speed, or vise versa), or something in between.

The norm, until now, during a mechanical stress test has been to keep the thermal gradient constant. But through an ingenious combination of heating and control algorithms the temperature gradient can be cycled, in or out of phase, with the mechanical loading. A test of this kind more accurately simulates low cycle fatigue (LCF) conditions by combining thermal gradients – that is, the cooler-to-hotter temperature differences in the component from its bore to its live rim – with rotational speed, ie mechanical load, on the component being tested. This new technique provides the best substitute currently available for testing in a running engine. The challenges to engine tests are the cost ($100,000/hr or more), and quality of the data due to restricted space, electronic noise, environmental conditions, etc. Spin rig testing is usually component specific, and the data quality is better.

This advanced form of TMF is most applicable to engines that exhibit a relatively large number of cyclic variations in temperature and speed over a given time period – engines that ramp up and down or are switched on frequently. The extreme case is that of aero engines which are more susceptible to the faults that can be picked up by TMF than are industrial gas turbines for power generation in general. IGT’s that do not cycle frequently are better suited for standard thermal gradient testing since they tend to run for longer periods between cycles.

Although the current focus is on high pressure end compressor rotors the technique is applicable in principle to turbine blades in the hot gas path. TDI has recently completed a feasibility study for economically testing steep thermal gradients through thin walled structures such as hollow turbine blades. The result of the study was the conceptual design of a test rig that can accommodate actual blades, blade-like samples, or basic material samples.

Current LCF testing methods use isothermal conditions, which do not account for the severe stresses experienced when rim-to-bore thermal gradients exist. But using ‘Advanced Spin’ TMF testing, the performance of components such as bladed assemblies at the high pressure end of a turbine compressor can be replicated and analysed under real-world conditions with extremely high accuracy. It is believed that no organisation has ever before synchronised a thermal gradient with rotational speed effects (either in phase or out of phase) in a spin rig.

TDI president Robert Murner explains the benefits of the company’s breakthrough. ‘Because the Advanced Spin platform measures both thermal gradients and mechanical stresses simultaneously under realistic operational conditions, the data generated by this kind of testing provides a far more accurate picture of component and engine performance than previous methods have been able to deliver.’

TMF testing is a development of mechanical fatigue testing of materials. The superimposed temperature cycles have – in most cases – the same frequency as the mechanical loading cycles, but have different phase shifts. If it is zero, ie in phase, a tensile force is applied to the specimen while it is being heated. If the phase shift is 180° the sample is being cooled while in tension. A phase shift anywhere between 0 and 360° can be applied to fit the requirements for the tested material in the real conditions it will meet in use.

TMF testing is mainly carried out on machine components prior to technical implementation of the part, the turbine blades of aero engines and gas turbines being prime examples. The material is tested with parameters (eg given temperature range, given maximum forces or stresses, cooling rates, phase shifts, etc) that resemble the usage profile of that material. TMF test results are used (among other test results) to determine the total lifetime of a part as well as maintenance intervals.

TDI routinely uses a range of heating methods including high frequency induction that enable heating rates of up to 50 ºC per second to 1000 ºC to be achieved but for this specific TMF test the desired effect was achieved by using quartz lamps positioned at the rim (outer diameter) of the component. The gradient ran from the hot rim to the cooler bore. TDI easily achieved its target gradient of over 400°F. Active bore (inner diameter) cooling was available but not needed in this case to hold the desired gradient. Other modifications to the rig included the development of specific software algorithms, user interfaces and so on for data acquisition and control.