First 6 MW PMG comes off the line at St Nazaire

In February GE Power Conversion successfully completed manufacture of the first serial permanent magnet generator to be made at GE Renewable’s offshore wind factory in Saint-Nazaire, northwest France. The 6 MW PMG is among the world’s largest generators ever built for a WTG and is the first of a series of 300 units that are planned to be manufactured on the site during the next few years. GE inherited the facility as part of its acquisition of Alstom’s power business in 2015. The first completed generator is to be installed in a Haliade 150-6MW offshore wind turbine located in Denmark. 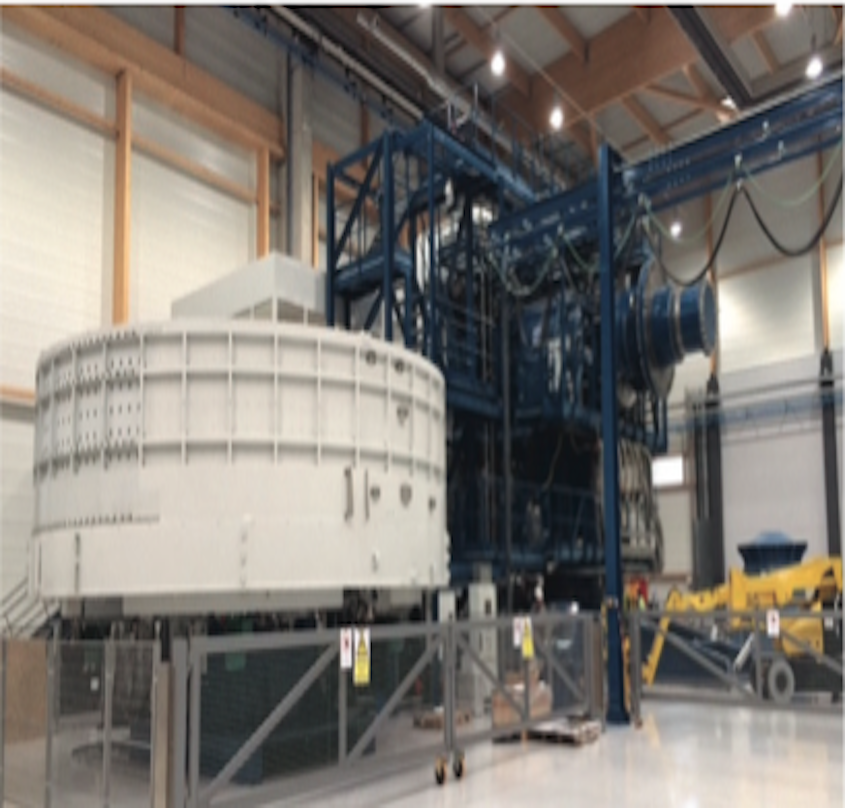 The turbine’s power yield is said to be 15% higher than that of other same-generation wind turbines. Its direct drive system has no mechanical gearbox coupled to the generator. Low component count increases equipment reliability and therefore enables higher energy efficiency, which also leads to increased turbine availability. Less downtime and maintenance requirements ultimately can reduce the cost of wind energy.

The generator is split into three electrical circuits. If two circuits should fail and go offline, the high level of redundancy enables the turbine to continue producing power even in its ‘degraded’ mode. This is a critical element for offshore wind power plants as stormy weather and turbulent water can delay repair work for days or weeks, and occasion very high maintenance costs.

The company at the centre of GE’s Power Conversion business is the former Converteam, which had delivered its first permanent magnet generators for 5 MW wind turbines in 2004, and was subsequently 90% acquired by GE in March 2011. In the same month it was announced that Alstom and Converteam would be collaborating on developing the world’s largest direct drive permanent magnet generator for a wind turbine. Then in December 2014 Alstom opened its new factory at St Nazaire, the first offshore wind manufacturing site in France, for the production of nacelles and generators for the Haliade 6MW WTG, with the aim of producing 100 units per year. Its first output was six Haliade turbines destined for the 30 MW Block Island offshore project in the US.

The factory site is a highly sophisticated production unit that uses an air-cushion system to move generators around within the facility. This innovative way of manufacturing eliminates the need for cranes within the factory, significantly driving down the infrastructure costs. The site is also equipped with a test bench, to ensure that every generator coming out of the assembly line is ready to be deployed.