After completion China’s Three Gorges reservoir will have a total storage capacity of 39.3Bm3, of which 22.15Bm3 will be for flood control, resulting in the flood control standard in the Jingjiang reaches of the Yangtze raising from less than a 10-year frequency to a 100-year frequency, writes Wang Rushu 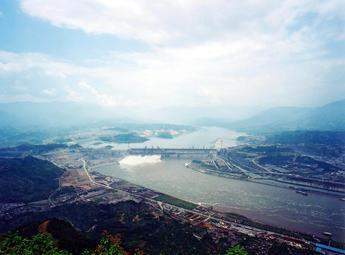 CHINA’S Three Gorges scheme is a vital project to harness and develop the Yangtze river. The main development objectives of the project are to protect the middle and lower reach area of the Yangtze from flooding, supply a large amount of electricity to east and central China and small parts to the east of Chongqing municipality, and improve the navigation condition from Yichang to Chongqing on the river.

Upon completion, the Three Gorges reservoir will have a total storage capacity of 39.3Bm3, of which 22.15Bm3 is for flood control. The flood control standard in the Jingjiang reaches of the Yangtze could be raised from less than 10-year frequency to 100-year frequency as a result. This means that if a flood, such as the one that occurred in 1870, was to reoccur, a great number of lives could be saved. The project has been developed to create an improved living environment and increase the potential for further development in this densely populated and economically developed area. There will also be several other benefits from the regulation of the reservoir, such as the prevention and cure of schistosomiasis, and the extension of the life span of Dongting Lake due to less deposition of sediments.

The plain and lake region in the middle and lower basin cover an area of 126,000km2, having more than 6Mha of farmland and a population of 75M. It has been one of China’s major bases for producing commodity grain, cotton and edible oil, and is also an economically developed area. As the ground elevation is more than 10m lower than the Yangtze river’s flood level, this area has been suffering from the most concentrated, frequent and severe floods and water logging disasters. Historical records show that 214 floods occurred in the region in about 2100 years from the Han Dynasty to the late Qing Dynasty (185BC-1911) averaging once every 10 years. During the last century four severe flood disasters occurred in 1931, 1935, 1954 and 1998. In the 1931 and 1935 floods, 145,500 and 142,000 people were killed respectively, and 3.4M and 1.5M ha of farmland were inundated. Even in 1954 when a great victory was achieved in fighting the flood, more than 33,000 people still lost their lives, 3.2Mha farmland was inundated and the Beijing-Guangzhou railway was suspended for about 100 days.

In August 1998 more than 6M people and the army joined in the fight against the flood, resulting in the protection of Wuhan and Shashi city. However, 1526 people were still killed and 240,000ha of farmland inundated. These floods have not only caused huge property damage and loss of life, but also serious destruction of the ecosystem and environment.

Presently the flood prevention standard in the reaches has been much improved from a 10 year to 20-year flood frequency. However, in the case of a 100-year or higher flood, both the northern and the southern main dikes would surely burst. After such a flood swept the broad plain region in the middle and lower reaches, a destructive disaster could be incurred, severly disturbing the ecosystems and the environment.

The Three Gorges project will install 26 700MW units, with a total installed capacity of 18,200MW and an annual output of 84.68BkWh. The hydroelectricity produced will replace 50Mt of raw coal to be burnt annually for thermal power plant, reduce about 100Mt of CO2, 2Mt of SO2, 10,000t of CO, 370,000t of NOX emissions, together with a large amount of waste water and waste solids. These will not only be beneficial to increase annual power generation income, but will also improve the environment of middle and east China, especially for prevention of acid rain damage and the greenhouse effect.

The reservoir will improve navigation conditions from Yichang up to Chongqing and fleets of 10,000t towboats will be able to pass through Shanghai up to Chongqing port. The annual one-way downward passage capacity will be increased from the present 10Mt up to 50Mt and the transportation cost will be decreased by 35-37%.

Other benefits to the project are that it will improve the local climate, enhance the water quality below the dam during the dry season and supply clean water for inter-basin water transfer from south to north. Moreover, the operation of the project will ease the salt water intrusion in estuary region. The increase of water
surface area will promote the aquatic culture and tourism in
the reservoir.

The project consists of three major parts: the large dam across the Yangtze river, the hydroelectric power houses and the
navigation structures.

The dam will be a concrete gravity type, with a crest elevation of 185m above sea level, a dam axis length of 2335m, and maximum height of 183m. The spillway section is located in the middle of the riverbed, with the intake dam and non-overflow dam sections on both sides of the spillway section.

The power houses will be placed at the toe of the dam on each side. In the left and right power house, 14 and 12 sets of turbo-generators will be installed respectively.

The navigation structures will be situated on the left bank. The permanent navigation structures will consist of double-lane and five step ship locks and a single one-stage vertical hosting ship lift, with the annual one-way passing capacity of 50Mt. In addition, a single one-stage temporary ship lock will be constructed in coordination with the diversion open channel to meet the navigation requirements during construction.

The construction of the project will be arranged in three phases. Construction started in 1993, with the Yangtze main river course diverted on 8 November 1997 and the right bank open channel diverted on 6 November 2002. Between 1-15 June 2003 the reservoir was impounded from 66m-135m elevation. The ship-lock was operated on 16 June 2003 and the first batch of turbo-generating units was put into commission in July.
The whole project is expected to be completed by 2009, meaning the construction, including the preparatory period, will have lasted for 17 years.

The Three Gorges reservoir resettlement, following development-oriented resettlement policies and schedule requirements for reservoir impoundment, will be implemented step by step according to resettlement planning.

After completion of Three Gorges, the middle and lower reach flood control ability of the Yangtze will be improved. However, the flood capacity of Three Gorges is still insufficient. A large amount of flood volume from an 800,000km2 catchment area in the middle and lower reach could still be poured into the Yangtze river. In the case of a peak flood, such as the one that occurred in 1958, the middle and lower reach will experience higher water levels. Jingjiang and Chenglinji will likely still have 39.8B and 33.6Bm3 extra flood volume respectively. Hence, other measures should be taken to improve the Yangtze rivers flood control, such as dike reinforcement, maintenance of the diversion projects, construction of water resources and water and soil conservation works in the upper Yangtze.

Effectively controlling the flood of the upstream Yangtze river could result in the flood threat to Wuhan being avoided. Except for the original diversion discharge, Wuhan could increase 22.15Bm3 of flood control capacity from Three Gorges reservoir.