Fighting the fear of failure 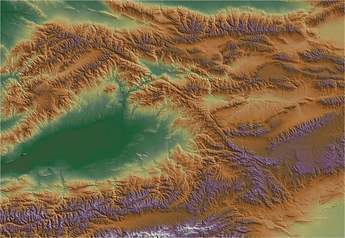 Talas-Fergana is a 700km long fault line in Kyrgyzstan, Central Asia. Although familiar to geologists little is known about this particular fault, except that it exhibits geological characteristics similar to the San-Andreas fault line in the US. Indications from Kyrgyzstan are that it has the potential for an earthquake of similar intensity to those that occurred on San-Andreas in 1857 and 1906.

‘We now know that the Talas-Fergana fault has a long history of activity with the last faulting event occurring recently in geological terms, approximately 400-500 years ago,’ says Derek Rust a geologist at the University of Portsmouth in the UK. ‘The longer the period of time since the last ground rupturing earthquake, the greater the next earthquake is likely to be. Another event is inevitable. It’s just a case of when.’

One factor will make the potential consequences of the next earthquake even more catastrophic. The Talas-Fergana fault line cuts across Toktogul, the largest hydroelectric and irrigation scheme in Central Asia.

The Toktogul project is a 1200MW scheme with a 230m high dam impounding a 20km3 reservoir. It provides power and irrigation water to Kyrgyzstan, Uzbekistan, Tajikistan, Kazakhstan and Russia. The countries’ competing demands for power and water mean that Toktogul is already the focus of cross-border tensions. The scheme is considered to be vital for the region’s economic, social and agricultural stability. Disruption could be catastrophic, putting the countries’ already fragile economies at risk, provoking civil unrest, and providing opportunities for the region’s extremist groups to exploit the resulting disorder.

‘These are Central Asian countries that used to be together in the Soviet Union,’ Rust explains. ‘Now they are all independent and relationships can be strained. For example, over 75% of Kyrgyzstan is mountainous terrain over 2000m high. It is very cold and there are high power demands for heating in the winter. So at the end of the summer, high water levels are required for the reserve of power. In contrast,’ Rust adds, ‘downstream Uzbekistan’s prime interest is irrigation. So it needs high water levels for use in the summer. There are major competing interests here and if this scheme was to fail through seismic activity it could be catastrophic.’

Compounding this situation are 23 uranium mining waste dumps in the region. Kyrgyzstan was the chief uranium mining area for the Soviet Union; while earlier gold mining left a legacy of mercury rich mine tailings. Both these are vulnerable to seismically triggered landslides and the sudden release of water. Furthermore, over 10M people live in the most threatened area downstream from Toktogul in the Fergana Valley.

‘The violent ground shaking associated with a great earthquake on the Talas-Fergana would be expected to generate significant landsliding in this mountainous region. This is what happened with the Sichuan earthquake in China in 2008,’ Rust explains. ‘Landslide masses entering the reservoir have the potential for generating damaging tsunami effects. Outside the reservoir it is likely that landslide-dammed lakes would be created, as in Sichuan. These have the potential for sudden release of impounded waters causing flooding downstream, and possible mobilisation of the uranium mine waste dumps. Existing landslide-dammed lakes, probably associated with past great earthquakes, also have the potential to be breached in the event of a new earthquake.

‘Understanding the real threats to the environmental security of this region, and finding ways to mitigate against these, is crucial to avoiding conflicts over water and power supplies, and avoiding extensive pollution of vital lands,’ Rust adds.

Toktogul hydro project is now the focus of NATO’s Science for Peace project. Rust is the country project director and over a three-year period his team will research the geo-environmental security of Toktogul. They will examine existing seismic data and gather new information from satellite sensing imagery, aerial photography, radiocarbon dating of geological features and use portable seismometers.

‘Ours will be the first seismic hazard assessment of the Toktogul region,’ says Rust. He explains that due to the hydro scheme’s positioning on border territory between the former Soviet Union and China, the area was previously out of bounds to western scientists. Little research was done by the Russians as, when Toktogul was built in the 1960s, the country’s mainstream geology establishment had actively dismissed the appreciation of plate tectonics. Consequently the significance of the Talas-Fergana fault line went unrecognised.

‘We are not directly studying the engineering integrity of the dam itself,’ says Rust, ‘but rather the implications of seismic activity on the reservoir and surrounding region. A breach of the dam would be a catastrophic event. So we will recommend mitigation measures to reduce these hazards and emphasise avoiding potential hazards in the future by wise planning. Although it is too early to say yet if we will suggest more active measures to reduce risk.’

To minimise seismic effects the research team will anticipate which reservoir slopes may fail and will be able to map these. They can also anticipate run-off from disturbing water in the reservoir through tsunami effects, while a better understanding of which uranium dumps are most vulnerable to ground shaking will be invaluable. Further active measures could include avoiding reservoir areas prone to run-up, dewatering slopes and providing good drainage to reduce the likelihood of failure.

Researchers from the University of Milan-Bicocca in Italy, and the National Seismological Institutes of Kyrgyzstan and Uzbekistan, started work on the Science for Peace project in October 2008. Upon completion, the main findings of the study will be presented to the governments of the affected countries in 2011. Project director Derek Rust has nothing but praise for the NATO initiative and the way it has embraced his work.

‘We think that this kind of project at Toktogul is invaluable, but it does not immediately fit with some of the established funding agencies,’ he concludes. ‘The fact that NATO promoted the political and scientific benefits of this project is fantastic.’