As Russia’s next generation sodium-cooled fast reactor, BN-800, nears commercial operation, we look at the recent progress the country has made in closing the fuel cycle. 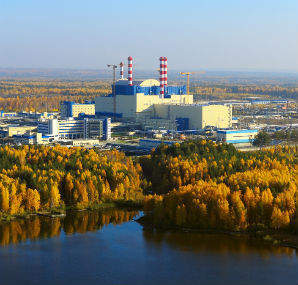 Work on fast reactor development was started in the 1950s in all leading countries pursuing nuclear power – the USA, France, Great Britain and then Germany, Japan and India. Later, China and South Korea started working in this area. However Russia has had more progress than any other country.

The first fast reactor designs were drawn up by the Soviets in 1949, and in 1955 the BR-1 zero power reactor was commissioned at the Institute of Physics and Power Engineering (IPPE) in Obninsk. In 1959 the larger BR-5 was commissioned and acted as a testbed for the first sodium-cooled reactors. It was later upgraded to 8MW capacity and became known as the BR-10. In 1969 the BOR-60, with a power capacity of 60MWe, was commissioned at the Research Institute of Atomic Reactors (RIAR) in the city of Dimitrovgrad, near Ulyanovsk. On the basis of research done at these institutes, the BN-350 reactor in Kazakhstan and the BN-600 at Beloyarsk were commissioned.

Today, the only sodium-cooled fast reactor under commercial operation is the BN-600 at the Beloyarsk nuclear power plant in Russia. BN-600 has been under continuous operation for almost 30 years and has been instrumental in development of the closed fuel cycle in Russia.

The BN-600 is a three-loop design with the reactor and primary pumps submerged in a large pool of liquid sodium. The secondary circuits comprise three loops each with a steam generator and a secondary sodium pump. The steam supplies three 200MW turbines. Each steam generator consists of eight sections comprising an evaporator, superheater and reheater, which are connected by manifold and can be isolated on both sodium and steam sides.

Over its operating life the BN-600 reactor has been upgraded and the lifetime of its key components (including the steam generators, sodium pumps and intermediate heat exchangers) extended. This led in April 2010, to the Russian nuclear regulator, Rostekhnadzor, issuing a licence for the operation of Beloyarsk 3 until 31 March 2020. During the licensing process, studies were performed to validate the lifetime of the reactor components for 45 years of operation, which means another five-year licence extension may be possible in future.

Recently, a milestone was achieved in the construction of Russia’s next generation sodium cooled fast reactor, the BN-800 at Beloyarsk 4. Construction of the BN-800 and plans for a larger BN-1600, began in 1984, with startup of the BN-800 then planned for 1992. But after the 1986 Chernobyl accident in Ukraine, construction of all new nuclear plants in Russia was frozen. Later, in the 1990s, construction was delayed because of the economic situation in the wake of the Soviet collapse. During this period, the project was improved to take account of state-of-the-art technology and revised regulations concerning reliability, safety and ecological requirements. Construction began in earnest in 2006.
Viktor Saruda, general director of Uralenergostroy, general contractor for all the Beloyarsk units, described the construction of Beloyarsk 4 as a "bridge between the past and the future."

The new unit includes a large number of design and technological improvements over BN-600. Fundamental features of the BN-800 reactor include an active reactor protection system with a passive system that works automatically in the event of loss of sodium-cooling liquid pressure, according to Rosenergoatom. During normal operation, the reactor’s control rods float in the cooling liquid on top of the reactor core. If cooling liquid pressure drops, the rods fall into vertical control rod channels in the reactor core and stop the chain reaction by absorbing neutrons. It also has a passive supplementary air-cooling system, used to remove of residual decay heat.

In summer 2015, the physical startup of the BN-800 was completed, and the 789MWe unit reached 0.13% of minimum controlled power on 31 July. The unit first achieved minimum controlled power a around a year earlier, with the start of operation planned for the end of 2014. But in December Russian nuclear utility Rosenergoatom announced that nuclear fuel for the unit needed to be developed further. The unit is now expected to enter commercial operations before the end of 2016. On 9 November, Rostechnadzor approved Rosenergoatom’s amendments to the unit’s operating licence, allowing it to start up.

Russia is now considering further expansion of the Beloyarsk plant with the construction of unit 5 which would have an even larger 1200MWe reactor. Afrikantov OKBM is designing this BN-1200 reactor; the completion of which is planned for 2016-17.

Rosenergoatom says construction of this unit would be easier and faster because many infrastructure facilities, which are already in place on the BN-800 site, are designed for two power units. There is also a team of builders, with experience accumulated in the course building the BN-800.

In addition, Mox-fuel manufacture has been launched at Rosatom’s Mining and Chemical Combine (MCC) in Zheleznogorsk. The Mox fuel manufacturing facility, located 200m below ground at MCC will satisfy the demand for the nuclear fuel for BN-800 reactors at Beloyarsk nuclear power plant. The facility is designed with an output of 400 fuel assemblies a year.

PA Mayak in Ozersk will supply the plutonium for the Mox fuel, and the uranium will be supplied by MCC. Mashinostroitelny Zavod is supplying the component parts for the BN-800 fuel assemblies.

The fuel development programme foresees the scale-up production of MOX-TVS for the BN-800 reactor with a switch to full loading (about 400 assemblies) in 2019. The BN-1200 reactor is also expected to use Mox fuel. ¦