Share price trends over the past five years are examined for five large European utilities, of what might be described as the traditional type: E.ON; Endesa; ENEL; RWE; and SSE. EDF is shown in the comparative chart, and will be the subject of a future article. David Flin 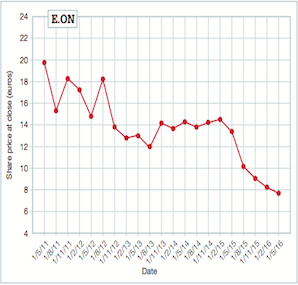 The earnings situation in 2015 was partly a result of E.ON writing down by €8.8 billion its generation assets due to assumptions regarding long- term development of power and fuel prices. Vincent Giles, an analyst at Credit Suisse, said recent results for E.ON were “confirmation that the economic environment is terrible for the company, with commodity prices lower and the price of power down 50% in the last four years.”

In 2014, E.ON announced its intention to split into two independent companies, E.ON and Uniper. The company said it plans to formally undertake this separation during 2016. E.ON will focus on renewables, energy networks, and customer solutions, while Uniper will “focus on the conventional energy world”. E.ON plans to continue to invest in wind farms and solar power, smart network technology, and CHP plants. Meanwhile, Uniper will have a conventional generation fleet of about 40 GW in Europe and Russia.

In April 2015, along with RWE and the Swedish energy group Vattenfall, E.ON launched a claim in the German courts for compensation from the government, accusing it of expropriating their nuclear plants.

Over the last five years, E.ON has been actively reducing its debt obligations. The reduction in 2015 was achieved by E.ON divesting its exploration and production business in the North Sea, its operations in Spain, its generation business in Italy, and its remaining stake in E.ON Energy from Waste.

Michael Sen, CFO of E.ON, estimated that just under two-thirds of E.ON’s future earnings will come from regulated and quasi- regulated businesses, significantly more than is currently the case. The company will, he said, also have much less exposure to risks from the fluctuations of commodity prices and exchange rates. He said: “A high degree of earnings stability is a good way to get E.ON back on a growth path.”

Endesa has faced a difficult situation in the Spanish domestic market, with the economic hardship of 2012 onwards causing a decline in electricity demand in Spain. This, along with transferral of its 100 per cent stake in Endesa Latinamérica and its 20.3 per cent stake in Enersis to Enel Energy Europe resulted in a marked decline in revenue. It also sold its interests in four power stations in Ireland to SSE at a loss of €300 million in order to raise capital.

As a result, investment analysts have, for the last year, been advising that Enel will outperform the market, with 14 out of 28 analysts polled rating it as Buy.

Enel has announced its strategic plan for 2016-2019, in which it outlined five areas in which it would focus its efforts. These areas are:

Over the five-year period, RWE had relatively flat revenue streams and operating expenses.

However, the low price of electricity, combined with the decisions of the German government, notably on nuclear, has resulted in RWE witnessing tough times, with the company writing down the value of its power generation assets by €3 billion in 2015, resulting in a net loss for the year, and the scrapping of its dividend. Deepa Venkateswaran, an analyst at Sanford C Bernstein, said that by scrapping the dividend, RWE was signalling to the German government that it was in dire straits financially, that it had done all it can, and needed to have its liability for nuclear waste capped.

Fitch downgraded RWE’s credit rating to BBB from BBB+, after what it described as “further deterioration” of RWE’s operating environment. Fitch cited the problems in the UK, which began in 2011 with installation of a new IT system, and led to over 500 000 bills being issued late between September 2013 and December 2014. Fitch said: “Problems with delivering the bills and the lack of adequate operations controls led to a write down in expected revenues, higher bad debt provisions, and increased IT costs, which make the UK supply division unprofitable in the medium term.”

In response to the challenging conditions, RWE decided to pool its renewables, grid and retail operations into a new subsidiary, and formally launched operations of this new company. Peter Terium, CEO of RWE, said: “With the new company, we will create a platform for growth which can refinance itself directly on the capital market. Initially, we want to increase the new company’s capital by about 10 per cent by issuing new shares, and use the proceeds to accelerate the expansion of renewable energy. The goal of the restructuring is to stabilise margins and raise our competitive position by 2018.”

In the company’s 2015 annual report, Terium concluded: “Our earnings forecast shows that RWE has not yet reached the low point.”

SSE has faced tough operating conditions, with several politically destabilising factors coming together to create uncertainty, not least the referendum on independence for Scotland and Brexit.

SSE has decided it is an essential part of its business strategy to convince the consumer that it is behaving in what it describes as a responsible manner. It was the first FTSE100 company in the UK to give an enhanced public tax disclosure, to demonstrate that it is not engaged in aggressive tax avoidance. Alistair Phillips-Davies, Chief Executive at SSE, said: “There is a world of difference between aggressive tax avoidance and sensible tax planning. Tax avoidance means bending the rules; tax planning is simply using tax rules in the way in which they were intended to be used.”

SSE has seen its revenue rise slightly over the five-year period, from £28.3 billion in 2011 to £31.7 billion in 2015. It has kept its total operating expenses reasonably constant, at typically around £30 billion each year. Its debt has remained stable, but it has been improving its debt/equity ratio by increasing its equity value.

It will be interesting to see if SSE’s stated commitment to ethical behaviour and tax transparency will have a long-term positive impact. SSE has said that its revenue stream is largely dependent upon domestic consumers, and it needs to have the trust of these consumers for it to succeed in the utility market.