After compiling statistical data on costs of electrical and mechanical equipment for 81 selected hydro power projects (60% 2007-2008 and 40% 2002-2006), useful diagrams which allow a close cost estimation of E&M in powerhouses with Pelton, Francis, Kaplan, Kaplan-Rohr, Bulb turbine or Francis pump turbines have been composed. Paper by Cesar Alvarado-Ancieta 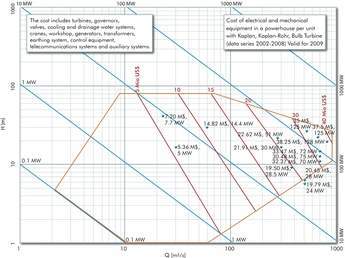 Many mathematical formulae (Gordon-Penman, 1979; Nachtnebel, 1981; Gordon, 1981, 1983; Gordon-Noel, 1986; Aggidis-Luchinskaya-Rothschild-Howard, 2008) have been developed for estimation of costs, or generating costs, of small and large hydro power projects. These often focus on specific topics such as costs of the dam type, tunnelling work, penstock installation, civil works for powerhouses, electrical and mechanical equipment for powerhouses, etc. Focusing on E&M equipment, the existing formulae have been developed taking into account specific cost data for a region or country, while also considering global costs of planning a hydro plant.

When working on a project, hydro consultants need to carry out a cost estimation analysis for each specific case. This can be a time-consuming task when carrying out feasibility studies and final reports. Therefore, a detailed analysis of costs continually needs to be carried out. The author has developed a simplified methodology based on current information from E&M equipment contractors or suppliers.

Useful diagrams which allow a close cost estimation of E&M equipment in powerhouses which feature Pelton, Francis, Kaplan, Kaplan-Rohr (for low heads up to 15m), Bulb or Francis pump turbine units have been developed based on the compilation of statistical data for over 81 hydro power projects. The data was obtained from existing publications, journals, call for tenders, award of tenders, websites and suppliers of E&M equipment. The data also contains projected costs from some projects – found on existing reports or national authority references.

The compiled data corresponds to information of the E&M contracts for powerhouses only, which include costs of turbines, governors, valves, cooling and drainage water systems, cranes, workshops, generators, transformers, earthing systems, control equipment, telecommunication systems (including remote central control room) and auxiliary systems (including draft tube gates, heating and ventilation, domestic water and installation). Other electrical and mechanical equipment not suitable for use in powerhouses are not included. The global amount of contracts obtained from suppliers comprises the items mentioned above with a few exceptions (mainly due to the fact that some suppliers only provide either electrical and mechanical equipment and not both). However, these main suppliers are always in consortium – meaning the global cost of E&M is not affected.

The hydro plants have net heads ranging from 9m to 800m and power capacities from 0.5MW up to the 800MW per unit. Taking into account the cost inflation over the past few years, the costs of E&M equipment for the period 2002-2008 have been revised and updated. These include different factors such as price of metals, project region, index of prices, exchange rates, escalation of prices and cost confidence.

The result of this analysis is the availability of 81 points to be plotted with data on installed power capacity (P in MW), net head (H in m), design discharge (Q in m3/sec), number of units and total costs of E&M equipment (Cost in million US$) in order to provide 81 points per generating unit. These are divided by type of turbine: Pelton, Francis, Kaplan, Kaplan-Rohr, Bulb or Francis pump-turbine.

Figure 1 shows the 81 points available on E&M equipment plotted by global costs and installed power capacity. A general tendency is found as a function of the power capacity, which serves as a reference for estimation of E&M equipment in generating costs under the proposed formula:

where P is the power or installed capacity in MW.

Formulae based on parameters such as head, design discharge, power and/or number of units have a large range of variablity in the result of costs, therefore they should be limited depending on different range of heads, discharge, etc. These type of formulae cannot be easy applied for cost estimation of E&M equipment of the different type of units. Therefore, the methodology followed here is based on the appliance of cost estimation diagrams, which are considered more suitable taking into consideration the parameters available for a hydro plant.

In order to plot the data the envelope curves for the three main types of turbine were defined according to available information from manufacturers. The rated flow and net head determine the set of turbine types applicable to the site and the flow environment. Suitable turbines are those for which the given rated flow and net head plot within the operational envelopes (the envelope curves are described on Figures 2, 3, 4 and 5). A point defined as above by the flow and the head will usually plot within several of these envelopes. It should be remembered that the envelopes vary from manufacturer to manufacturer and those plotted here are the usual operational envelope curve for Pelton, Francis, Kaplan, Kaplan-Rohr and Bulb turbines. Together with the defined envelope curves for the range of head and discharges, the additional scale for installed power has been plotted. This means the parameters of head (H), discharge (Q) and power (P) are available for each plotting position. These are defined together with a cost per unit. The different points define the probable curve of cost among the available points.

Costs of E&M equipment for hydro plants with Pelton units

The available data comprises 20 plotting positions for HPPs with Pelton units (see Figure 2). The range for determination of costs starts from a lower cost of US$0.5M for an installed power below 1MW to an upper cost of US$60M for 200MW installed power.

Costs of E&M equipment for hydro plants with Francis units

The available data comprises 43 plotting positions for plants equipped with Francis units (Figure 3). The determination of costs ranges from US$0.5M for 1MW installed capacity up to a maximum cost of US$120M for an 800MW plant.

The available data comprises five plotting positions for plants equipped with Kaplan, Kaplan-Rohr and Bulb units (Figure 5). The range for determination of costs on E&M equipment starts from a lower cost of US$20M for an installed power of 70MW up to US$70M for installed power of 380MW.

• Diagrams have been developed to estimate water to wire power plant equipment costs within an accuracy of 5 to 10 %.

• Equipment costs are currently escalating at about 8 to 10% per annum for projects from 2008. Price escalation of hydro power projects from the year 2002 can reach between 70 and 80% for a period of seven years. It is expected, however, that inflation costs will come down as a result of the current credit crisis.

• The diagrams presented were found suitable for a close estimation of costs of E&M equipment per unit under a comparison of costs from current hydro power projects. These diagrams have been developed to provide a quick way to determine costs of electrical and mechanical equipment (at pre-investment, due diligence study, pre-feasibility and feasibility level) based on main parameters such as head, design discharge and power.

• The value of the cost curves in the diagrams needs to be updated each year.

• The original data set was composed of 89 plotting positions, but eight points have unsuitable locations in the diagrams, particularly the Francis turbine and pump-turbine charts. Such points were not used. As an example, the cost of E&M equipment for La Muela II pumped storage project in Spain – according to the information reported in July 2008 – was US$55M for four units of 213MW each, a head of 520m and a unit discharge of 48m3/sec. It will mean a cost per unit of around US$14M. It is considered that some factors influence the cost estimation of these units, leading to an underestimated contract cost value. Seven points of projects awarded in the last two years had similar underestimated contract cost. The causes for these underestimated values were not found.

• An improvement in data available could be performed taking into account the type of turbine axis. This can have a significant impact on E&M equipment costs.