Changing environmental laws in Europe mean hydro plant operators have to provide protection for a wide variety of fish species. This has led to the development of new technologies and techniques to better cater for the water’s inhabitants 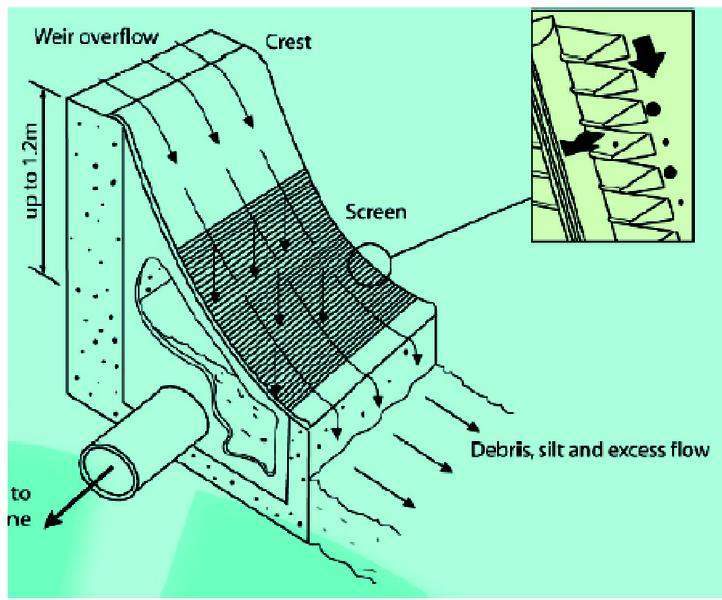 UNTIL recently, hydro power operators in the UK have been required to cater only for the migrations of salmon and sea trout past their facilities. But as European law takes effect, many rivers in the UK and elsewhere in Europe have been designated Special Areas of Conservations (SAC) under the Habitats directive. This, along with other conservation measures, has ‘raised the bar’ for hydro power operators, who may now have to ensure the safe passage of a wide variety of fish species.

Of the various species of fish that live in our rivers, few have been more highly valued than the Atlantic salmon and its close relative, the Sea trout. The protection of these species at mill and hydro power sites is enshrined in fisheries laws that date back well over a century, and has required mill and turbine owners to provide fish screens to prevent the entry of these fish into turbines, as well as effective upstream and downstream passage facilities.

Where fish screens and fish passes or bypasses have been provided for salmonids, they may well benefit other species. But this would apply only to salmon and Sea trout rivers and not to the many other rivers that support migratory or mobile populations of other species. Such fish would include the Allis and Twaite shads and the three British Lamprey species (River, Sea and Brook), which are protected under Annexe II of the Habitats directive, as well as the European eel. Increasingly, scientists have come to recognise that many other non-salmonid fish and non-migratory game fish, while not undertaking full migrations between river and sea, do exhibit concerted seasonal migrations within their home river system for spawning or redistribution purposes. It can be concluded that virtually all types of river fish are forced to run the gauntlet of power plants, weirs, water abstractions, effluent discharges, bridges and other man-made obstructions if they are to complete their life cycle, and therefore also require appropriate protection.

The changing thinking on fish conservation has perplexed many hydro power operators, who are mostly highly responsible and would not wish to knowingly harm fish or other wildlife. At a time when British government policy is aiming to increase renewable energy production, however, more and more environmental barriers seem to be put in their way. It is the role of fishery scientists to ensure that environmental regulation can be based on sound scientific advice so that regulatory measures need not be unduly precautionary.

The need to improve upstream and downstream fish passage for a wide range of fish has spawned a wide array of technical solutions. The old-fashioned ‘positive exclusion’ (PE) fish screens may now be augmented or replaced by behavioural barriers using sound, light, electric fields or other stimuli; traditional fish ladders, which have been used since the 19th century are now joined by a wide variety of baffled channels and nature-like fish passes. Diversity offers flexibility to the designer but how do we ensure that we make the best choice?

The core of this question relies on two things: first, an accurate identification of the fish species and ecological functions that are to be protected; and, secondly, proper appreciation of the risk of the hydro power project to the fish. Knowing which fish require assistance will narrow down the suitable range of techniques, while an environmental risk assessment will determine the level of protection required. For example, where the risk to the fish from the scheme is deemed to be low, a low-cost behavioural diversion method might be acceptable, whereas for an endangered population or protected species of which the hydro project puts juvenile fish at risk, fine-meshed positive exclusion screens augmented by behavioural guidance methods might be more appropriate. In England and Wales, the Environment Agency (EA), together with English Nature and the Countryside Council for Wales, have recently compiled a ‘Best Practice Guide’ for fish screens (Turnpenny & O’Keeffe, 2005). This supercedes an earlier guide prepared on behalf of the Department of Trade and Industry aimed solely at the small hydro power sector (Turnpenny et al., 1998). This 150 page guide describes the legal background to fish screening, explains the conservation need and introduces the techniques commonly in use, as well as new ideas in development.

Mechanical PE screens remain the frontrunners in hydro power screening, both for inlet and tailrace screening. These can be in the form of traditional 12.5mm x 25mm mesh panel ‘smolt’ screens which require frequent manual cleaning or, for example, Coanda-effect spillway screens constructed of finely spaced wedge-wire. Use of PE screens is an intuitively effective solution and provided that a small enough opening size is selected and that approach velocities are kept low, there will be little trouble convincing regulatory agencies of their fitness for purpose. Where screens are placed in any sort of cul-de-sac, it is also necessary (and required by law in the UK) to provide a bypass or ‘bywash’ channel.

Behavioural barriers, and combinations of behavioural and PE methods, are rapidly advancing and gaining acceptance in the fish screening world. Electric barriers are not widely used for fish exclusion at intakes, owing to the risk of stunned fish being drawn into the flow. However, newer types, such as the Graduated Field Fish Barrier (GFFB), offer a safe and effective solution for tailrace screening. In this role, in the event of any fish becoming stunned it would be washed away from the danger. Electric tailrace screens are generally favoured on low-head, run-of-river schemes, where the loss of even a few centimetres of operating head can impact on revenues.

Acoustic fish deterrents (AFD) are also becoming more widely used in hydro power schemes, following successful scientific trials in other applications such as thermal power stations. The Bio-Acoustic Fish Fence (BAFF) is an acoustic fish guidance barrier which injects low-frequency sound into a bubble curtain, where sound levels reach 170dB re 1µPa. Fish reaching the ‘wall of sound’ are guided along its face into a bypass or safe area. Trials at hydro power schemes have shown that diversion efficiencies of up to around 90% can be achieved for a wide range of fish species and sizes. The benefit of this type of barrier is that there is no significant structure impeding the flow or affecting navigation. Currently the BAFF is showing promise as a means of preventing the spread of non-indigenous fish through North America’s canal systems (Pegg & Taylor, 2005).

A knowledge of fish swimming speeds is essential when designing screening systems that avoid fish entrapment. Scientists at the Jacobs Babtie Aquatic laboratories in Southampton, UK, have measured the burst (sprint) and sustained swimming abilities of nearly 20,000 individual freshwater fishes, at a range of water temperatures (Clough & Turnpenny, 2000; Clough et al., 2003). This has allowed the EA to move away from ‘standards’ based on fixed allowable approach velocities. The screening installation can now be designed to match the swimming performance of the fish sizes that are found in the particular river system. The importance of good scientific data is shown in the case of salmonids smolts, for which, prior to the Best Practice Guide, were subject to an advisory limit of 0.3ms-1. Based on new scientific data, it is now allowable to more than double this value where other conditions are met. The effect of this would be to reduce the required screening area by up to around 50%, generating considerable capital and maintenance cost savings for the operator.

One thing that the Best Practice Guide has revealed is that, despite all the new developments in fish screening, there still remains a gulf between the need and the solutions. While it has proved viable to exclude larger fish from turbines using mechanical screens, preventing the entry of small-bodied fish, for example Cyprinid Fry or recently metamorphosed Juvenile Lampreys (‘transformers’) can be another matter. Often at this stage, fish are less receptive to behavioural barrier methods. Technically, it would just require finer PE screens to be used, and at high head sites the head loss across the screens may not be an issue. At low head, run-of-river sites, costs become prohibitive, there being a trade-off between increasing screen area to reduce head-loss (thereby incurring high capital costs) and reducing the available head for generation (thereby reducing revenues).

Before looking for solutions, however, we should be sure that there is a problem. It is well established that the risk of injury due to blade strike during passage through turbines is a function of the ratio of fish body-mass to surface area: small fish have a high surface area to body mass and tend to be pulled around the blade by the flow thereby avoiding injurious impact (Turnpenny, 1998). Turbine passage studies have concentrated mainly on larger fish and more work needs to be done to establish the risk to smaller fish. Factors such as rapid pressure change and hydraulic shear stress may also play a part.

There is currently interest in developing fish friendly turbines. Their success is usually limited by the probabilistic relationship between the rate of blade sweep and the size of the fish passing through. It may be more fruitful to concentrate on ensuring that small fish, which have a lower risk of blade strike, can pass through without experiencing other stresses such as rapid pressure flux, shear stress or cavitation. These are probably realistic objectives for turbine designers and could avoid the need for a rush to fine PE screening.

The authors are Dr Andrew Turnpenny, University of Southampton, Department of Civil Engineering and Environmental Sciences and