… and the general public is starting to like it too. Chris Webb traces out the rehabilitation of nuclear power in a world that fears it, but is being taught to fear the demon carbon even more. 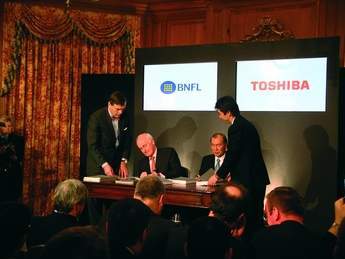 America is addicted to oil, it’s official. The most powerful man in the world and its foremost Big Oil apologist, president George Bush, says so. But a raft of pledges hammered out in his 2006 State of the Union address are set to redraw the US energy map and restore America’s civil nuclear pre-eminence. Perhaps.

Confirming that nuclear power is firmly back on the agenda, along with “zero-emission coal-fired plants, revolutionary solar and wind technology” the president singled out energy as a major issue facing his administration and set out his vision for the future; a future that could see his country generating 50 % of its electricity from nuclear power plants by 2025.

Bush’s words were, by all accounts, greeted with rapturous applause and echoed, no doubt, in the many boardrooms of US power utilities that have already staked a claim for piece of the action. Buoyed by government support for a new generation of nuclear plants with proposed tax breaks, federal loans of up to 80% of the estimated $1.5 billion to build new plants, subsidies in the form of $500 million standby provisions against construction delays and streamlined licensing procedures, several power companies have indicated their desire to bring about the Bush dream. They include Dominion, Duke, Entergy, Exelon, NuStart, Progress Energy, South Carolina E&G, Southern Co. and UniStar.

The best way to break the oil addiction, Bush said, is through technology. Since 2001, he said, the US had spent nearly $10 billion in developing cleaner, cheaper, more reliable alternative energy sources and was on the threshold of “incredible advances”. Raising the stakes, Bush announced his Advanced Energy Initiative, a 22 % boost to clean energy research at the Department of Energy, aimed at developments in areas such as hydrogen and ethanol-powered vehicles. The goal: to replace more than 75 % of America’s oil imports from the Middle East by 2025.

An initially quiet rehabilitation of the nuclear industry has been under way for some time in the US, starting last year with the Senate’s showing its willingness to consider an energy bill that included a relatively generous package of financial incentives for the construction of new nuclear plants. The current climate for the technology represents a remarkable turnaround for nuclear power. No new plant had been licensed in the USA since 1978, the year before the Three Mile Island accident in Pennsylvania. But spiralling oil and natural gas prices, concerns that fossil fuel emissions are – some would say irreparably – damaging the climate, and an increasing desire to make the nation less dependent on energy supplies from unstable political regimes have turned the table. Even public opinion appears to be on the mend.

High natural gas prices are taking their toll elsewhere, too. In Britain, where an Energy Review is under way and likely to recommend a similar return to nuclear technology to that in the US, even coal is enjoying a comeback in the interim. Drax, the UK’s biggest coal-fired power station, is co-firing coal with elephant grass, E.On is looking at building a new state-of-the-art coal-fired plant on the east coast of England, the first for three decades, and Alstom is planning a big switch from natural gas to coal, with a possible 40 % of its orders for new plant going for coal at the expense of natural gas.

With a pro-nuclear cabinet and senior MPs firmly in place, cynics of prime minister Tony Blair’s Review believe the outcome is a foregone decision, swayed by a powerful pro-nuclear lobby set on marshalling political, economic and environmental arguments to convince the Labour leader that the technology is the way ahead. Talk is already that between 8-10 new nuclear plants should be built as a matter of some urgency, to replace those that are being phased out of service at the end of their useful lives, and reduced dependency on imports. Moreover ministers are, particularly since the Gazprom-Ukraine fiasco and like their counterparts in the US, wary of the dangers presented by insecurity of supplies. As Alan Johnson, the secretary of state for trade and industry put it: “how comfortable will we be relying on imports for 80 % of our supplies [through natural gas] and what would be the impact of such a policy on the UK’s ability to reduce carbon emissions?”

In Britain, as in other signatories to the Kyoto climate change agenda, the case for nuclear power occupies a virtual space where economic orthodoxy clashes head on with environmental sustainability. Volatile prices and uncertain levels of demand do not sit well with nuclear technology, essentially a baseload provider, a fact that was to be the undoing of British Energy. But after three decades of procrastination on the energy issue, a raft of misguided investments (the so-called ‘dash for gas’), draconian price rises, and failed attempts to promote conservation, the UK looks set to follow the US lead. And it is much to the delight of many formerly anti-civil nuclear voices, among them the Confederation of British Industry (CBI). Its chief executive, Digby Jones, laments on earlier policies – or a lack of them – that have stifled industry: “fingers crossed is not the ideal policy.”

It is unlikely that nuclear power will deliver the panacea for Britain’s energy woes, but the chief scientist and advisor to Blair, David King, believes another generation of power plants is necessary to fill the void left by ageing and soon to be decommissioned gas-fired reactors – essentially to ‘buy time’ while a long-term solution is found to climate change in the form of non-nuclear, carbon-free technologies. And the giant, intractable nuclear industry is in the process of being dismantled, in parts sold off (see p. 3 February issue) and toned up for the challenge that may lie ahead. A buyer has beennamed for BNG America, fomerly BNFL Inc, while the UK part of the British Nuclear Group and Nexia are expected to be next in line for disposal to the highest bidder, the nuclear decommissioning legacy being left in the hands of the Nuclear Decommissioning Authority.

The $5.4 billion sum achieved for the Westinghouse sale – three times what the UK government had originally expected – sends a clear message worldwide. Under the Toshiba captaincy, Westinghouse is considered a strong contender to build new reactors in China, which is widely perceived as possibly the biggest single new market for the technology, and elsewhere. Highly reliant on coal – to the tune of some 80 % – China is keen to navigate the nuclear highway. It has ambitions to build a small commercial power plant based on the Pebble Bed design, and has shown interest in the Westinghouse AP1000, which has been approved for service by US safety regulators.

France makes no secret of its continuing nuclear ambitions. EdF has already said it would look at possible sites in nuclear-friendly states, including the UK. Even in Germany where, in the late 1990s the anti-nuclear sentiment was so strong that the ruling socialist-green alliance banned the building of new plants, there is a palpable swing of mood. And the voice from Brussels is no longer resignedly accommodating at the mention of nuclear power, but proactive to the point of animated.