ENEL builds on its Russian assets 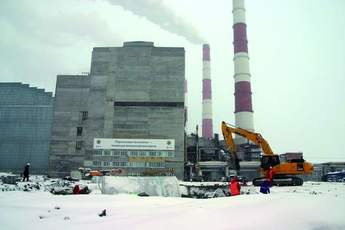 One of the first Western European utilities to take up the opportunities afforded by the radical restructuring of Russia’s power industry was ENEL of Italy, which has a controlling 55.78% stake in OGK-5 (other shareholders including the Federal Agency for Federal Asset Management (26.43%) and EBRD (6.06%) along with other minority shareholders).

OGK-5 has an installed capacity of 8.7 GWe (plus 2242 GCal/h of heat, with responsibility for supplying half of Ekaterinburg’s heat market) and annual revenues of around $1.3 billion. Generating assets include Russia’s biggest coal fired plant, the 3800 MWe Reftinskaya GRES, which is located in the Urals region, and three large gas fired power plants, the 1182 MWe Sredneuralskaya GRES (also in the Urals), the 1290 MWe Nevinnomysskaya GRES (southern Russia) and the 2400 MWe Konakovskaya GRES (Moscow region). The coal fired plant accounted for 49% of OGK-5’s electricity production in 2008, which saw the average availability factor for the OGK-5 fleet rise to 77.8% (from 69.6% in 2007) and the average load factor increase to 56.8% (from 51.% in 2007). But there is clearly still considerable room for performance improvement, modernisation, reduced environmental impact and increased efficiencies.

Accordingly, last year OGK-5 started construction work on two new 410 MWe combined cycle plants, one at the Nevinnomysskaya site (unit 14 there) and one at the Sredneuralskaya site (unit 12 there), which will allow older, less efficient, units to be shutdown once they enter commercial operation, which is scheduled to happen in 2010.

An EPC contract for the 400 million euro Nevinnomysskaya CCGT was awarded in July last year to a consortium of ENEL Produzione and, interestingly, nuclear plant builder, Atomstroyexport, with inputs from Teploelectroproekt of Moscow.

The Nevinnomysskaya CCGT will employ a Siemens-design SGT5-4000F (formerly V94.3A) 280 MWe gas turbine and Siemens design steam turbine and generators, to be supplied by longstanding Siemens-partner Power Machines, which has been named as main equipment supplier and in which Siemens has a 25% shareholding. This seems likely to be one of the first SGT5-4000F machines to be supplied by Power Machines, under a licence agreement signed last year which gives the Russians access to this technology (in addition to smaller turbines covered under previous agreements).

The vertical 3-pressure-level HRSG for the new Nevinnomysskaya CCGT is being supplied by CMI, with CMI’s Chinese licensee Wuxi manufacturing modules. The HRSG will be housed in a building.

The new CCGT unit will result in a net increase in installed capacity at Nevinnomysskaya GRES of 80 MWe after closure of two old units with a combined capacity of 330 MWe.

A 120 million euro 12 year loan agreement for the new plant was signed with EBRD in February 2009 “against the background of the current difficult business environment.”

Meanwhile, near Ekaterinburg, work is continuing on the new 350 million euro 410 MWe combined cycle plant at the Sredneuralskaya GRES, which entered the construction phase in September 2008.

Here the EPC contractor is Iberdrola Ingenieria y Construccion, while the gas turbine technology is GE 9FB (likely to be among the first such machines in the country), the steam turbine Skoda and the HRSG Nooter/Eriksen.

Turning to coal, another major current project for OGK-5 (with a capex of about 175 million euro) is the installation of dry fly ash handling systems at Reftinskaya GRES. The contract to deliver fly ash handling equipment for all ten of the bituminous coal fired units at the site was awarded in October 2008 to Clyde Bergemann Materials Handling, UK.

The main EPC contractor for the project is ROS Postavka, in consortium with Worley Parsons.

The aim of the project, as Clyde Bergemann describes it, is to “reconstruct the existing hydraulic ash handling system and create a new landmark pneumatic dry ash handling system.” The Clyde Bergemann scope includes delivery and commissioning of fly ash handling technology as well as PLC control systems and a centralised compressed air plant, with staged deliveries throughout 2009. The new system, which will initially work in conjunction with the existing hydraulic technology, will eliminate water usage and will provide OGK-5 with a saleable byproduct in the rapidly developing commercial market for fly ash in Russia.

The initial part of the project was awarded to Clyde Bergemann in December 2006, for the electrostatic precipitator fly ash handling equipment on unit 6, which is currently operational and working “in excess of all expectations”, says Clyde Bergemann. Once fully operational, the company believes, “the Reftinskaya GRES dry ash handling project is set to pave the way for future projects of this kind in the Russian power market”, bringing considerable environmental benefits in the vicinity of the plants, reduced water useage and higher plant availability.