A Lemmerer and J Razesberger explain why the reservoir at Ranna power plant in Austria needed to be emptied, and describe the methods used and difficulties encountered during this challenging task 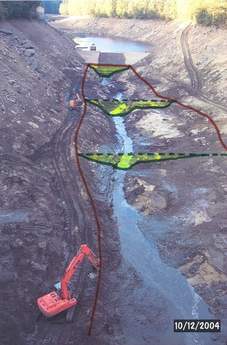 Energie AG Oberösterreich’s Ranna power station was built in 1925 in north-western Austria. The basic components of this pumped storage power station include a dam in the Ranna valley, a 4km long power conduit, and the power plant near the Danube. The plant, which was expanded in 1950, has a capacity of 19MW at a head of 212m.

In 1976 and 1981 it became necessary for the project reservoir to be drained for inspection purposes. Recently a further detailed inspection and overhaul was required, meaning the reservoir needed to be drained again. The project’s owners decided to carry out this work from August to the end of November 2004, a period when low flow conditions and low flood risk was expected.

As part of the work, carried out under the supervision of the Federal Ministry of Agriculture and Forestry, a detailed inspection was required on the dam and the steel components of the hydro facility. An extensive dam measuring programme during lowering and impounding, and the withdrawal of concrete samples for quality testing, were also necessary actions, together with the repair to damages on the side of the dam which occurred during a flood in 2002. The bottom outlet inspection butterfly valve also had to be renewed, following an extensive investigation of the shut-off valves.

Inspection of the bottom outlet

The bottom outlet of the Ranna dam is arranged in the medium block of the barrier construction. A trashrake cage is situated on the upstream face. The connection to the air-side face is located on top of a steel pipe, with a diameter of 1400mm. A needle valve DN 1400 with electro drive and an inspection butterfly valve with hand drive, which both act as operating shut-off valves, are located at the bottom outlet valve chamber. It was necessary for an engineering expert to carry out an extensive examination of the stability and operational reliability of the sealing of the bottom outlet.

Even though the components originated in 1950, no workshop drawings, material and inspection certificates or proof of stability were available despite intensive efforts.

In coordination with the commissioned expert, Dr. Schedelberger, the inspection scope was defined as follows:

•Repetition of the pressure test.

•Evaluation of the vibration behaviour by facility measures.

•Listing of the general state of preservation.

The resulting report came to the conclusion that the state of preservation of the shut-off valves is satisfactory, that the components are sufficiently dimensioned and that the needle valve can be further used as an operating shut-off valve. The change of the butterfly valve at the end of the inspection was therefore necessary, because the existing valve was not suitable for emergency closures.

The fish capacity of the reservoir of approximately 15 tons posed a challenge to the project. It was necessary to save as many fish as possible before the emptying to minimise the fish mortality rate.

The reservoir silting at the extent of approximately 100,000m3 led the engineers to expect a high, unavoidable sedimentary discharge. Negative effects on the downstream Rannatal nature conservancy and nature reserve were feared.

Due to the massive silting in the area at the intake of the bottom outlet, together with the unknown condition of equipment parts, technical problems during the impoundment were expected.

The Ranna reservoir represents a popular recreation area for inhabitants of the region. Therefore it was necessary to inform the abutter and recreational users of the work and include them in project operations.

When emptying the reservoir and carrying out the different servicing activities, the operability of the Steinpackwehr, which is situated 300m above the dam, was of utmost importance. To get the dam area dry, the water-supply of the Ranna at the Steinpackwehr had to be dammed up and discharged over the turbines of the power station to the Danube.

Fishery – The Ranna reservoir represents attractive fish waters. Altogether, 21 tons of fish had to be secured out of the reservoir. Using test fishing, methods were optimised at the beginning of the operation. Both trawling and electrical fishing came into operation. At first, the caught fish were put into a retaining corral with fresh water supply to calm them down. They were then retrieved with a crane and resettled into an alternative reservoir.

The species spectrum found in the lake was very multifarious. Altogether, 21 fish species were counted. Most frequently the bream, the non-native silver carp, as well as catfish, walleye and carp were represented.

Re-stocking was carried out under fish biological angles in the year after the impoundment. Special attention was applied to the implantation of native and ecologically valuable species. Non-native fish species (silver carp) were not stocked.

Treatment of the sediment – Over 100,000m3 of sediments were deposited in the Ranna reservoir before the emptying. This was composed of natural elements of the Bohemian earth, interspersed with organic, partially un-rotten material.

A selective clearance was not the objective of the existing project, but it was clear that it would come to a sedimentary mobilisation during the lowering and, as a result, a canyon-formed erosion would be created in the range of the old channel. With regard to the impacts on Rannatal nature reserve, this was discussed at every project meeting. To reduce the extent of the sediment amounts, selective sedimentary relocation was implemented and the sediments from the close-up range of the old channel were relocated to the dam edge.

Altogether, 30,000m3 of sediments were discharged to the subjacent water system during emptying.

Maintenance work – Following work on the bottom outlet valve, extensive maintenance work was carried out on the steel units normally located underwater. Corrosion protection was renewed on nearly all these components. In the area of the power intake, repair work in the area of the intake valve was accomplished to improve the tightness.

Although the last emptying had been 23 years ago, the steel units did not require immediate action. However, engineers took the opportunity while the reservoir was lowered to carry out maintenance, particularly on the area of the dam damaged by the flood in 2002.

Ecology – Although a large-volume sedimentary discharge was not intended, sedimentary discharge of 30,000m2 was achieved by the erosion of the abyssal channel and by measurements to uncover the bottom outlet. Such a bed load drive brings out a strain for the aquatic faunal community. To keep the stress to the biocoenosises to a minimum, and to avoid causing irreversible damages, a measurement programme was compiled.

•The brook bed down river of the dam was fished completely dry, with the fish placed into interim storage in suitable waters.

•A tributary, which flows into the pond, was channelled underneath the dam to achieve a thinning effect on the sedimentary discharge.

•Upon completion of the impoundment, an intense flushing with pure water was intended.

For the conservation of evidence, an extensive ecological monitoring in the out channel route was implemented before, during and after the impoundment, and the zoobenthos and the phytobenthos were examined. During the entire emptying, a permanent suspended substance measurement was arranged. The limit, according to the specification of experts, rest with the dimension of 10 grams per litre (80% of the time) and 20 grams per litre in the remaining time.

During the emptying, silting of the Ranna channel occurred which led to a negative appearance. By flushing with pure water, the channel washed clear again very quickly. The continuance of sand banks on the edge was considered a positive effect as they could act as a substratum for benthos colonisation and riverine vegetation.

A monitoring programme carried out a year after the reservoir was impounded demonstrated that no lasting damage was caused to the ecosystem, despite the discharge of 30,000m2 of sediments.

The emptying of the Ranna reservoir took place in a very sensitive environment. Not only is the Ranna reservoir ranked among the favoured recreation areas (fishery, fitness route etc) by the local population, the Ranna valley, situated above the reservoir, is also a nature reserve.

It was therefore important for the project team to inform all affected people, NGOs, the concerned authorities and the media very early about the essential measures and explain the expected impact as realistically as possible. This was achieved through the organisation of regular meetings and the production of a purpose-built information brochure sent to all households in the involved community.

As a result of the many different requirements, the drawdown of the Ranna reservoir posed an interesting challenge. Despite this, impoundment was successfully achieved in November 2004. The main points of the work are summarised below:

•Active PR with the early dissemination of information helped towards the effective project operation.

•As a result of the maintenance measures performed, the reliability of the Ranna dam including its facilities is secured for many years.

•Despite massive sedimentary discharge to the out channel route, no lasting damage of the ecosystem was incurred.

•Resources for the relocation of sediments in the reservoir have been exhausted. In any future work a concept to clear sediment needs to be developed.