By early June the 402 MW Dudgeon offshore wind project, which is located 32 km north of Cromer in Norfolk, UK, had reached what its owners called the halfway point in its construction, and was on schedule. Almost half of the foundations have been installed, the export cables were laid on 17 May, which is Norway’s Constitution Day, and the substation jacket built by SLP in Lowestoft was installed by the vessel Stanislav Yudin. The topside substation, also by SLP, will be ready for installation in August. The joint venture company Dudgeon Offshore Wind, which is owned by Statoil, Statkraft and Masdar, awarded contracts to Siemens for the engineering, supply, assembly and commissioning of 67 of its D6 direct-drive WTGs of the type SWT-6.0-154 rated at 6 MW and fitted with a 154 m rotor, as well as one 1000-ton offshore substation. Turbine delivery and installation will start in early 2017. Siemens has a service contract covering O&M through the first five years after commissioning. 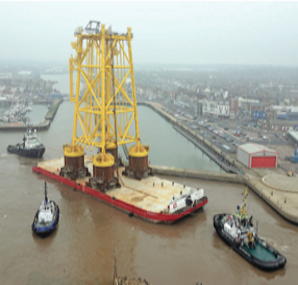 "We have had good progress. They are installing an average of three foundations per week, but in this area we are of course at the mercy of the weather," says Svein Aage Gurrik, who is in charge of the Dudgeon project's marine operations.

A2SEA's Sea Challenger is installing the wind farm. At first, the vessel will act as accommodation for the project, from September until turbine installation starts. The load out port will be Hull.