Panda Power Funds’ 1124 MWe Hummel combined cycle plant, currently under construction in the USA by a consortium of Siemens and Bechtel, has the distinction of being the first application of NEM’s DrumPlusTM technology in a triple-pressure-with-reheat HRSG. 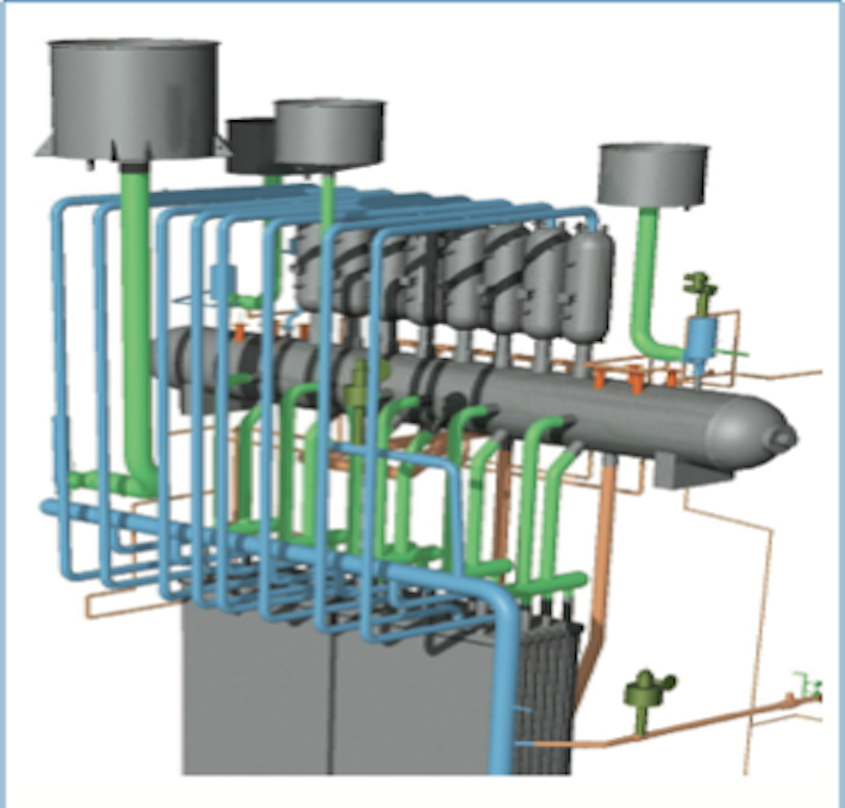 The new station, employing three Siemens SGT6-5000F gas turbines, each equipped with a heat recovery steam generator, plus a single Siemens SST6-5000 steam turbine, is expected to enter commercial operation in the first quarter of 2018, with erection of the HRSGs scheduled to start in May 2016.

As described in previous articles in Modern Power Systems, the DrumPlus design combines the fast start characteristics of a once- through design (which has no HP steam drum), eg, Benson, with the benefits of the drum style HRSG design – which include simplicity, easier control, greater operator familiarity and better tolerance of water chemistry upsets.

The DrumPlus design originally developed by NEM (now owned by Siemens) has an HP drum, but to minimise its diameter and therefore reduce wall thickness – which is a limiting factor in terms of ramping performance – the water-steam separation is performed in two stages, with the second stage being done outside the drum. The first stage consists of a primary separator, while the second stage consists of a row of separator bottles external to the drum (see illustrations).

The first DrumPlus units to enter operation were those at NRG’s El Segundo plant in California (see Modern Power Systems, October and November 2013), inaugurated in September 2013. Essentially a peaking plant, this employs two NEM-supplied DrumPlus HRSGs, but with a single-pressure steam cycle rather than triple-pressure, as at Hummel. Hummel will be equipped with CO catalyst and SCR (as at El Segundo) and in addition will have duct burners (not installed at El Segundo).

El Segundo experience has shown that the DrumPlus concept works well. Performance has exceeded expectations. Gas turbine start up times of as little as 12 minutes have been achieved, while operation has been smooth, with no problems due to swell or difficulties arising from use of smaller tubes. Also, the steam sparging system installed to provide heat to support guaranteed daily cold starts has been found to be unnecessary.

Overall, an HRSG with DrumPlus (currently only available for a horizontal exhaust flow configuration) costs about the same as an HRSG with conventional drum, but provides considerably greater flexibility. As well as Hummel several further DrumPlus combined cycle projects are now in the pipeline.

At larger plant sizes the merits of the once-through Benson (a Siemens owned technology which NEM also offers) become more pronounced. The Benson is also suitable for more advanced (including supercritical) steam conditions.