Trials of wood co-firing with coal at the 4000 MWe Drax plant in Yorkshire, UK , are providing encouraging results and may help to restore the confidence of the farming community in once again getting involved with short rotation coppiced willow in the wake of the failure of the ARBRE gasification project. 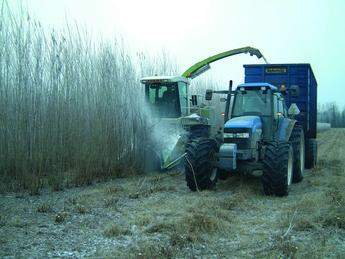 Following completion of phase one of the wood processing trial at Drax power station, the tests will now progress to phase two, it was announced in September.

Phase one has been successful in identifying the issues associated with the processing of wet wood, including transport and handling.

As part of phase one, over the last six months, wood-derived biomass fuel, in particular Short Rotation Coppice (SRC) willow, has been processed and supplied to the coal fired power plant.

Phase two will entail moving the grinder to the power plant itself in order to integrate it better with the plant’s long term biomass co-firing plans.

The grinder receives material as a wood chip and grinds it to produce a particle size of less than 5 mm, suitable for standard pulverised fuel boilers in UK coal-burning power stations. The wood grinding facility has a

In phase one the wood particles were fed into a coal mill via an existing conveyor, thence to the furnace.

In phase two the material will be directly injected into the furnace.

This is considered an important step as it bypasses the pulverising mills, which get clogged at biomass levels much over about 5% by weight.

on-line supply of wood-derived biomass. It is anticipated that an on-line supply will deliver both efficiency and economic benefits.

Long term, Drax is considering the potential for expanding its co-firing operations and is investigating the possibility of increasing biomass throughput up to 10% of total fuel input (by heat), with the great majority being directly injected rather than passing through the mills.

The potential for such an increase will clearly depend on a range of factors, not least being able to access large quantities of biomass at a suitable price.

Drax Power has already made much progress in establishing local supply partnerships for future forestry and energy crops. To date, the biomass trials at Drax power station have successfully demonstrated the potential to handle and co-fire significant quantities of biomass fuels, including roundwood as well as SRC willow.

The SRC willow used in the trial originates from 1100 hectares of willow grown locally by Renewable Energy Growers, a local producer group. This material was bought, processed and supplied by Renewable Fuels Ltd (which is part of the Lantmännen Group, a co-operative of over 52 000 Swedish farmers that also includes Agrobränsle, a world leader in SRC willow).

Renewables Fuels Ltd, based in Escrick, near York, offers growers complete services for the establishment of SRC willow as well as processing and supply logistics for the power generators.

The company says it has successfully established SRC in Yorkshire this year with a further planting programme for local growers in 2006. It believes these materials have the capability to provide a valuable contribution to renewable electricity generation, helping towards the UK government’s target of 10% of electricity supplies coming from renewable sources by 2010.

Around half of the energy crops have been harvested from the 1500 hectares of SRC that was originally planted for the ill-fated ARBRE willow gasification project at Eggborough, North Yorkshire.

“Short rotation coppice is seen as a major player”, according to Bob Smith of Renewable Fuels Ltd, “and we aim to develop the long-term establishment of energy crops throughout the UK. Drax has taken a first key step in proving to growers that there is a real and sustainable market for energy crops…”

Through the UK’s Renewables Obligation Order, co-firing SRC willow could make an important contribution to the UK government’s policy objectives regarding the reduction of CO2. In addition, SRC has a very low sulphur and metals content resulting in lower emissions overall.

Biomass, particularly in the form of dedicated energy crops, is much more expensive than coal, although operators such as Drax can earn Renewables Obligation Certificates (ROCs) in order to make co-firing economically viable.

(recently amended to extend the time for which co-firing is eligible) specifies a set of constraints for earning ROCs:

Co-firing ceases to be eligible for ROCs after this date, which may create problems in an area where lead times are everything. But all coal fired plants in the UK looking to long term operation are seriously considering biomass co-firing.

On current plans, Drax aims to significantly increase biomass inputs by 2009, as part of its extensive efforts on developing alternative fuels.

As well as SRC, the plant has made good progress in contracting for miscanthus in the Yorkshire area. Significant quantities have already been planted and it is anticipated that this will provide a large fraction of the total energy crop throughput at Drax in the near future.

Other, non energy crop fuels, such as olive residue and wood pellets have been co-fired.

Further biomass sources under considertion include forestry residues and possibly annual crops grown within 50 miles or so of the station.

The station is also employing talloil, derived from wood pulp, in place of heavy fuel oil for applications such as start-up support (during establishment and stabilisation of coal combustion) and back up during maintenance of coal pulverising equipment. The talloil, which is expected to result in carbon dioxide emissions savings of about 200 000 to 300 000 t/y, is delivered by barges via a restored jetty last used 20 years ago for heavy fuel oil delivery.

Another alternative fuel under consideration by Drax as part of its strategy of diversifying the fuel mix is petcoke.

In June 2004 following a lengthy consultation exercise, the Environment Agency granted permission to conduct an 18-month trial burning an 85% coal/15% petroleum coke blend on one of the six units.

Petcoke has been fired at Drax since June 2005, with excellent results.

Based on studies and the results of a three month trial in 1997, burning a mixture of coal and petroleum coke will actually produce a small overall environmental benefit for the

• overall emissions to water and land will be reduced;

• overall metal emissions to air will be

Detailed testing and monitoring programmes to measure emissions during the trial have been approved by the Environment Agency. These include an initial six-month

calibration air quality monitoring programme to establish the benchmark against which emissions during the trial will be compared.

The monitoring programmes are in addition to the comprehensive air quality monitoring already carried out by the station. The extra monitoring will include sampling and measurement of concentrations of nickel, vanadium and PAHs (polycyclic aromatic hydrocarbons) in dust. New sampling meters have been installed and commissioned.

A brief history of Drax

It is perhaps a mark of the extraordinary transformations that have befallen the UK power sector since privatisation that the 4000 MWe Drax coal fired power station, originally built, owned and operated by the Central Electricity Generating Board (CEGB), is now a fully merchant plant held by financial institutions through an entity (Drax Group Ltd) incorporated in the Cayman Islands.

The Drax Group owns Drax Power Ltd, which in turn is the owner of the power station and is the largest independent generating company in the UK.

Drax Group is currently undergoing a refinancing, with the aim of getting a listing on the London stock exchange by the end of this year. On 12 September

At current output levels the station’s six 660 MWe units supply around 7% of the UK’s electricity needs.

Nevertheless it is the newest coal-fired power station in the UK, and despite its subcritical steam conditions can still claim to be the most efficient.

Immediately after privatisation, in 1990, Drax came under the ownership of National Power, one of the newly formed generating companies.

With the emergence of vertically integrated companies, combining generation, distribution and supply, it became necessary for generation assets to be divested, and so in 1999 Drax power station was acquired by AES Corporation of the USA for £1.87 billion.

Increased competition, over-capacity and new trading arrangements contributed to a significant drop in wholesale electricity prices, which hit an all time low in 2002. Many companies experienced financial problems, and Drax power station’s major customer, TXU Europe, went into administration triggering financial difficulties for Drax. Following a series of standstill agreements with its creditors, the AES Corporation and Drax parted company in August 2003. Just months later in December 2003, creditors overwhelmingly supported a financial restructuring scheme that put Drax into the ownership of a number of financial institutions.

Drax describes itself as the cleanest coal plant in the UK, being the first to retrofit flue gas desulphurisation (FGD) equipment, over the period 1988. It also has a major programme underway to reduce NOx emissions, with the EU’s Large Combustion Plant Directive becoming effective from 1 January 2008.

As part of this a contract has been signed with Mitsui Babcock for a boosted over-fire air (BOFA) system to be fitted on unit 1. For Drax, the emissions limit for NOx will reduce from its current level of 650mg/Nm3 to 500mg/Nm3 from 2008, and to 200mg/Nm3 from 2016. The BOFA system guarantees a NOx emissions level of 450mg/Nm3.

As discussed in the main article, Drax has also been actively seeking alternative fuels, notably biomass and petcoke, a main aim being to provide increased protection from possible future market fluctuations, be it another collapse in power price or increasing fuel costs.