By 2011, the Drax coal-fired power plant in the UK plans to cut its annual CO2 emissions by 15%. This will be achieved by improving efficiency and co-firing biomass materials (with the world’s largest co-firing facility currently under construction at the site and biomass expected to account for 12.5% of the huge facility’s output by the middle of this year (to be covered in next month’s issue)). Key to the increase in efficiency is the major project to upgrade its six turbines. 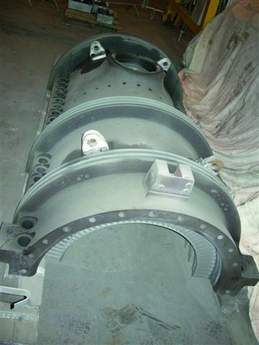 The Drax turbine upgrade project involves replacing the high pressure and low pressure turbine modules of all six 660 MW generating units with modern steam turbines, to improve thermal efficiency and therefore reduce emissions of carbon dioxide. After the turbine upgrade the power plant, which employs subcritical steam conditions, will have an efficiency of around 40%, compared with 38% before the backfit.

The upgrade will see the replacement of the HP turbine spindles and static and rotating blading and inner cylinder and the three LP turbine spindles and static and rotating blades of each unit as well as various minor upgrades to enable the new plant to integrate successfully with the existing equipment. Very significant efficiency improvements will be obtained by upgrading the HP and LP turbines, but the IP turbine will be kept because the existing IP turbines are of relatively high efficiency.

Design of the new turbines

Siemens is supplying and fitting the retrofitted turbines. Siemens offered a fast track HP turbine assembly that allowed improvements in the HP blades to be completed ahead of improvements to the LP turbines on the first of the six units. In the retrofits of the subsequent units the HP and three LP cylinders have been replanted during one outage. This earlier installation of the new HP blade path allowed substantial environmental and commercial payback.

The design of the new components consists of an HP inner module (inner cylinder and rotor) and three LP rotors with separate blade rings and carriers. The original triple-casing HP turbine design consisted of an outer casing which housed a sleeved inner casing and rotor. The new HP turbine design is of a more conventional twin casing and rotor type with sixteen stages of reaction blading. Each individual blade is machined from a solid piece of high chromium alloy steel, with the root and shroud integral to the blade form. One HP module contains 1162 rotating and 1382 static turbine blades.

The new LP turbines have an additional stage on both flows of all three cylinders, which has required some minor exhaust section modifications, due to the increased length. Smaller reaction blades for the LP upgrade are machined from solid, while the larger low reaction last stage blades are manufactured as a 36in long forging. Each LP spindle is fitted with 1852 blades, and the static blade carriers hold 1684 fixed blades.

In total over 85 000 individual blades are being produced for the retrofit project.

To accommodate the increase from six to seven stages of LP blades, the original diaphragm assemblies have been changed to a blade carrier design. These blade carriers locate on some of the original diaphragm registers. This design and installation methodology reduces the amount of machining that has to be done on the existing casings to a bare minimum. Consequently the risk of distorting a currently dimensionally stable casing is reduced exponentially. Both halves of the blade carriers bolt at the half joint level, eliminating the safety hazard associated with retained top half diaphragms when lifting top half cylinders during maintenance activities.

The production of all the components is controlled from the Siemens manufacturing base in Germany but sourced from worldwide suppliers as far ranging as Japan, Hungary and Italy. Drax developed a joint agreement with Siemens to ensure that quality control, inspection and hold points were met, to ensure that the challenging manufacturing schedule was maintained.

This schedule is allowing Drax to accommodate the retrofit activities within normal statutory, planned outage dates. The HP turbine on one of the Drax turbine generators (TG3) was completed in 2007, with two full turbine upgrades (HP and LPs) completed in 2008 (TG5 & TG1). 2009 saw the third successful full retrofit installation, and delivery of a full set of spare LP spindles and an HP module. The project is on schedule to be completed in 2011.

Drax also took the opportunity to standardise its turbine inspection strategy and opted to open up and refurbish the IP turbines, steam chests and generators. The IP turbine rotor forgings are also being life extended to enable the rotating plant of the turbine generators to have a 12 year maintenance inspection period, and thus extend the life of the whole turbine train for ongoing production at Drax.

Other works undertaken in association with the spindle replants include replacement of the main thrust bearing, upgrading the LP journal bearings and an upgrade to the shaft earthing system. Bearings were upgraded to withstand the higher specific loading encountered with the increased mass of the new LP spindles. The upgraded LP spindles necessitated a modification to the existing journal bearing shells to a higher grade of white metal lining. The thrust bearing has been upgraded to a more modern design, with tilting pad and pressurised lubrication. The shaft earthing system dissipates static electricity induced by the action of steam flowing over the turbine blades.

The increased weight of the LP rotors required upgrades to the barring gear (slow speed maintenance) motor to increase the torque output, and to the jacking oil system to increase the output pressure to lubricate the journal bearings when turning at low speeds.

For Drax to accommodate the retrofit, standardisation and IP rotor life extension programs, a joint team was developed with Drax using its existing maintenance support, RWE Technology Services and also with Siemens. The preparatory works for each outage were started approximately one year in advance and followed the Siemens TMS planning system. This included the manufacturing reviews in Germany and the site works and winter period preparation.

Les Lemmon, head of the engineering and mechanical section at Drax, said “the efficiency gains are largely down to the design of the turbine blade path. The existing turbines were designed and built about 40 years ago – before the existence of software tools such as CNC machining or finite element analysis for optimising the steam path and modelling where losses occur. Small, almost undetectable, changes to the blade shape will increase the efficiency of the plant’s high-pressure cylinder to 92% compared to 87-88% at present.”

Peter Emery, production director at Drax said: “The modernised turbines are so much more efficient that we will burn 500 000 tonnes less coal per year which is the equivalent of taking 275 000 cars off the roads.”

Following completion of the turbine upgrade, Drax expects to improve its overall base load efficiency – the ratio of energy out to energy in when operating at full capacity – by 5% and so reduce CO2 emissions by one million tonnes/year.

The old turbines made history when they were installed 43 years ago. At 660 MW the first of the six turbines to be installed (manufactured by Parsons in 1967) was the most powerful high speed turbine in the country.

The original turbines are considered part of the UK’s engineering heritage and in February 2010 Drax donated one of the displaced HP turbines and a row of LP last stage blades to the Discovery Museum in Newcastle as part of a project with Siemens, and Tyne and Wear Museums.