Down to earth software

By using the software developed at National Technical University of Athens (NTUA), engineers planning earth dams have been able to calculate alternatives of shape and size in order to create the most appropriate and environmentally friendly structure 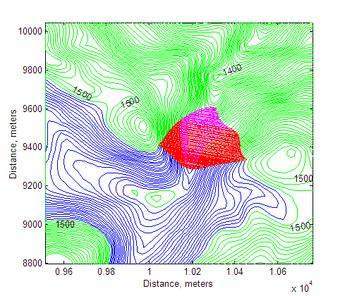 Earth dams are large civil engineering structures that affect the environment; not just the ecosystems and the processes of the natural environment but the aesthetics of the landscape as well.

Planning engineers, especially those that design earth dams, have to be aware of existing laws and regulations and be able to conduct the environmental studies, but they also need to have the tools to design the most environmentally acceptable version of the structure.

A portion of the research performed at the National Technical University of Athens (NTUA) School of Civil Engineering is presented here. The overall research refers to software written to evaluate alternatives of shapes and sizes, possible locations, and orientations of earth dams. In this article, alternatives of earth dams regarding the radius of curvature of the crest are presented. Along with the curved crest of the dam, all the upstream and downstream contour lines of the dam faces are considered curved at the same radius of curvature.

Under the legal issues of the Environmental Laws and Directives in each country, the present research refers to the shape and size of an earth dam that will best comply with the environmental concerns of the region. The usual outline of an earth dam is a straight crest, and slopes 2:1 upstream and 3:1 downstream. Due to environmental concerns and in order to make the earth dam an environmentally friendly shape, the crest should be curved upstream. Straight features are not present in the natural topography, and the existing topography of each river valley has its own characteristics. The curved contours on the upstream and downstream face of the dam will match better than straight lines to the topography of the location of the dam, and it is the duty of the planner to select the radius of curvature for the dam that matches best the topography.

Computer software (yet to be named), written at the School of Civil Engineering of the National Technical University of Athens by Panayiotis Foteinopoulos, automatically develops the outline of an earth dam when the topography of the river valley is given. The width and elevation of the crest of the dam, and the upstream and downstream slopes of it, need to be entered. The same software develops alternatives of the shape of the dam, with curved crest convex upstream and concave downstream.

The research presented here considers putting an earth dam on the valley of the Moose Head river, located at the Shasta National Forest in California, US. Although the design and construction of a dam in such a region is imperative, one can develop a good case of alternatives and a methodology that can be used in other cases of dam planning in different projects.

The dam is shown in more detail along with the contours of the ground surface at every 2m interval and the guideline along the riverbed in Figure 2. The outline of the dam has 2:1 upstream and 3:1 downstream slopes, and the intersection of the ground contours are shown along with the dam contours at every 2m contour interval. In this case the volume of the reservoir is 1.6221×107m3, and the volume of the dam is 1.6776×106m3.

The designs of earth dams with curved crests were considered with radius increasing from 500m to 1000m at each 100m interval, and for 2000, 10,000 and 100,000m. The volumes of the reservoir and the curved dam were calculated for each case, and the plan of the dam for the case of radius of curvature equal to 600m is shown in Figure 3. The point of intersection of the dam crest and the guideline along the riverbed remains the same as in the case of the dam with the straight crest.

The plan of the Moose Head dam for the case of radius of curvature equal to 1000m is shown in Figure 4. The point of intersection of the dam crest and the guideline along the riverbed remains the same as in the case of the dam with the straight crest shown in Figure 2. It is evident that as the radius of curvature increases, the volume of the dam decreases, and the volume of the reservoir decreases. However, calculations of the reservoir volume and the dam volume indicate the fact that the dam volumes decrease faster than the reservoir volumes.

Selection of radius of curvature

To select the appropriate curvature of the dam, with the goal to obtain the minimum volume of the dam with the maximum volume of the reservoir, a series of cases were examined and the results of reservoir volumes and dam volumes were tabulated in Table 1, along with the percentage of volume change as the radius of curvature changes from higher to lower values.

The results from the computer software shown in Table 1 are plotted in the graph of Figure 5. A logarithmic scale is used for the ordinate axis, which indicates the radius of curvature in metres. The abscissa corresponds to the volumes in metres cubed of the reservoir and the dam, with a different multiplier in each case.

The smallest dam corresponds to the straight-line dam crest, while larger dams are produced for curved crests. As the radius of curvature decreases, the volume of the reservoir increases, although this increase is small. Since the size of the reservoir is of the order of 107m3, the increase of 100×103m3 (a less than 1% increase) in the case of a 500m radius of curvature is small. The less the radius of curvature, down a certain minimum dictated by the topography of the site, the more environmentally friendly the earth dam is, while the upstream and downstream slopes of the dam remain constant, facilitating surface drainage.

To obtain an environmentally accepted design of the earth dam according to the EU directives 01/42/EC [1] and 2000/60/EC [2], the dam should be a multipurpose project that contributes to mitigating the effects of floods and droughts, as well as enhancing the protection and improvement of the aquatic environment. According to the latter directive, the planning engineer aims at a larger reservoir associated with a smaller volume of dam that will not disrupt the aesthetics of the natural landscape. According to the Law in Hellas, Greece, (Environmental Law 1650/1986 [3]), the Ministerial Decree 69269/5387/90 [4] considers the balanced development of the country and requires the evaluation of the direct and indirect effects of each project.

The planning engineer of an earth dam has to consider the requirements of the laws and regulations and produce environmentally friendly designs of the dam. The main design considerations, outside the safety and economy of the construction and operation of the dam, will be the environmental concerns regarding:

• Curved versus straight line crest of the dam.

From the research performed in this article, the planning engineer should be able to produce a table indicating the volumes of the reservoir and the dam for different radius measurements of curvature of the crest of the dam, and decide on the curvature of the dam that is more aesthetically pleasing and the volume that is acceptable regarding the economics of the construction of the structure. In the example shown in this research, the proposed dam might be between cases 7 and 8 (Table 1), with a 6% increase of the volume from the case of a straight-line crest of the dam. In this case the radius of curvature will be 650m and the dam will look in plan approximately like the dam in Figure 3. The contours at equal elevations on the upstream and the downstream slopes of the dam will also be curved at the same radius of curvature, with the goal to display a smooth surface for surface drainage of storm water.

Application of the software developed at NTUA can give solutions for locations of river valleys where dams can be placed, and alternative positions of the dam and different height options for it. When the axis of the dam is decided as in the present research, the planning engineer can work with alternative values of radius measurements of curvature of the dam and be able to select the radius that produces a suitable shape of the dam and an acceptable volume.

In cases of rockfill dams, the computer software has the possibility of considering slopes 1:1 for the upstream and downstream bodies of the dam. Even for other earth dams, such as dams with bodies of coarser or thinner materials that require different slopes, the computer software can consider the upstream and downstream slopes of the dam, and can develop the shape of the dam and calculate the volume of it from the foundation to the crest.

As mentioned earlier, EU Directive 2000/60/EC insists that for a dam design to be environmentally accepted it must be a multipurpose project that contribute to mitigating the effects of floods and droughts, and recognises the importance of its aquatic environment. As well as this, the dam must not disrupt the aesthetics of the natural landscape.

The results of this study show that the planning engineer is able to use the computer software to calculate alternative shapes and sizes of dams, calculate volumes of the dam and reservoir, and produce drawings in plan of the dams, in a way to facilitate the selection of the most appropriate and environmentally acceptable dam.

The authors are Efrossini Kalkani and Panayiotis Foteinopoulos are from the School of Civil Engineering at the National Technical University of Athens (NTUA), Patission 42, Athens 10682, Greece. Email: pfoti@tee.gr and kalkani@central.ntua.gr.