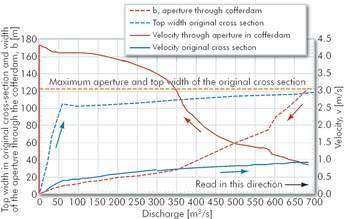 Special attention is needed when it comes to developing diversion works on rivers that typically exceed bankfull discharge during flood seasons. Inflows on these rivers can vary considerably, and site conditions can be hampered during floods. On top of this, design of the diversion system will be influenced by the following conditions: i) flow conditions during a hydraulic year; ii) statistically determined floods related to a period of occurrence at the dam site; iii) topographical conditions upstream and downstream of the dam; iv) tailwater rating curve at the dam site; vi) first river diversion – river closure; vii) definitive closure of the river; viii) type of dam and ix) construction sequence. The following article describes how these elements were taken into consideration during development of the river diversion systems for the Imboulou project in the Democratic Republic of Congo and the Bujagali scheme in Uganda, both of which are currently under construction.

Following 20 years of preliminary studies, construction work for the 120MW Imboulou hydro power plant on the Lefini River finally started in 2003. Located on the lower basin of the Lefini – shortly before it joins the Congo river – the Imboulou powerhouse will be equipped with 4x30MW Kaplan dual control turbines which will generate an annual power of 600GWh, taking advantage of a head of 18m. Main project components are a 32.5m high earthfill dam with a crest length of 581m, a spillway for a flood flow of 1200m3/sec and a 60km long access road.

The Bujagali hydro power plant on the White Nile River is located near Uganda’s second biggest city, Jinja, some 7km downstream of the Kiira (200MW) and Nalubaale (180MW) hydro plants. The project will comprise of a 255MW hydro power plant featuring 5 x 51MW Kaplan turbine generation units for a design discharge of 1375m3/sec, a 30m high rockfill-earthfill embankment dam with a crest length of 850m, and ancillary works for a design flood of 4500m3/sec, These include a gated spillway comprising two radial gates (2930m3/sec), one flap gate (388m3/sec) and an emergency siphon spillway (1200m3/sec). The dam will impound a reservoir with a surface area of 430ha and will provide a storage volume of 54Mm3 and a life storage of 12.8Mm3 for normal daily operation. The annual average energy has been estimated at around 1500GWh taking advantage of a head of 22m.

Both Imboulou and Bujagali are EPC type contracts with a total investment cost of US$300M and US$680M respectively.

The diversion of the Lefini river to allow construction of the Imboulou project to proceed was planned in two phases over one diversion stage: a) during the first phase, the gated spillway and a part of the power house is to be implemented on the right river bank, with normal flows released in the river; and b) during diversion stage, the river channel will be closed and the inflow released through the constructed approach channel and gated spillway area on the right river bank (see Figure 1).

The closure of White Nile River to allow for construction of the Bujagali project will be carried out in two stages. During first diversion stage, the left river channel will be closed with inflow released through the right river channel around an existing island for the Bujagali project (see Figures 2 and 3). This will facilitate the construction of the gated spillway and powerhouse.

During the second diversion stage, the inflow will be diverted through the left river channel where the gated spillway has been completed, allowing for construction of the embankment dam on the right river channel.

As part of the design stage, the hydraulic capacity of the river channels was analysed. A minimum river diversion capacity was evaluated taking into account that the rivers must be diverted for four years, meaning construction of the cofferdams is a short-term event. Based on available data for Imboulou, a design discharge for cofferdam construction of 683m3/sec was determined for a return period of 10 years.

In the case of Bujagali, a design discharge for cofferdam construction of 1000m3/sec was deemed to be reasonable, taking into account the available data and the ability to regulate the discharge from the upstream power stations, Kiira and Nalubaale. Gauging of discharges indicated that the flow coming from upstream divides around Dumbbell Island with approximately 53% passing along the left side of the island under the existing (natural) conditions. Thus, at the design discharge of 1000m3/sec, 530m3/sec would flow past the sites of the left channel cofferdams – first river diversion stage – under existing conditions and for a return period of 10 years.

For both projects, the cross sections of the valleys are relatively narrow. Figure 4 shows the cross section for the cofferdam site of Imboulou with a flow area of approximately 730m2, a mean flow velocity of 1m/sec and top width of 120m. In the case of Bujagali, the following hydraulic parameters were determined: a flow area of 272m2, a mean flow velocity of 1.5m/sec and a top width of 62m. The above data quickly lead to the conclusion that the arrangement of a river diversion by cofferdams was enough.

A determination of the crest elevation of the upstream cofferdam is carried out taking into account upstream water levels, water depth, flow velocity and flow discharge.

The main parameters to be taken into account in the rockfill dimensioning for implementation of the cofferdam are: i) geometry of the closure gap – width of the gap or breach; ii) river discharge; and iii) flow velocity.

Based upon the geometrical properties of the construction, the horizontal closure was distinguished in the process for cofferdam construction, where the closing material is dumped into the gap from the shores. The material was placed over the whole depth of the closure gap forming the so-called dam-heads. By building out these dam-heads closure is achieved. It is important to note that this method will increase the load on the dam-heads and the bottom protection (Figure 4). Eventually the loads become extremely high, but only in a small area. Because there is no possibility of spreading the load in a horizontal direction the attack on the bottom protection is high and, consequently, the erosion holes will be deep. Again this is only a small area.

Shape of the closure gap

Figure 4 shows the limits defined regarding the gap. Firstly, the original cross section with a top width of approximately 250m is narrowed by closing the right and left river banks, allowing flow to be routed through a gap approximately 100m wide. The next step is a consecutive closing beginning from the right river bank up to the shore of the left river bank, forming a wedge figure. As a final process of the closure, the wedge is closed.

Figure 5 shows the flow capacity, flow velocity and top width in the original river cross section and in the gap up to its final closure. The peak flow velocity is reached during final closure with a value of approximately 4.4m/sec.

Figure 6 shows the evaluation of the upstream water surface elevation for the bottom, and breach or gap width for a range between 0 and 120m wide during closure dam construction for a range of discharges between 0 and 720m3/sec.

Figure 7 presents the rockfill dimensions as a function of the flow velocity considering the original river channel cross section up to the final gap during closure cofferdam construction. Figure 4 also shows the dimension of the rockfill for each stage of the horizontal closure, beginning with an initial size of 0.25m on the river banks, proceeding with stone sizes of 0.45m, 0.65m and 0.85m. The rockfill dimension during the final closure is of approximately 1.05m diameter reaching a flow velocity of 4.40m/sec at the final stage, when flow discharge reaches zero value.

The main issue for both of the projects cofferdams concerned the availability of quarry materials and supply of stones with diameter of approximately 1.05m during the final closure. If the potential of quarries is estimated efficiently, no other material – such as concrete blocks, tetrapodos, etc – could be used.

Note: Figures 4, 5, 6 and 7 have been performed by the author and are only applicable for the river dimensions of Imboulou hydroelectric power plant