A skid-mounted membrane de-oxygenation system, the first of its type in the nuclear industry, helps reduce primary vessel corrosion at the UK’s Wylfa NPP 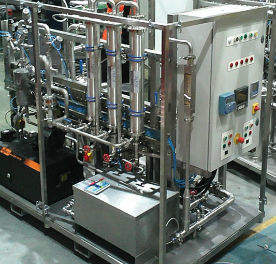 In 2012, a process of defuelling and fuel transfer commenced at Wylfa’s reactor 2. This carbon dioxide-cooled magnox reactor supplied heat to create steam in four high-pressure water-tube boilers (that is, steam generators). To defuel both reactors takes about five years and during this period it is necessary to keep the irradiated fuel cool. To do this, demineralised water is continuously circulated through what were the primary gas circuits from the reactor to the four boilers (two pairs) and returned to the reactor via a heat exchanger. Each system has about 160m3 of circulating water.

At the planning stage, the station chemists were concerned about the possibility of corrosion of the ageing pipework and pressure vessels. The initial fill of demineralised water would be saturated with oxygen at atmospheric pressure – 10mg/l – and this would certainly present a potential corrosion problem. The chemists wanted to reduce the dissolved oxygen concentration, ideally to less than 100 µg/l. Magnox Engineering considered a number of de-aeration options, and concluded that although chemical de-aeration would create environmental issues of its own, it would be the least expensive option. Traditional thermal de-aeration was clearly impractical in a cooling system, and there was insufficient space for a vacuum de-aerator. They took the problem to ELGA Process Water.

Although it did not have an off-the-shelf solution, ELGA parent company Veolia Water Solutions’ development engineers worked closely with magnox to provide a bespoke pilot plant based on membrane de-oxygenation. This was installed on two of the boiler circuits of Reactor 1 for a two-week trial during a planned reactor shutdown in 2011.

Following a design review, incorporating lessons learned during the trial, the pilot plant was modified to provide continuous oxygen removal and particle filtration. The modified skid and a new one, for the second boiler pair, were installed and commissioned during the Reactor 2 shutdown in February 2012 to ensure that they would be ready for the start of defuelling in April 2012. Each de-oxygenation system operates as a side-stream treatment on each circuit and polishes the full water volume of 160m3 over about ten days. The systems have performed consistently well, and two more skids are ready to be installed when Reactor 1 defuelling commences.

The final design is shown schematically in the figure. A 4.5m3/h side stream is drawn from the circulating cooling water and is initially filtered through two 50% duty 50µm bag filters to protect the pumps from any large particles such as corrosion products. A variable-speed booster pump pulls the water through two 50% duty 5µm bag filters for fine filtration to protect the downstream membranes from blockage. It is then fed to three stainless steel membrane de-oxygenation modules operating in series before being returned to the cooling circuit.

The degassing modules use LiquiCel hollow-fibre polypropylene membranes and are fed with nitrogen as a ‘sweep gas’, which travels along the inside of the hollow fibres with the water phase on the outside. Because the partial pressure of oxygen on the sweep gas side of the membrane is very low there is a concentration difference that causes oxygen to transfer across the membrane from the water phase into the gas phase. A vacuum pump draws the sweep gas from the modules and discharges it, together with the oxygen removed from the water, to the atmosphere. Each stage of de-oxygenation gives about 50% reduction of the influent dissolved oxygenation so initial removal from the saturation concentration of 10mg/l requires several cycles of treatment, and this takes several days. Once this initial de-oxygenation is complete the skid only has to deal with in-leakage of air and the dissolved oxygen in make-up water.

The skids are designed to nuclear engineering standards and all the pipework on the skids is Schedule 10 316 stainless steel. Quick-acting slam shut valves, provided on the feed and return to each cooling circuit, close on high pressure within the de-oxygenation skid or if the emergency stop on the local control panel is operated. Design, materials procurement and construction were all documented and traceable and acceptance testing was undertaken before commissioning. One of the main challenges for the designers was the limited access to the reactor annulus and restricted space for location and installation. This meant that the skids had to be designed to be as compact as possible whilst retaining operability.

Both the influent water and treated water on each skid are monitored for conductivity, pH and dissolved oxygen concentration. Sample water and water from the separator on the vacuum pump is collected in a 50 litre tank and pumped back to the cooling system so that there is no loss of water from the system during normal operation. Maintenance is minimal. The filter bags are replaced monthly, but with duty and standby filters, there is no interruption to treatment, and nitrogen is supplied from cylinders that are regularly replaced.

By significantly reducing corrosion in the cooling systems, the system has minimised leaks and contributed to better system integrity and lower maintenance costs.