The Asian Development Bank is assisting the South Pacific islands of Samoa to refurbish cyclone damaged small hydro plants as well as construct new facilities. The generation of additional hydropower capacity will help release the country from dependence on imported fossil fuels. 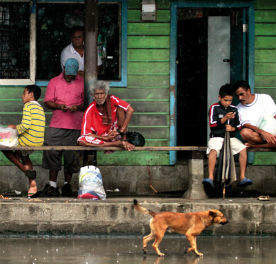 In 1959 the 1MW Alaoa hydropower station was the first small hydro scheme to swing into operation in Samoa in the South Pacific Ocean. It is one of five hydro plants across the country and, according to the Electric Power Corporation (EPC), these hydropower facilities supplied more than 85% of the country’s electricity in the mid 1990s. However this has now declined to just under 40% due to growing power demands brought about by increased standards of living and the provision of electricity to a wider population.

In 2011 the total installed power generation capacity mix of EPC was 42MW or 121.4GWh. This comprised 30MW of diesel generators, 11MW of run-of-river hydro, 1MW of biofuel and solar power.

As a result Samoa has become heavily dependent on imported oil for diesel powered electricity. With 60% of its energy derived from dieselgenerators, fuel imports cost about 10% of GDP each year and amounted to 95M litres of imported diesel in 2012. As oil is expensive and with prices expected to rise over the coming years, the country’s economy is highly vulnerable to such fluctuating prices. Diesel generated electricity is also costly for the final consumer.

Renewable energy resources for power generation in Samoa are described as being limited. However there are opportunities and hydropower is regarded as a renewable, less expensive option which can help reduce the country’s dependence on imported fossil fuels.

In November 2013, the Asian Development Bank announced that it will be providing funding for the Samoa Renewable Energy Development and Power Sector Rehabilitation project. The bank will be providing US$23.8M to rehabilitate three small hydropower plants on the island of Upolu. These plants (Samasoni 1.9MW, Fale ole fee 1.7MW and the 1MW Alaoa) were all damaged by Cyclone Evan in December 2012.

The project will also fund construction of three new plants (Faleseela 190kW, Tafitoala 460kW and Faleata 160kW) which will be sited on both the islands of Upolu and Savai’l. It is proposed that these will be developed in partnerships or joint ventures with local communities. Business studies are currently under discussion.

"Combined, the new and rehabilitated projects will generate 13,780MWh of electricity per year"

Combined, the new and rehabilitated projects will generate 13,780MWh of electricity per year. It is anticipated that they will also have an annual estimated diesel fuel saving equivalent of almost 3.5M litres. If schedules are implemented as planned all project work should be completed by the end of 2017.

“When a country taps into its own resources it becomes more independent," says Paul Hattle, energy specialist and project team leader for the Asian Development Bank. "Lowering Samoa’s reliance on fossil fuels will help free up government funds for other needs while improving national energy security and sustainability."

Existing hydro plants and need for rehabilitation in Samoa

Alaoa is currently only operating at one-third of its capacity. Heavy rainfalls during Cyclone Evan in December 2012 meant that falling trees and landslides led to extensive slope erosion. This has destroyed a considerable length of the existing eastern headrace channel and washed away the intake.

Fale Ole Fee was out of operation before the cyclone hit the island and is still out of operation. The western intake and diversion pipeline suffered considerable damage.

"Samasoni…was heavily damaged by Cyclone Evan and is out of operation."

Samasoni is located downstream of Fale ole Fee and Alaoa. The plant was heavily damaged by Cyclone Evan and is out of operation. The two intakes in front of the head pond are fully blocked by bed load and sediment, while the head pond is completely filled by fallen trees and sediment. Lifted by the floods, the penstock is destroyed at several locations and falling trees have also caused damage. The last 100m or so of the penstock escaped damage as it is laid underground – a more favourable project design solution in the long run.

The Tafitoala project will be located upstream of Tafitoala river on the west side of Upolu. Project components will include intake, headrace and penstock, power house and access road. A Tyrolean weir with sand trap is also proposed.

The Faleata scheme is a combined drinking water and small hydro scheme on Savai’i island. An existing water intake for water supply operated by Samoa Water Authority (SWA) is situated approximately 30m upstream of the water treatment plant and storage tank. There is an 80m elevation drop from the water intake to the water filter, and a generating plant will be installed upstream of the filters.

The intake of the new Faleaseela scheme is located in the wide valley of the Faleaseela river. However, the riverbed is narrow in a rocky terrain. Such topography is ideal for the construction of a Tyrolean weir intake with an attached sand trap. SWA operates a water intake for water supply approximately 30m upstream of the proposed dam and this will be considered in the project design and in calculating energy production. The headrace consists of a 1.2km long penstock and the new powerhouse will be located adjacent to the natural river bed at the orographic left side of the Faleaseela river. Two short new access roads will be constructed from the existing road up to the intake and down to the power house.