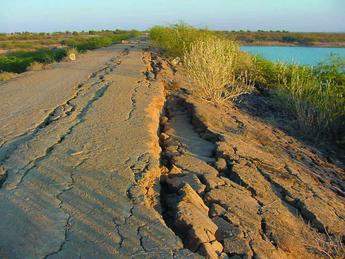 MOST of the existing dams have been designed against earthquake actions using the pseudo-static approach with an acceleration of 0.1g. Although, this approach is considered obsolete today, it is still used for the design of cofferdams and temporary structures. This outdated concept is even considered to be adequate in regions of high seismicity. In regions of low to moderate seismicity, seismic action is ignored for cofferdams and temporary structures at the dam site. This is not unusual for seismic actions, as for example these are still ignored in the design of underground structures (tunnels and caverns).

For the hydrological design of cofferdams, a flood with a return period of 10 years is often used. The relatively short return periods of floods and earthquakes for the cofferdam design are in contradiction with the design criteria used for the dam. Both for the seismic and flood safety of large dams, the maximum credible earthquake (MCE) and the maximum probable flood (PMF) are used, which correspond to events with return periods of say 10,000 years.

Typical earthquake damage of earthfill dams caused by the 2001 Bhuj earthquake in Gujarat, India are shown in Fig. 1. Most of the 245 dams damaged during this earthquake were not designed against such an event. This kind of damage may also be expected in cofferdams if seismic actions are ignored in the design.

Flood damage of cofferdams during different stages of dam construction are shown in Figures 2 and 3. In the case of Rogun dam, which would be the world’s highest dam if completed, the cofferdam was washed away in a major flood before dam construction even began (Sirozhev et al., 1993; Fig. 2).

According to current practice large dams have to be able to withstand the effects of the MCE and the PMF. These are the most severe events that could affect the safety of a dam, and they are considered to have a return period of several thousand years. Typically 10,000 year floods are assumed, and in the case of seismic ground motions a 10,000 return period is taken in regions of low to moderate seismicity (icold Bulletin 72, 1989; Wieland 2003). Temporary structures do not have to satisfy such stringent criteria.

It should also be pointed out that in the case of seismic design, considerable improvement in the seismic resistance of cofferdams can be achieved if the general design requirements and recommendations outlined in ICOLD bulletins 120 (2001) and 123 (2002) are observed.

Method 1: Seismic ground motion for temporary structures according to Eurocode 8 ‘Design of structures for earthquake resistance’

where the PGA is according to the building code, tro = 475 years (probability of exceedance of 10% in 50 years), for k a value between 0.3 and 0.4 can be used depending on the seismicity of the region and

where tc is the duration of the construction phase and p is the acceptable probability of exceedance of the design seismic event during this phase, typically a value of p = 0.05 is selected.

Therefore, assuming k = 0.35 and a construction phase of three years, during which the cofferdam must be fully functional, results in PGAc = 0.48 PGA, and for a cofferdam, which may stay for 10 years, we obtain PGAc = 0.74 PGA (Note: For very important cofferdams, tro, may be larger than 475 years and thus the PGA shall be taken for that longer return period).

In general, building codes exclude dams, power plants, hydraulic structures, underground structures and other appurtenant structures and equipment. It is expected that separate codes or regulations cover these special infrastructure projects. However, only few countries have such regulations. Therefore, either the ICOLD Bulletins (ICOLD Bulletin 123, 2002) or the (local) seismic building codes (Eurocode 8, 2002) are used as a reference.

The seismic building codes are very useful reference documents for checking the design criteria for a dam and the appurtenant structures. As the return period of the safety evaluation earthquake (SEE) of a large dam is usually much longer than the return period of the design earthquake for buildings, which in many parts of the world is taken as 475 years (Note: In the new building codes of the US and Canada the seismic forces are determined based on a reference return period of 2500 years and the resulting (effective) ground accelerations are multiplied by a factor of 2/3. This results in higher seismic forces in areas of low to moderate seismicity as compared to the traditional concept where a return period of 475 years is used irrespective of the seismicity of the region), the PGA values of the SEE should be larger than that of the design earthquake for building structures with a 475 year return period multiplied with the importance factor for high risk projects. If this basic check is not satisfied, then a building located at the dam site would have to be designed for stronger ground motions than the dam. This does not make sense. In such situations the seismic design criteria have to be reviewed thoroughly, additional seismic investigations may be needed or a sound justification must be given.

The probabilistic approach can be used to determine the return period, Td, of the design earthquake or design flood of a cofferdam or a temporary structure.

The derivation of the return period of the design earthquake or design flood (referred to as design event) is as follows:

Probability of non-occurrence of design event in one year

Probability of exceedence of design event, p, in T years

Solving for Td from eq. 5, if p and T are given, yields

For the design of cofferdams the return period of the design flood is often taken as 10 years. If construction lasts two, five or 10 years then the probability of exceedence of the design event according to eq. (5) is 19%, 41% and 65% respectively. In such situations it is quite likely that a cofferdam will be damaged during a flood.

If the design flood of a cofferdam is taken as 50 years then for construction periods of two, five and 10 years the probability of exceedence of the design event is (eq. 5) 4%, 10% and 18% respectively.

The simplified risk analysis can be performed as follows (R: risk):

Where the annual failure probabilities can be taken as

If Td0 is the reference return period of the design event for the cofferdam or a temporary structure, then the risk reduction, dR = Rd0 – Rd, may be balanced by the additional construction costs of the cofferdam, i.e.

where C0 are the costs of the cofferdam designed for Td0, then in view of eqs. 9 and 11 we obtain the following implicit equation for the optimum return period of the design event, Td:

Equation 13 is an implicit equation for the unknown Td, which can be solved by a standard equation solver as e.g. the one available in Excel.

Example a: Assuming a return period of the design event of Td0 = 10 years, a service life of T = 5 years, and damage costs of C = 3 C0, we obtain the following equation for Td

Example b: If the service life of example (a) is reduced from five to two years we obtain

The solution is: Td = 70 years. Thus, dam strengthening would be cheaper than buying an insurance coverage.

From the above examples it can be noted that the design period must be increased substantially if the consequences of a cofferdam failure become larger than the initial construction costs and if the duration of the construction period becomes rather long, which is not that unusual for many large dam projects.

Although these examples are rather theoretical, because the relation between cofferdam costs and design period Td may not be expressed by the simple expression of eq. 13. In practice, we would have to perform cost estimates for different cofferdam designs with design return periods of say 10, 50 and 200 years and to use interpolation between these values to get the costs for other Td-values.

Because of the large amplification of the acceleration response in the crest region of most concrete dams – amplification factors from 7 to 10 are possible for concrete dams subjected to moderate earthquake action – it is necessary to design any equipment located in this region for the corresponding crest response spectra.

Mass movements are common features during strong earthquakes in mountainous regions and also during heavy rainfall and large floods. Therefore, the possibility of earthquake or rainfall-triggered landslides, debris flows, rockfalls and avalanches etc. must be considered when assessing the general hazards of mass movements at dam sites also during construction. The freeboard of cofferdams should account for waves caused by landslides into the reservoir.

Based on the analyses carried out in this study the following conclusions may be drawn for the seismic and/or hydrological design of cofferdams and other temporary structures of a large dam project:

• The return period of the design event (flood, earthquake) depends on the service life of the temporary structure and the accepted probability of failure during the service life

• For a service life of 5 years, a cofferdam should be designed for an event with a return period of 22.9 years (failure probability of 20%) or 98 years (failure probability of 5%) respectively. These return periods are considerably longer than the 10 year design flood, which is often used for cofferdam design. Thus flood damage of cofferdams is not unusual.

• The need for strengthening of a temporary structure of cofferdam can be determined quantitatively based on a risk analysis in which besides the probability of failure also the consequences of failure and the cost for strengthening are taken into account. If the service life of a cofferdam is relatively long and/or the consequences of a cofferdam failure are large then relatively long return periods of the design event are needed.

• It is problematic to accept a standard flood with a return period of 10 years as a guideline for the design of cofferdams. There is a need for a more rational assessment, which can be carried out on the basis of a probability of failure analysis or a simplified risk analysis, which accounts for the consequences of a cofferdam failure.

• In the case of seismic design considerable improvement in the seismic resistance of cofferdams can be achieved if the general design requirements and recommendations outlined in ICOLD bulletins 120 (2001) and 123 (2002) are observed.