With the latest research from Denmark, the development of wave power could one day create an industry comparable to wind power and have implications for the turbine business and other small hydro 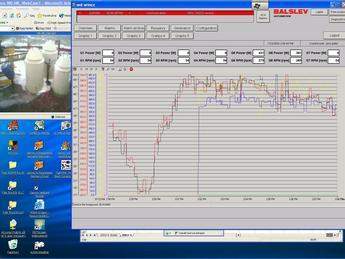 When associated professor J.P. Kofoed from Aalborg University started the first turbine onboard the Wave Dragon prototype in May 2003 sending power to the local grid in the northern and remote part of Denmark, a major milestone in the effort to harness wave energy was reached. The world’s first offshore wave power delivered to the local grid was the result of ten years of pan-european research and development. It outlines promising perspectives for the commercial development of a wave energy industry.

Wave Dragon is an offshore wave energy converter of the overtopping type in which each unit will have a rated power of 4-10MW depending on the wave climate. As part of the development activities towards a full size production plant in 2006, a grid connected prototype of the Wave Dragon at a scale of 1:4.5 of the North Sea is presently being tested in a Danish fjord.

• The main structure consisting of a patented double curved ramp and a water storage reservoir.

• A set of low head propeller turbines for converting the hydraulic head in the reservoir into electricity.

When waves have been focused by the reflectors, they overtop the ramp and fill the reservoir, which is situated at a higher level than the surrounding sea. This hydraulic head is used for power production through the hydro turbines.

Wave Dragon is unique among wave energy converters as it uses the energy in the water directly via water turbines in a one-step conversion system. This yields a very simple construction in which the turbines are the only moving parts.

Yet Wave Dragon represents a very complex design where large university and industry efforts have been spent on designing, modelling and testing in order to:

• Reduce (the effect of) forces on wave reflectors, mooring system.

• Develop an efficient turbine for extremely low and varying head.

The Wave Dragon is moored in relatively deep water; at least 25m, and preferably deeper than 40m, to take advantage of the ocean waves before they lose energy at the coast. This is in contrast to many known wave energy converters that are either built into the shoreline or fixed on the seabed in shallow water.

Wave Dragon is constructed with open air-chambers where a pressurised air system makes the floating height adjustable. Thus the ramp height can be adjusted to yield the maximum overtopping efficiency in different wave heights.

It is designed to be constructed in a combination of reinforced concrete and steel. A full size unit for a 24kW/m wave climate will have a weight of 22,000t including ballast and a width of 260m between the tips of the wave reflectors. The reservoir capacity will be 8000m3.

In coastal constructions and most offshore devices, extensive efforts are made to avoid overtopping. With its double curved ramp and wave reflectors, Wave Dragon is deliberately designed to maximise the amount of water that overtops it as waves reach it.

The concept was conceived in 1987 by Erik Friis-Madsen, Löwenmark FRI and Wave Dragon ApS, and patents were applied for in 1994. Physical tests however did not begin until 1998, when extensive testing on a 1:50 model was carried out at Aalborg University and University College Cork. During these tests a generic formula predicting overtopping quantities based on wave height, wave period and ramp height was developed. This formula is currently being verified in the prototype tests. Special interest has been given to the shape and angle of the reflectors as well as the curvature of the ramp to optimise the capturing efficiency.

The function of the wave reflectors is to concentrate the wave energy in front of the ramp and thereby increase the water volume overtopping the ramp. As waves reach the ramp, they change in geometry and elevate, as they do at beaches. The Wave Dragon ramp is very short and relatively steep to minimise the energy loss that every wave faces when reaching a beach. The special elliptical shape of the ramp optimises this effect, and model testing has shown that overtopping increases significantly compared to a simple slope.

In order to achieve efficient operation in low as well as high wave conditions, the crest height of the device can be adjusted by regulating the air pressure in the ballast tanks that have apertures in the bottom of the hull.

There are quite complicated correlations between wave height, the geometry of the ramp and wave reflectors, the floating height of the Wave Dragon and the amount of water that overtops and can be stored in the reservoir. Many simulations and model tests have been carried out but more reliable and refined results will only be available with more testing at sea.

Preliminary results from the prototype testing seem to verify the predicted overtopping, and thereby the energy absorption and performance of the Wave Dragon structure.

The operating conditions of the turbines on the Wave Dragon differ strongly from those in a normal hydro power station:

• The turbines have to operate at very low head values ranging from 0.4–4m, which is not only at the lower limit of existing hydro power experience, but also an extremely wide variation.

• Due to the stochastic time distribution of wave overtopping and the limited storage capacity, the turbines have to be regulated from zero to full load very frequently.

• Turbines have to operate in a very hostile environment, with only a minimum of maintenance.

Early in the project it was concluded that the turbines had to be as simple and robust as possible, with an absolute minimum of moving parts. Thus, a design with both fixed guide vanes and fixed runner blades was chosen. The result was a low head turbine specially developed by the Wave Dragon team and tested at the Technical University of Munich. This development was funded by an EC Joule Craft project in 1998-2000. The turbine geometry has been designed and a model turbine has been built and tested based on the experience from the designer and extensive use of CFD analyses. The resulting efficiency of the single turbine is 91–92% in the relevant head and flow ranges.

Efficient operation over the wide discharge range is ensured by using 16 relatively small turbines which can be switched on and off individually, rather than a few large turbines. In order to grant a high efficiency throughout the wide head range, the turbines are operated at variable speed, using inverter-controlled permanent magnet generators.

Based on simulations carried out at Technical University Munich it has been found that for maximum energy production, the turbines need to be switched on and off very frequently. In order to make this viable, two alternative solutions have been devised: a hydraulically operated cylinder gate upstream of the guide vanes and a siphon intake. Both designs have been considered worth pursuing and are being tested on the prototype. The peak efficiency of the turbine with the siphon intake was around 1.4% lower compared to the cylinder gate version. As the added reliability might outweigh this disadvantage it was decided that both versions should be tested.

Two alternative turbine runners, a 3-bladed and a 4-bladed design have been developed. For the real sea tests, the 3-bladed runner has been chosen. This runner has a slightly smaller efficiency at lower unit discharge values, but it holds a far greater potential for processing big discharges, which will give a distinct advantage in combination with the large overtopping expected from the improved ramp profile.

The turbines onboard the prototype have only been commissioned fairly recently, thus experience from real sea operation is still limited. During the commissioning, however, the performance of the generator sets was found to be in perfect agreement with the expectations based on the model tests.

As the Wave Dragon is a floating device, the calculation of energy production is not a straightforward task. The overtopping inflow depends on the wave height and the crest height, which again is influenced by the water level in the reservoir due to the immersion of the hull. The reservoir level depends on the overtopping and on the turbine discharge, which is a function of the turbine head and speed, with the turbine head again depending on the crest height and basin level.

Thus, there are multiple interdependencies between most of the parameters involved. This makes maximising the overall efficiency or the annual energy output a very complex task, especially as a great number of parameters need to be optimised and the effect of any parameter change has to be studied for a number of different sea states.

A number of parameters influence net power production including:

– Physical dimension and geometry of the converter (ramps, reflectors).

– Turbine design and the number of turbines

• Size of the energy converter.

• Availability, including accessibility on the site and maintenance strategy.

A comprehensive simulation programme is being developed at the Technical University Munich, which will provide a planning tool to define an optimum combination of these parameters for any specific future application. These simulations, which are based on the overtopping formula developed at Aalborg University, will now be compared to test results acquired on the prototype in real sea tests.

The Wave Dragon research project will move the wave energy technology from university level to a pre-commercial stage where a 4-7MW unit will be deployed in North Atlantic waters in 2006 covering the electricity consumption of 3000 to 5500 households. Wave Dragon will in the future most likely be deployed in schemes like offshore wind farms in the 100-250MW range or larger. These Wave Dragon units will have capacities of 7-10MW.

This work may also have implications for the hydro turbine industry. With the deployment of, for example, ten unit Wave Dragon farms, propeller turbines will be produced in series of 160 units. This could transform a part of the hydro turbine industry from single unit production to series production, resulting in significantly lower propeller turbine production costs. The large-scale series production of Wave Dragon type turbines could therefore lead to an increase in small hydro power installations due to this reduction in costs.

The first 7MW deployed demonstration unit will cost US$2309/kW all inclusive (planning and permissions, mooring, sub sea cable). This corresponds to a production price of US$0.13/kWh. It is expected that this figure will be reduced due to series production, experience and stepping up to more energetic wave climates. The goal is a capital expenditure well below US$1720/kW resulting in US$0.05/kWh as a realistic target price for wave generated electricity.

Financing a US$9.5M development project with a 10 year-plus time frame and moreover involving significant technological and market risks has been a challenge. At the core has been a committed group of companies and three university departments determined to solve the challenging scientific problems. These companies have invested some US$4.4M in the development during the last years. This has been supplemented with external funding. The European Commission has provided a total of US$2.5M for developing the turbine and manufacturing and testing six turbines offshore. Wave tank tests and constructing and testing the prototype rig have been supported by a US$2M grant from the Danish Energy Authority. To cover additional (unforeseen) costs the Danish utility Elkraft System has contributed US$300,000 together with university funding and charity trust funding covering US$240,000.

The prototype project has only been possible with generous support funding from the European Commission (Contract No: ENK5-CT-2002-00603), Danish Energy Authority, Elkraft System, The Obel Family Trust and the dedication of the participating partners.