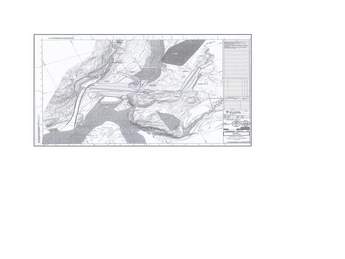 The Peribonka dam is in construction in the heart of the province of Québec, Canada. The 385MW project, owned and commissioned by Hydro-Québec, consists of a main earth dam, across a main and a secondary valley, and two main dikes. The project is due to start power generation in 2008.

Key to the construction of the dam is exceptionally complex geotechnical works. Shortly before procurement, the actual condition of the subsoil was discovered to be so much more difficult than anticipated, that it could put into question the feasibility of the dam. The bedrock was discovered to form an exceptionally deep depression. In effect the bedrock, made of granite and anorthosite, forms a glacial gully about 115m deep under the fluvial deposits, which themselves constitute a highly permeable formation. This would necessitate sealing of the alluvia underneath the future dam by a deep cut-off wall. Such a wall would have to be excavated in extreme conditions: depths of 115m, and rock sockets in quasi vertical rock faces.

The construction of such a cut-off wall is a challenge for the most advanced techniques available in the geotechnical construction field today. Considering this, Hydro-Québec and the designers SNC Lavalin opted for a compromise: a plastic concrete cut-off wall partially embedded in rock, leaving open windows at the wall/rock interface. These windows would be later cement grouted to complete the sealing of alluvia underneath the dam.

In response to the tender, specialist contractor bauer Spezialtiefbau of Germany came up with construction techniques allowing a more secure alternative solution, allowing full embedment of the plastic concrete cut-off wall into the bedrock (see Figures 1 and 2).The company was awarded the contract for all geotechnical works in February 2005.

Under the dam, in the main valley in the area of the deep glacial gully, the riverbed alluvia present highly variable fine particles content, ranging from silty soils to coarse gravel and cobbles, with permeability ranging up to 1m/sec in those areas.

These could jeopardise the construction of the cut-off wall with open slurry filled trenches down to such depths: high losses of bentonite fluid were feared in the coarse alluvia areas.

In addition large and small boulders could be expected. This could further reduce the stability of excavated trenches.

To mitigate these risks, pressure grouting of the alluvia was decided within the geotechnical works scope. Along the cut-wall axis, on about 10m width, the alluvia were to be cement grouted through tubes à manchettes on their full depth, down to the bedrock at approximately 120m depth in the deepest area. This solution was intended to reduce the permeability of the alluvia, and stabilise the boulders. It would also improve the safety of the plastic cut-off wall.

In the main and secondary valleys, as well as the main dike, locally the bedrock presented relatively weak and weathered areas. Hence it was to be treated by cement grouting under pressure, at depths reaching 145m in the area of the glacial gully.

Moderate seismic activity in the region could result in the liquefaction of alluvia. Because to this, and in order to limit the vertical movements of the alluvia and the fills under the dam’s weight, vibrocompaction of these soils in depths exceeding 40m was included in the geotechnical scope.

The geotechnical works were carried out from April 2005 to October 2006. Three Bauer cutters were mobilised for the project:

•CBS CBC 135 BC50, able to reach 135m depth, a prototype especially manufactured for the Peribonka project.

In peak times, the site necessitated more than 120 employees and Bauer workers, including more than 15 geotechnical engineers.

The highly variable nature of the alluvia presented specific difficulties, forcing Bauer to change and adapt the drilling and grouting techniques several times to meet the actual conditions.

As for the bedrock, during the drilling and grouting campaign it was realised that the gully presented an extremely chaotic geometry: beside high cliffs of quasi vertical rock faces, rock overhangs were also discovered, together with variations of the bedrock surface slope in practically all directions.

The presence of boulders in much higher frequency than originally expected was also discovered. In particular boulders were encountered near the bedrock, resulting in increased difficulty in recognising the actual location of the bedrock.

Both these observations necessitated a large number of additional investigation drillings, both vertical and inclined, to better identify the geometry of the gully before the start of the cut-off wall construction (see Figure 3).

Additional works and added difficulties due to boulders resulted in delays in the fall of 2005, necessitating acceleration measures: the time consuming alluvia drilling and grouting were carried in the winter months of December to March under the protection of a heated shed, which covered the central area of the main valley. The temperature during these months were in the range of -20 to -30°C, sometimes reaching below -35°C.

The deep cut-off wall was constructed progressively from the deepest areas towards the shallower areas, by successive panels, leaning each on the previously constructed panel.

Bauer has implemented this method on other projects. It allowed the safe construction of the wall in the adverse circumstances created by the chaotic geometry of the bedrock as well as the highly frequent presence of boulders. The method allowed Bauer to keep the verticality of the wall well within the specified tolerance of 0,5%.

The high accuracy of the cut-off wall construction was assisted by continuous measurement of the cutters position, through continuous monitoring by inclinometers and gyroscopes installed on-board the cutters. The stringent quality control organisation on site included real time monitoring of cut-off wall joints and immediate implementation of mitigation measures. The project, completed successfully and on schedule, is expected to allow the smooth construction of the dam body and the completion of the Peribonka hydroelectric project to schedule. Commissioning of the first TIG unit is expected in December 2007.