Cranes on track at Dinorwig

A positioning system has been installed on three gantry cranes in operation at Dinorwig pumped storage project in the UK, to ensure continued and safe operation 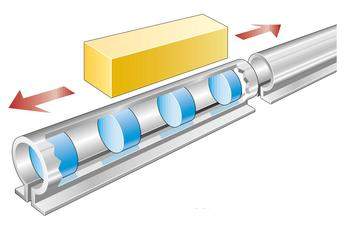 Located only a few miles from Snowdon, the highest mountain in Wales, Dinorwig power station was regarded as one of the world’s most imaginative engineering and environmental projects upon its completion in May 1984.

The pumped storage power plant comprises of 16km of underground tunnels, located deep below Elidir Mountain. Its construction required 1M tonnes of concrete, 200,000 tonnes of cement and 4500 tonnes of steel. The station’s six generating units stand in Europe’s largest manmade cavern, 750m inside the mountain. Adjacent to this lies the main inlet valve chamber housing the plant that regulates the flow of water through the turbines.

Dinorwig’s reversible pump/turbines are capable of reaching maximum generation in less than 16 seconds. Using off-peak electricity from the country’s coal-fired and nuclear power stations, Dinorwig pumps as much as 7Mm3 of water from lake Llyn Peris at the foot of the mountain over 600m up to Marchlyn Mawr, the lake at the top of the mountain. In generating mode, the power station can produce 1728MW of electrical power for a period of up to five hours.

Dinorwig has been designed to have an operational life of 40 years, meaning a thorough maintenance schedule is essential to keep the power station’s six generators in reliable working condition. Every three years each generator must be dismantled and maintained. Each generator, weighing over 450 tonnes, requires large cranes to be utilised for their dismantling. For this purpose, running across the 180m long generating hall are two 250 tonne gantry cranes and one 10 tonne gantry crane. There are two tracks on two different levels – the higher track for the two 250 tonne cranes and the lower track for the 10 tonne crane. With this arrangement, it is possible for the 10 tonne crane to travel under the two 250 tonne cranes. With all three cranes being manually controlled, engineers at Dinorwig were concerned that it could be possible for the cranes to collide, prompting them to look at solutions that would semi-automate the cranes and incorporate anti-collision protection.

To avoid this problem, Dinorwig’s engineers decided to install a positioning system onto each crane, with a PLC to read the positional information and communicate with the other cranes’ PLCs via a radio link. The positioning system chosen for this task was SICK|Stegmann’s Pomux KH53 Linear encoder system – a non-contact absolute positioning encoder that enables the position of the cranes to be calculated with millimetre accuracy. The system comprises just two component parts – the read head and the measuring elements.

Two metre long measuring elements, incorporating a number of permanent magnets, are placed end to end along the full 180m length of the track. The magnets within the measuring elements are fixed in place such that the separation between them is unique and never repeated. When installed in a specific order, the magnet separations form an absolute code, which is read by the read head. The read head, mounted on the crane, can detect at least three magnets at any position along the travel. The read head can therefore detect two unique magnet separations and hence identify its absolute position.

The construction of the system enables multiple read heads to be used with a single run of measuring elements. Therefore, in this application it was only necessary to install one set of measuring elements to serve all three cranes. The read head produces an SSI or Profibus DP digital output with a resolution of 0.1mm. In this application it was desirable to feed the positional data into the PLC in an analogue format. To facilitate this, the SSI data was converted to a 0-10V analogue signal using an IV251 interface module called the. The IV251 is manufactured by MKS in Germany whom SICK represent in the UK.