Ensuring that pipelines run safely and effectively is of paramount importance to oil and gas operators, which means innovation in pipeline inspection is highly valued by industry players. Shirley Accini speaks to ExxonMobil’s Dr Stefanie Asher about new sensor technology that will fulfil the industry’s needs. 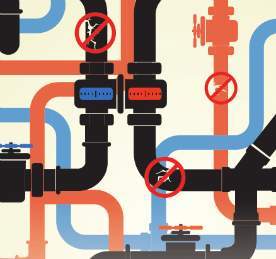 In constant use, transporting billions of barrels of crude oil and petroleum products thousands of miles – under oceans, mountains, countryside and cities – pipelines are vulnerable to cracks, corrosion, damage from third parties and manufacturing flaws. Another concern is that many of the pipes in use today are over 50 years old, and were built before construction and safety standards were established, making them more prone to safety issues such as failures, leaks and spills.

Ensuring the integrity of pipes entails regular examination and often high-tech maintenance programmes. While the outsides of pipelines are generally straightforward to inspect, internally, it is a more complex affair. Operators have a choice of data-collection methods and tools such as in-line inspections (ILI), direct assessment and pressure testing. ILIs are conducted because of their ability to locate, characterise and measure pipeline threats such as corrosion, mechanical damage and cracks.

These methods are based on ultrasonic or magnetic flux leakage (MFL) sensors, which are attached to smart pigs – devices that run along the inside of the pipe. The sensors collect data about the pipe’s condition and send it back to an operator to be analysed, so that any necessary repairs and maintenance programmes can be planned. But while these methods are used mainly to scan high-strength carbon steel pipes, they are unable to inspect those lined with corrosion-resistant alloy (CRA).

"Feasibility testing of a prototype tool has demonstrated that MEC ILI will be able to accurately detect corrosion-damaged features, also known as pinholes, down to 6mm in diameter."

ExxonMobil’s Dr Stefanie Asher explains: "Ultrasound sensors cannot transmit the sound wave through the interface between the CRA liner and the carbon steel base pipe, while MFL sensors are unable to permeate the magnetic field through the CRA liner. According to the Pipeline Operators Forum, there are approximately 400km of CRA-coated pipelines in service, the majority of which are bimetallic. It is anticipated that the use of CRA pipelines will increase as production of more unconventional resources, in more remote locations, develops."

Asher is part of an ExxonMobil team that is working – in collaboration with electromagnetic inspection specialist Innospection – on ILI sensor technology that will fulfil this need. Their magnetic eddy current (MEC) ILI tool is based on a combination of MEC and magnetic flux.

"Conventional eddy current inspection methods can only inspect near the surface of carbon steel, so examination is limited to surface-breaking flaws or thin components," she says. "However, by magnetising the material, the eddy currents can penetrate deeper inside the material. The magnetic field will be disrupted in the presence of a flaw, which will be detected by the eddy current coil."

"The MEC ILI tool is being developed as a free-swimming inspection technology with parameters similar to other industry ILI tools," says Asher. "The sensors will be designed to detect corrosion and cracks in pipeline steel, with the crack sensors oriented in the circumferential direction."

Asher recently announced the results of feasibility tests carried out on the technology. Over 80 pull tests were undertaken to determine the tool’s detection capabilities and speed sensitivities, conducted on a 219mm X5 steel pipe lined with 3mm of Inconel 825 pipe. Four types of defects were introduced in the pipe, representing the natural defects anticipated in service:

The defects were machined with variations in location and size. All the defects were detected by the sensors, including pinhole features smaller than 10mm, and detection was not affected by speeds of up to 0.75m/s. According to Asher, the MEC ILI tool offers many advantages over conventional ILI tools.

"In CRA-lined pipelines, the MEC tool can inspect the CRA liner as well as the underlying carbon steel," she says. "It can also inspect through non-metallic (plastic) liners, as well as thick-walled (more than 1in) pipelines without requiring a liquid medium, which is typically needed for other ILI tools scanning thick pipes. The technology works independently of the pipeline media, meaning it can operate in pipelines containing gas, liquid or a combination of both."

The MEC ILI tool is also expected to provide an overall improvement to feature detection, and has been established as a method for highlighting small areas of corrosion damage in tanks.

"Feasibility testing of a prototype tool has demonstrated that MEC ILI will be able to detect corrosion-damaged features, also known as pinholes, down to 6mm in diameter," Asher adds. "The eddy current technology is also tolerant to surface debris, reducing the risk of an inspection failing due to a lack of pipeline cleanliness."

Since the detection capabilities exceeded expectations, future development will continue based on the current prototype, and will include:

"The initial tool will be designed for pipeline diameters of 6-8in," Asher says. "Future tool development will expand this range into larger diameters, and could also incorporate sensors optimised for the inspection of axial cracks."

The tool is still at the prototype stage, and work continues on understanding its limitations, such as the minimum amount of corrosion-related damage that can be detected.

"As the industry progresses in more aggressive environments, the selection and use of CRA is anticipated to increase."

"In addition, the current technology focus is on upstream applications, so the crack-detection sensors are arranged to inspect for circumferentially oriented cracks," says Asher. "The MEC tool is not currently able to detect cracks that run down the length, or axis, of the pipe."

Another aim will be the detection of small features, such as pinholes.

"Pinhole pits are less than one wall thickness, or 10mm, in diameter, and continue to be a focus area for ILI tool development," says Asher. "These features are typically beyond the demonstrated capability of common ILI tools; but most of the corrosion mechanisms found within upstream pipelines can produce pitting-type wall-loss features. Although small, these pinholes can still cause integrity issues. Knowledge of the presence, location, and extent of pinholes derived from the MEC ILI tool would strongly benefit repair and replacement decisions.

Future development of the tool looks encouraging: the replacement of older pipelines, and the direction of E&P activities into remote locations to tap unconventional energy resources like oil sand, will increase the requirements for pipeline inspection.

"Initial development of MEC ILI was motivated by the need to inspect CRA-lined pipelines and detect small corrosion features," explains Asher. "As the industry progresses in more aggressive environments, the selection and use of CRA is anticipated to increase. And although CRA is applied for its superior environmental resistance, inspection may still be recommended."

ExxonMobil already has a wide collection of inspection tools, so how will the MEC ILI fit in with this range?

"Development in MEC ILI is not meant to replace current ILI tools, but rather to supplement and expand the ILI technology portfolio," explains Asher. "MEC sensors offer a different approach to conventional magnetic flux leakage or ultrasonic ILI tools.

"We anticipate that the tool will be run at a similar frequency to other ILI tools. Although the MEC sensors are less sensitive to debris, routine pipeline cleaning prior to the ILI run is still recommended to increase the probability of success and data quality."

Following the success of the feasibility tests, ExxonMobil and Innospection will continue development on the MEC ILI tool, but it will be some time before the technology is ready to go on the market.

"ExxonMobil is pursuing MEC ILI development in a joint industry initiative, providing a broad industry perspective on tool development and fostering technology deployment in the industry," says Asher. "A commercially viable tool is anticipated to be available in the coming years."