By its ability to run efficiently at low temperatures the organic Rankine cycle makes it feasible to operate combustion engines in the more economically viable and lower emitting combined cycle mode. In this progress report the author describes how Wärtsilä is developing forms of this technology that recover waste heat and convert it into useful energy, for both new and old plants. 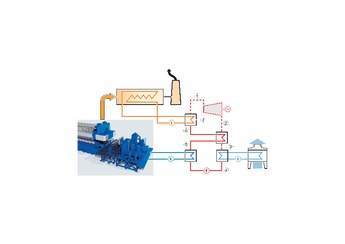 It is widely known that the waste heat energy derived from the exhaust gases of combustion engines can be converted into electricity. This has been practised for many years in combined cycle mode with gas and steam turbines, but the relatively low cost of fuel has discouraged the installation of (costly) steam turbines in combination with the smaller power outputs of reciprocating engines. Interest in utilising steam turbines in this way has, however, been renewed as a result of fuel price increases during recent years and the need to reduce emissions. The size of the steam turbines typically used in these plants has been 5-20 MWe, which implies employing between 3 and 11 large four stroke engines, or 50-190 MWe of total engine power. The plant’s power output is increased by 8% without adding any further fuel, which corresponds to an efficiency increase from 44% to 49%.

But for smaller plants, requiring matching steam turbines below 1 MWe, the installation of steam systems is currently not viable owing to their high specific installation cost.

If steam is not a practical option, what other solution could be available in order to improve plant efficiency? Wärtsilä has been evaluating this topic in a number of solutions in which both engine coolant heat and exhaust gas heat are recovered. The first question to ask is – why must we use steam? Cannot other mediums carry out the same task? The principle after all is the same: boil a liquid into pressurised gas, make it turn a turbine, recover it, and do it again.

Initial R&D activity focused on a variety of hydrocarbons such as propane and butane. They have properties that are less than ideal, mainly because they are both toxic and inflammable. So Wartsila turned its attention to the fluids used in the refrigeration industry. This suggests employing a system based on the organic Rankine cycle (ORC) to generate additional small amounts of electricity. To make a smaller engine ORC plant viable, the ORC must be built as a pre-fabricated unit in order to speed up the installation and keep the cost low. The ORC is already being applied in geothermal power plants and in other low temperature applications such as waste heat from industrial processes.

Electrical power is most commonly generated in processes based on Rankine cycles using water as the working fluid. The steam cycle is not efficient in combination with low grade heat sources, owing to the fact that steam cycles require superheating and relatively high system pressures. The basic difference between traditional steam cycles and organic Rankine cycles is that organic fluids, such as pentane or butane, are used instead of water. The fluid used in the ORC process can be selected to best suit the heat source, ie to suit the temperature and quantity of energy that is available to the evaporator. Water is typically preferred as the working fluid because of its non-toxicity, price and availability. Steam cycles require a heat source that has a relatively high temperature, typically over 400 °C, in order to be efficient. When the heat source is of a lower temperature, the ORC is more suitable because the fluids used in these processes will boil at lower temperatures.

Much of the research that has been carried out on ORC processes has focused on low-grade heat sources of up to 200 °C, and on the evaluation of different working fluids that can be used. However, as the exhaust gases from engine driven power plants are typically at higher temperatures than that, and as the engine coolant has a temperature of 80 to 90°C, the design of the process needs to be optimised in order to take full advantage of these disparate heat sources.

The setup of an ORC process is basically the same as for any other Rankine cycle. The ORC offers the possibility of utilising low-grade heat sources that normally cannot be used efficiently but are, in many cases, commonly available in industry processes.

ORC processes require little maintenance. The operation of the ORC plant can, in some cases, be fully automated and unmanned, thus making such a process more economical than typical steam processes. In some countries legislation dictates that a steam cycle plant operating with water needs to be manned at all times, but the ORC process uses an alternative fluid and there are presently no demands for such installations to be manned. This in turn results in reduced operating costs for an ORC installation. Smaller ORC units are often offered by suppliers as compact units and can be delivered ready for use. Bigger ORC installations are more like steam systems, where the components are separate and the installation is not a unit or a containerised module.

As with most steam cycles, the organic Rankine cycle is a four-stage process. One way to describe a basic ideal Rankine cycle is by following the changes that occur in each component in a system (Figure 1).

Phase 1-2: During this phase the high-pressure vaporised working fluid undergoes isentropic expansion inside a turbine. The expanding vaporised fluid drives the blades of the turbine and generates electrical power.

Phase 2-3: The vaporised fluid leaves the turbine and residual heat is transferred to a regenerator in order to pre-heat the liquid fluid before going to the condenser.

Phase 3-4: The fluid enters the condenser and undergoes isobaric cooling, which means that no change in pressure occurs. The fluid is cooled so that it condensates and excess heat is rejected.

Phase 4-5: The liquid enters the pump and the pressure is increased. The fluid will reach the higher pressure and some increase in temperature from an external heater can take place. Electrical power needed for the pump to function is usually taken from the process itself.

Phase 5-6: The fluid leaves the pump at high pressure and at a somewhat elevated temperature, and is pre-heated as a liquid in a gas-liquid regenerator.

Phase 7-1: The pressurised and vaporised fluid may if necessary be superheated.

The amount of work produced in the Rankine cycle is equivalent to the area within the phase change lines (Figure 1). The efficiency of the system is the work divided by the heat added to the process.

The efficiency of an ORC is normally between 10 and 20%, depending primarily on the choice of fluid, and on the temperature levels available to the evaporator and condenser. If the ambient temperature increases, or if the temperature level of the heat source is reduced, the power output of the ORC process will be reduced.

Making use of rejected heat

The company’s initial studies are analysing the feasibility of combined cycle electricity production using the exhaust gases (400ºC) and jacket cooling water (95ºC) from a 9 MWe Wärtsilä internal combustion engine. While waste heat utilisation for CHP and electricity generation has proved effective in large-scale power plants, this study will investigate whether the same is possible in a small-scale, distributed, generation application. For electricity production, an organic Rankine cycle is analysed.

Based on our modelling results, the most economical ORC configuration utilises only the exhaust gases in a topping cycle with a regenerator, while the most prolific uses both heat streams with a topping and bottoming cycle.

Using all heat available, the ORC can increase electrical output by up to 11%. In this case that is about 1050 kW of added electricity production.

Wärtsilä, which is a well known provider of flexible decentralised power generation solutions, specialising in the design and production of internal combustion engines (ICE) for these purposes, already has a portfolio of highly efficient turnkey power plants that utilise poly-generation methods. In order for poly-generation units to be successful, they must be adaptive so that dynamic hourly and seasonal electricity, heat, and cooling demands can be effectively met. Combined heat and power plants based on internal combustion engines are well established industrially, and produce electricity and heat with an efficiency of around 90%. In northern and eastern Europe, the heat output is normally used for district heating systems. However, during hot summer months there is little demand on the district heating network, and in its current investigation the company is looking at a possible solution to this shortfall, namely, combined cycle electricity production using an ORC, which applied to an ICE power plant will allow full utilisation of the engine’s waste heat throughout the year.

The efficiency of an internal combustion engine of Wärtsilä design is about 45%. From these estimates of efficiency, it can be concluded that at least 55% of the energy released by the fuel is wasted in the energy conversion process. The largest proportion by far of these losses is accounted for in the heat that is produced during combustion and rejected in the cooling system and exhaust. However, during summer months when heat demand is very low, even CHP plants must simply discharge this heat to the surroundings, often using air-cooled radiators. The company’s investigation, therefore, covers several power plant configurations that have the flexibility to meet changing market demands for heating, cooling, and electricity.

Current experience has shown that not all exhaust heat can be used, and some heat must be rejected into the atmosphere. The amount of heat actually available also varies, since the exploitation of heavy fuel oil (HFO) exhaust, for example, is limited by the dew point of sulphuric acid, and by the fact that diesel engines have lower exhaust gas temperatures than gas-fired engines.

On the other hand, both biofuels and natural gas are much more user-friendly in all respects, not only environmentally related ones. Most of the heat in exhaust gas can be recovered at temperatures as low as 110ºC. Accordingly, even with the limitations of engine technology, the longer term target should be to increase power output by 10-15% and to lift overall efficiency levels from today’s 45% to 49-52%.

Cost is a very significant factor. Steam-based waste heat recovery systems are complex and require a lot of auxiliary equipment. If we can move to factory-made ORC modules, control over investment costs will be greatly improved. This is not because ORC is some sort of cheaper option – rather it is because the systems are more confined and the associated risks can be limited.

The development work is well advanced, but much remains to be done. Heat recovery techniques must be optimised, as should exploitation of both the exhaust-gas and HT-circuit heat sources. The most suitable temperature levels, the heat exchange medium, and the turbine design for use in ORC technology all have to be determined. All this is in line with Wärtsilä’s aims as a technologically driven company – constantly to seek new solutions, the most viable route, the ideal fuel, and the highest levels of efficiency and profitability.