A versatile concrete repair product has been used on cracked and spalled concrete at the Upper Stillwater Dam in Utah, US 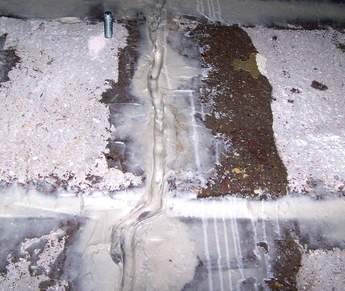 International Coatings, Inc is a manufacturer of high performance epoxy and urethane concrete coatings and repair. Over the years one of its most popular products has been the versatile epoxy patching material, ICO-Gel. ICO-Gel is a three part (epoxy resin, epoxy hardener, fill) 100% solids epoxy material. It contains zero VOC and has virtually no odor while being applied making it easy to work with, says the company. It can also contribute points to LEED projects for low emitting materials and building reuse (repairing concrete instead of removing and replacing). Originally designed to quickly and easily fill small crevices and cracks on vertical walls prior to coating, it has developed more and more uses over time. ICO–Gel is now used to repair steps, patch cracks and holes in floors, walls, and ceilings, repair corners in warehouses that have been damaged by fork truck traffic, bridge column repairs, as a skim coat on block walls to create a extra smooth surface, on large scale infrastructure repair projects, and everything in between.

Besides the standard ICO-Gel, several different versions with various cure times have been developed for different situations. Its been formulated in a medium cure (ICO-Gel MC) and fast cure (ICO-Gel FC) versions for installations where a quicker-cure product is required because of downtime or temperature restrictions. Unlike cementitious or acrylic-based patch materials it can be recoated in as little as six hours at room temperature when a more chemical resistant top coat is required. For cold temperatures requiring work to be done under 50F, ICO-Guard Cold Cure was developed. It can cure hard in 18 hours at 50F and works in temperatures down to freezing. In addition to the different types of cures it’s also available in a thickened up version, ICO-Gel XT (extra thick), for applications where thickness greater than 1” is required in overhead and vertical applications.

All the ICO-Gel versions are available in one gallon, three gallon and Bulk Packs (30 gallons) and coverage is approximately 30 square feet per gallon at 1/8” thickness. No special equipment or tools are required and ICO-Gel is easy enough to use by in house maintenance personnel, says International Coatings. When properly mixed ICO-Gel has a smooth and creamy texture and is normally applied with a trowel. A clean sound substrate is required so all surfaces must be properly prepped by mechanical abrasion (grinding, rough sanding, needle blasting, etc). ICO-Gel is then mixed with a slow speed paddle mixer or electric drill. ICO-Gel is trowel applied in a single step with no priming or topcoat is required, saving valuable downtown. It can fill holes up to 1” thick on vertical or overhead surfaces without shrinking or sagging.

ICO-Gel has been designed for both dry as well as damp adhesion to concrete and masonry surfaces. This makes it particularly well suited for vertical and overhead repairs where dampness is present like bridges, manholes and sewers. This also makes it the ideal concrete repair and patching materials for the hydro power industry where damp and cool conditions are the norm.

The United States Bureau of Reclamation was having trouble with cracked and spalled concrete on the Upper Stillwater Dam in Duchesne, Utah. The structure is a gravity dam that contains about a million and a half cubic yards of material. Shortly after the dam was completed in 1987, it began to show signs of superficial cracking caused by problems related to heat release. The unsightly cracks appeared on the downstream side of the dam. They were superficial and didn’t affect the safety or performance of the dam but they did allow a small amount of water to seep through.

USBR was looking for a product that could repair the cracks, holes, and spalled areas prior to the application of an elastomeric membrane to prevent further deterioration. Normally a cementious type patch material would be used but the wet conditions at the dam would make it difficult to apply and there were concerns on the adhesion. The work had to be done in cooler temperatures (while the water was low), there was constant moisture especially around the waterline and different areas required different thickness of the repair patch. The system also needed to cure quickly because the work had to be done before the water levels stared to rise.

International Coatings Manufacturers Representative Lance Renshaw of Protection Engineering thought ICO-Gel would be the ideal repair product for this project and recommended it to USBR, which agreed that ICO-Gel’s low temperature application ability, adhesion to damp concrete, quick recoat time, and ability to be applied in various thicknesses from feather edge up to 4” in one pass made it the perfect choice for this diverse application.

The concrete face of the dam was first sand blasted to a clean surface; the profile of the concrete was already rough enough for a coating repair system. The ICO-Gel was applied by hand trowels directly to the concrete. Because of its versatility it was used to fill small cracks 1/8” and less, to repair spalled areas of concrete sometimes over 4” deep, smooth out rough and abrupt areas of concrete at the joining lifts, and used to fill large cracks prior to the application of a flexible sealant. USBR was pleased with the performance of the ICO-Gel and the contractor was very impressed with how easy to use ICO-Gel was

Because of the success on the Upper Stillwater Dam project the USBR decided to include the ICO Gel system for product testing along with over 30 other patch materials for a spillway project. They ran a battery of 25 tests at their Technical Service Center including freeze thaw resistance, scaling resistance, setting time, cracking resistance, splitting tensile strength, and Coefficient of thermal expansion. Out of the field of materials ICO-Gel finished as one of the top two performing epoxy patch materials.

ICO-Gel MC and FC are now speced by the Bureau of Reclamation on the Grand Coulee Third Power Plant Overhaul. There is a 24,000 sq/ft concrete draft tube and its entire concrete surface had deteriorated a ½” over the years. This deterioration and the resulting uneven surface has slowed the flow of water through the tube enough to reduce the energy output of the turbine. USBR is going to rebuild the surface of the tube using ICO-Gel MC and FC at a ½” thick. The smooth coat of ICO-Gel will increase the flow of water through the tube causing increased power out put from the dam.