Clipper at the cutting edge

Despite problems on the domestic front US wind turbine maker Clipper is pressing on with plans for its mould-breaking new unit, an offshore monster 175 m high providing an output of 7.5 MW. It has already received tacit approval from the UK’s Crown Estate. 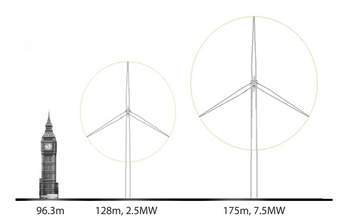 These are exciting times at Clipper Windpower, hitherto a supplier solely to the US?market, and the manufacturer of the largest wind turbine unit, at 2.5 MW, available there. It is now branching out into the wider world, through deals in the UK and the announcement of its ambition to create the world’s largest offshore turbine, the Britannia. Meanwhile back home its fleet is undergoing serious re-appraisal over failures in the field and its accountants are reporting a heavy loss on the recent year’s trading.

The prospective 7.5 MW turbine, intended for deep water applications, is something of a success even before it has been built. The UK’s Crown Estate has bought the first unit, because it wants to be seen to be supporting offshore wind development, and to experience for itself the problems of offshore operation. This is a brave initiative, given the three-fold scale-up and the fact that nothing tangible exists so far. What it has bought is the prototype, conditional on its being in a completed and operable state, although the organisation does not know yet where it will be sited: but it will be in deep water, well offshore, to gain experience in that environment, which is the stated aim.

The Crown Estate is not the only organisation showing great faith in Clipper’s ability to deliver a scaled up and reliable version of the Liberty. NaREC (Blyth-based New and Renewable Energy Centre, a test laboratory belonging to One NorthEast, the regional development agency) is supporting it with use of its facilities and some funding while One Equity, the private equity arm of banker JP?Morgan Chase has bought a 12.3% stake in the company, providing it with cash to fund development and help stabilise its problematic supply chain.

Clipper is pressing ahead with its new design based on the 2.5 MW Liberty which, uniquely among wind turbines, employs four generators with separate shafts powered by a single drive shaft and a large and complex gear train. This runs counter to accepted wisdom in Europe where the tendency is try and design out the gear train if possible, and indeed Enercon has a gearless design in production employing a large diameter annular generator. Meanwhile Liberty units in the field are experiencing blade and gear train problems. In summer 2007 a gear-timing issue in the drive train’s secondary stage was detected in some of Clipper’s turbines at the

20 MW Steel Winds site, near Buffalo in New York state. The cause was found to be a supplier quality deficiency in the drive train attributable to the manufacturing process. Under Clipper’s warranty, upgraded drive trains are being be installed in all eight turbines at Steel Winds. It is estimated that there are 50 more turbines operating at Clipper’s own Endeavor wind farm and Edison Mission Energy’s Jeffers Wind facility that will also require retrofitting, but no unit manufactured since October last year contains the fault, the company says.

The company is sanguine about these setbacks. CEO James Dehlsen said ‘We are getting through and making good progress’ and that problems with the drive train for the company’s turbines were ‘about 75 per cent solved’. Changes needed to reinforce the turbine blades are expected to be completed in the third quarter of this year.

Recent statements accompanying financial releases say that the company expects to make a profit next year. Pre-tax losses increased nearly 10-fold from $20m in 2006 to $192m (£97m) in the year to 31 December, but the headline loss included a charge of $107m racked up from ‘manufacturing difficulties’.

The good news after last year’s heavy losses is that the new financing has added $200m to the company’s balance sheet, a persuasive advantage when it is necessary to persuade component makers to sell to you in a tight market for turbine parts. The company believes the deal with One Equity should strengthen the company’s relationship with its supply chain and that component shortages have eased. It should therefore turn the corner in 2008, which will be ‘a year of transition’ with minimal profits but it should turn a profit in 2009. It has a strong forward book stretching to 2011, with 1700 MW of capacity on order. Last year, the company built 137 turbines, but has the capacity to build 400 per year. Turnover rose from $7.3m in 2006 to $23.9m, leading to a steadying (at 497½p) of the share price, which has lost a third of its value over the past 12 months. This is a share that was floated in 2005 at 200p and rose dramatically to a peak of 916p in June last year. Analyst Lehman Brothers said it expected the company’s shares to remain volatile over the next year but posits a favourable outlook for wind power in the US, and in particular in the market for turbines of 2.5 MW or more.

One Equity has paid $150 m (£76 m) for its 12.3 % stake in Clipper and taken two seats on the board. Clipper intends to use the money and One Equity’s reach into global supply chain areas to speed up manufacturing of 2.5 MW wind turbines for the rapidly expanding US market.

The prototype turbine will be assembled and tested at Clipper’s newly established centre of excellence for offshore wind at Blyth, north-east England, on a schedule expected to be completed during 2009 or early in 2010.

Development of the 7.5 MW unit will ‘build upon the advanced architecture and technology of Clipper’s Liberty 2.5 MW turbine’ which, in September 2007, was recognised for its high levels of efficiency, reliability and reduced cost of energy with a commendation award from the US DoE. Its four generators are driven by a huge gearbox with one low speed input shaft and four high speed output shafts. The generators are fully enclosed IP54 synchronous permanent magnet units, rated power 660 kW at 1133 rpm, 1320 VDC and available in either air-cooled or water-cooled versions.

Its patented variable speed system is reputedly simple and reliable. Power is delivered exclusively from the stator where it is rectified, incidentally eliminating the need for slip rings and brushes. The control system uses 3 phase 480V, embedded Motorola power PCs which provide algorithm processing repeated every 50 milliseconds. Through the system’s line power factor control, the unit rides through system faults and line outages for up to three seconds.

In developing this project there has been close collaboration among Clipper, One NorthEast and UK Trade and Investment, a UK government business development organisation. NaREC will provide a support package for engineering and testing, including its world-class wind turbine blade testing facilities. Engineering for the project will be shared between Clipper’s Advanced Technology Group, based in Carpinteria, California, and Clipper operations in Blyth.

The Crown Estate, which has a portfolio worth more than £7bn that includes urban property, farmland, much of Britain’s foreshore and all its territorial seabed, says that its wish to gain first-hand experience of developing deep water offshore wind technology is in line with the government’s aim of opening up Britain’s seabed to offshore wind farms. This is seen as vital to the UK’s drive to meet its renewable energy targets.