Clearing the load at La Confluencia

The Hochtief-Tecsa Joint Venture is using seven Gia Industri Haggloader underground loaders to clear excavated rock from more than 20km of tunnel during construction of the La Confluencia hydroelectric project in Chile; with a further three units on order 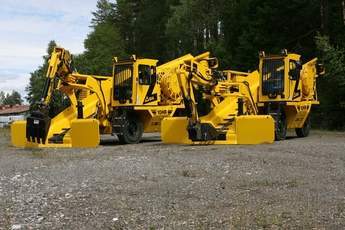 Seven Gia Industri Haggloader 10HR-B underground backhoe loaders are being used by main contractor the Hochtief-Tecsa Joint Venture for the excavation of tunnels on the La Confluencia hydroelectric project built in the Chilean Andes.

The rubber-tyred loaders, manufactured in Sweden, are being deployed to load spoil from the tunnel face via their backhoe and conveyor system onto haulage trucks for removal out of the tunnel and away from the site. This system means that the loaders can stay in place continuously until the spoil is cleared and the tunnel is ready for the next round of drilling and blasting.

La Confluencia is being developed 150km south of Santiago by the Tinguiririca Energia, an electricity operating company made up of Australian utility Pacific Hydro and SN Power, a Norwegian venture of utility Statkraft and the Norfund Power Invest AS fund.

The Hochtief-Tecsa JV, formed between the German company Hochtief’s Chilean subsidiary and the Chilean Tecsa SA, started work on their EUR 175M (US$253M) contract in January, working on a 70:30 basis to provide the engineering, procurement and construction for the project.

Located in the Tinguiririca Valley in the foothills of the Andes, the 158MW La Confluencia is a run-of-river project involving the design and construction of a powerhouse to install two turbines, approximately 20km of tunnel and two river diversions. Total cost of the project is US$350M.

La Confluencia is located on the Tinguiririca, Portillo and Azufre rivers and consists of intakes and conveyance systems on two branches diverting flows to a surface powerhouse.

Tunnelling forms the dominant part of the works, amounting to 41% of the direct civil costs.

The Andes are characterised by uplifted sedimentary, volcanogenic and intrusive units of highly variable nature. As a result, it has not been possible to predict the rock conditions that the contractor will find as tunnelling progresses. However, fast progress is necessary and as two tunnel faces are being worked upon simultaneously, together with ancillary underground works, clearing the spoil quickly is vital to the progress of the project. The projected rate of tunnel advance is around 9m per day to be achieved in two cycles of drilling, blasting, cleaning and reinforcing per 24-hour period.

The Haggloader 10HR-B model was chosen because of its ability to work in narrow spaces, being able to operate and manoeuvre in tunnels of between 4.5 and 6.2m in width. The bulk of the tunnels at La Confluencia are approximately 7m in width.

Another reason for using this type of unit was that the 10HR-B can load on a continuous basis. The back-hoe digging system loads the spoil onto the conveyor, which then fills the haulage vehicle with a constant flow. The conveyor can be raised and lowered to suit the loading height of different haulage vehicles. Once the haulage vehicle is full it is replaced with another and the 10HR-B therefore can work on a continuous basis until the spoil is cleared. The loading capacity is as high as 360m3 per hour.

The construction period for La Confluencia is expected to be three years, depending largely upon the rock conditions encountered by the tunnellers.