A programme to decommission Denmark’s nuclear facilities began in 2003, and cleanup is now entering the last phase. By Kirsten Hjerrild Nielsen. 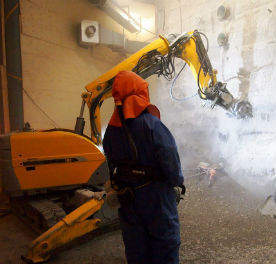 In 2003 Danish Decommissioning (DD) was established as a separate organisation under the Ministry of Science, Technology and Innovation with two main tasks:

The time frame for the decommissioning was 11-20 years from 2003, so all the nuclear facilities must be decommissioned and the buildings and land released for unrestricted use by the end of 2023. The estimated expenditure is about 1 billion DKK at 2003 prices.

In 2013 the Risø peninsula had six nuclear facilities to be decommissioned, including three research reactors. They were:

The decommissioning work is performed on the basis of International Atomic Energy Agency recommendations. In addition, we participate in several international working groups.

Before a decommissioning project can start an overall project description, based on previous planning and including an options analysis for critical steps, must be approved by the nuclear authorities in Denmark. When decommissioning and clearance measurements have been completed a project report and a clearance report are prepared for the nuclear authorities to approve. Afterwards the buildings and land are released for unrestricted use.

Two decommissioning projects are under way: DR 3 and the hot cells.

DR 3 (Danish reactor 3) was a 10MWt reactor of the PLUTO type (English origin). It was in operation in 1960-2000, used for materials testing, production of isotopes and silicon doping.

The DR 3 decommissioning project has been a fill-in task while decommissioning DR 1 and DR 2. Work started full time in 2012 when the heavy water room items were removed and the reactor top cleared to the master plane.

Decommissioning was divided into internals dismantling and demolishing the outer parts of the reactor (mainly concrete).

The outer parts of the reactor include the inner and outer steel tanks, lead and biological shielding and the heavy water room (see diagram).

The methods selected for the dismantling of the internals were based on an overall assessment that allows auxiliary equipment to be used during the work. Three major pieces of equipment are being used: a movable top shield, a packing hut, and a manipulator box.

While cutting the DR 3 internals, low pressure is maintained in the reactor pit by constant suction through an absolute filter to the active ventilation system, so no radioactive dust or gases are released into the reactor hall.

This provides a closed and controlled area for working in the reactor pit and allows the containers to be packed directly without having to repack them later.

In preparation for dismantling of the internals, the upper part of the reactor top was removed down to the master plane level. This is the upper 70cm of the reactor block, including the top plate and the top ring, storage facilities and some other structures. The reactor block itself measures approximately 6 x 6 x 6m.

From the master plane level the top shield plug and supporting ring were accessible. In May 2014 the plug was removed and replaced by a new movable top shield for the open reactor pit.

The project engineers at Danish Decommissioning designed a movable shield to replace the top plug and it was developed and constructed in cooperation with the Danish company Bladt Industries.

The moveable shield was moved to the side and a saw mounted on a shielding plate was lowered into the reactor pit. The cut was made just beneath the steel shroud on the outside of the RAT. After the saw was removed the shielding plate was bolted to the top of the supporting ring. This plate was then used to lift out the cut off section.

In October 2014 Mammoet lifted the shield ring in exactly the same way and with the same equipment used during the plug lift. The lift started at 7:00 and by 16:00 the TSR was parked in the intermediate storage facility in its Jumbo container in front of the TSP.

The moveable shield is being equipped with a packing room and a manipulator box before dismantling the remaining internals (the rest of RAT, graphite reflector and cast lead layer) later this year.

The packing hut covers the large circular hole in the shield. It acts as containment so low pressure in the reactor pit can be maintained during the work.

Packing of the steel waste containers now takes place in a closed and controlled area and containers can be safely left in the packing hut until the next working day. Afterwards the containers will be transported to the intermediate storage facility.

Once the manipulator arm is installed, we will be ready to remove the rest of the RAT and the graphite reflector.

The outer parts
The result of the options analysis for the biological shield was a combination of two methods. A wall saw will be used to cut the Baryte concrete into blocks for sorting by material. For the shot concrete (containing steel balls) a Brokk equipped with a scabbler turned out to be the most efficient tool.

The steel tanks with lead will also be cut with the wall saw, using a different type of blade. The approach will be top-down and outside-in, starting with a layer of concrete and the steel tank. The hole in the middle of the steel tank will be shielded.

This project has progressed very well and to schedule, with no major surprises. Good cooperation with external suppliers means we have been able to translate our ideas regarding functionality, equipment and solutions to something that works. Detailed work plans for our own staff and training have helped avoid undesirable incidents.

The work is planned to be finished in 2017 followed by clearance measurements, final report and approval by the nuclear authorities. The release of the buildings and land for unrestricted use is expected in 2018.

The hot-cell facility at Risø consists of six concrete cells which were used mainly for destructive post irradiation examination and packaging of medical sources. The facility was commissioned in 1964 and in operation until 1989.

The current decommissioning work started in 2008. The area surrounding the cells were evacuated but other building areas remain in use. Having non-nuclear workers so close to the hot cells has made decommissioning work very difficult because of the limited space and the restrictions on dose rates. European Union tendering rules have also delayed the project. But preparatory work has been carried out. Access to the cell front was established and the outer areas were cleared. A storage facility was cleaned and a conveyor channel was removed from the cells. Various camera inspections were carried out, including an inspection with a gamma camera. Some hot spots were removed from the cells using a suction hose through the plugholes in the cell front. There was a short entry into the least contaminated cell, but the other cells remain untouched.

A new approach
In mid-2012 a new team and a new strategy for the hot-cell project was chosen. It was clear that the previous approach was unsuitable. The project was put back into planning and an options analysis for remote cleaning of the cells was carried out. As a result, a method for reducing the gamma dose rate before manual entry to the cells was chosen: initial remote blasting with corundum through plugholes in the cell fronts.

Two mechanical arms have been constructed, one for remote blasting with corundum and one for extraction. These arms are now undergoing tests and fine-tuning before use.

The main challenge has been the limited space available in the plugholes, which have a diameter of 75mm. This puts some limitations on the bending radius of the blasting hose, which must be flexible to be able to blast all surfaces.

Furthermore, the arms have to be operated remotely and at long distance, and are 3m up in height and just above the floor. We have constructed some trolleys to move the arms around in front of the cells and will use a crane to position them. As well as the two main arms there will be camera and lighting arms.

The mechanical arm will be inserted in a lower plughole and positioned to blast the floor or the wall behind. It can be turned 360° to reach all surfaces.

We also decided to rebuild the ventilation system, which requires more space, so it will be necessary to vacate some offices in the building.
In mid-July these areas will be vacated and DD will be able to use this additional space for decommissioning. Then the rebuilding of the ventilation system will start and afterwards the cleaning of the cells will begin – hopefully by the end of this year or early 2016. Removal of the interior from the cells, including the doors and shutters is scheduled for 2016-17. Cleaning the cells for clearance and decommissioning of the remaining building is expected in 2017-2019.

There remain several difficulties in the hot cell project. Non-nuclear workers are all around us in the same building and we have very limited space available for the decommissioning task. It also complicates things that we cannot enter the cells, so the extent of the task cannot be determined at the moment.

However, with the new approach, good progress has been made so far. When we get more space, we are confident that this decommissioning project will be carried out successfully.