After five years of planning, and the clearing of several major hurdles, the 870 MWe Enecogen combined cycle facility is now finally under construction. With an expected efficiency over 59% and less than 10 ppm NOx, it will be one of Europe’s cleanest fossil fired plants, but also able to cope with fast cycling operation. 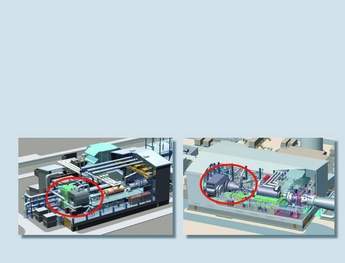 Even in bleak economic conditions there are still those brave enough to place orders for large fossil fired power plants. One example is Enecogen, a 50:50 joint venture of utilities Eneco and Dong Energy, which in April placed a turnkey EPC + LTM (long term maintenance) contract, valued at just under 700 million euro, with Siemens for a 2 x 435 MWe combined cycle plant to be built in the Europoort region of Rotterdam. The plant has a 31 month construction schedule, with commercial operation scheduled for late 2011.

This contract signing marked the end of a long and difficult project gestation period, which goes back to 2005. An initial source of delay was getting a grid connection, then there was the problem of an overstretched EPC market. Next was the small matter of a global financial crisis and unavailability of funds. Finally, in early 2009, Eneco’s original joint venture partner, International Power, decided to sell its 45% stake in the project, as it then stood, for 12 million euro. According to International Power’s May 2009 Interim Management Statement: “We elected to sell our stake after Eneco…took the strategic decision to reduce the capacity they were willing to purchase from the project by 50%.”

However Eneco (which preferred to work with a partner as it was the company’s first CCGT development project) was able to find another joint venture participant, Dong Energy. Dong bought the International Power stake and invested DKK 2.5 billion, allowing signing of the contract with Siemens to go ahead on 23 April, with work on site commencing on 26 May.

This marked the culmination of nearly two years of detailed development and negotiation carried out by Siemens with its customer Enecogen.

The resulting plant, to be fuelled on natural gas/LNG, will set a new benchmark for emissions. “With NOx of less than 10 ppm and a plant efficiency of more than 59% the two gas-fired units will be the most environmentally friendly recently built commercially in Europe,” says Lothar Balling, CEO of Energy Solution Business Europe, Siemens Fossil Division.

This is a particularly important consideration for Rotterdam-headquartered Eneco (owned by 61 Dutch municipalities), which has been recognised by none other than Greenpeace two years in a row as the “cleanest energy producer in the Netherlands.” Eneco’s basic strategy is to invest in the renewables, wind, solar and biomass, but it sees high-efficiency gas plants as a crucial part of the sustainable mix, “in order to be able to meet the demand of our customers in the most sustainable manner and under any conditions.” As Kees-Jan Rameau, Member of the Board of Management, Eneco Holding NV, puts it, “Eneco is…investing in highly flexible gas-fired power plants and gas storage to balance our fast growing, more volatile wind power production.” With the addition of Enecogen, Eneco will have about 1500 MWe of flexible gas fired capacity in its fleet, easily able to accommodate fluctuations in the output from the company’s wind turbines, currently totalling about 800 MW. The company’s long term goal is to move to “entirely sustainable production” but it sees “gas as the fuel with the least environmental impact during the transition period.”

Dong (owned by the Danish government) has also very ambitious goals for decarbonising its power generation portfolio in the medium to long term.

The Enecogen combined cycle plant will consist of two single shaft trains of the SCC5-4000F 1S type, a configuration that supports high operational flexibility, short start up times and high ramp rates – key requirements if a plant is to be competitive in prevailing power market conditions.

Each train has one SGT5-4000F gas turbine, one SST5-5000 steam turbine (‘KN’ type with double flow, 2 x 12.5 m2 LP exit area) and one hydrogen-cooled generator, arranged on a single shaft with SSS clutch and generator installed between the gas turbine and the steam turbine, the clutch being located between the generator and steam turbine. This is a well proven arrangement posing minimum technology risk. Since the introduction of the concept in 1994 (at Kings Lynn, UK), almost 80 of these single shaft trains have been sold worldwide, Siemens reports, with about 45 units in operation and a further 35 or so units under construction. Recent single shaft orders include Severn Power in the UK (also recently taken over by Dong Energy), Timelkam and Mellach in Austria, Sloecentrale in the Netherlands, Pego in Portugal, Gönyü in Hungary, Malzenice in Slovakia and further trains in Russia.

Enecogen will employ drum type HRSGs (to be supplied by NEM) instead of Benson type units.

Thanks to its port location it is able to employ direct cooling, contributing to the very high efficiency.

There is a possibility that heat might be supplied to the nearby LNG facility at some stage in the future (perhaps using cooling water downstream of the turbine condenser).

Selective catalytic reduction will be employed to achieve low NOx. Strictly speaking the national regulatory limit for such a plant in Holland is 25 g NOx/GJ. But in some industrial areas, such as Rotterdam, high NOx is an issue at the local level and Enecogen will be doing its bit by aiming for 17 g NOx/GJ, ie well below the regulatory requirement.

Carbon dioxide emissions from Enecogen will be less than 345 g/kWh. But looking ahead to a time when even combined cycle plants might have to be equipped with carbon capture, the plant has had to be designed to be “carbon capture ready”, although at this stage in the development of CCS technology this essentially amounts to leaving adequate space around the plant.

One proposal considered was cryogenic capture, ie cooling of the flue gases down to minus 130°C, making use of synergies with the LNG facility, where low temperatures (down to minus 162°C) are also used. But this was found to be too expensive.

Under the Rotterdam Climate Initiative Rotterdam has aspirations to become the “CO2 hub of Europe” and there are plans to connect major carbon dioxide emitters in the region to a CO2 network and to dispose of the gas to depleted gas fields, one offshore (Q8) and one onshore (Barendrecht). Interestingly there is already experience of bulk CO2 transport with a commercially operating 200 km long carbon dioxide pipeline passing through the area, taking carbon dioxide (400 000 t/y) from the Shell refinery to greenhouses north of the industrial area.

So Rotterdam would seem to be a good place to be for dealing with carbon capture and storage, should that be required of CCGT plants in the future.