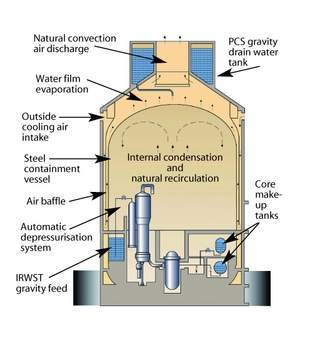 The AP1000: China is lighting the way

The comprehensive agreements signed in July came five months after the signing of framework accords that confirmed the basic requirements and obligations of all parties involved. As a result of those earlier agreements, preliminary design, engineering and long-lead procurement work was already underway.

SNPTC announced in December 2006 that it had selected the Westinghouse consortium and the AP1000 technology. Original bids for the four plants were submitted by Westinghouse and others competing for the project in February 2005.

The four plants are to be constructed in pairs at the Sanmen (Zhejiang) and Haiyang (Shandong) sites. Construction is expected to begin in 2009, with the first plant becoming operational in late 2013. The remaining three plants are expected to come on line in 2014 and 2015.

Under a subcontract with Westinghouse, Doosan of Korea (which is very much involved with the heavy components for that country’s Generation III offering, the APR1400, see pp 15-16) will supply reactor vessels, steam generators and integrated head assemblies forthe four Chinese AP1000 reactors.

The original plan had been to place two of the AP1000 units at the CGNPC/CGNPG Yangjiang site (Dongping town, Western Guangdong) rather than Haiyang. But the Yangjiang site, where reclamation work is already underway, now appears to be earmarked for four CPR1000 units, which are Chinese versions of the Framatome/Areva supplied Daya Bay/Ling Ao pressurised water reactors. It had been thought that two Areva-designed 1650 MWe EPRs were to be built at Yangjiang, but it now appears that these have been moved to Taishan (Guangdong). At the time of writing, however, no contracts had been signed for these EPRs.

The AP1000 (described in more detail in MPS, August 2003, pp 49-52) features passive safety systems to a greater extent than any other commercially available power reactor. In particular passive systems are used for core cooling, containment isolation and containment cooling, and maintenance of main control room emergency habitability. The passive systems are sufficient to automatically establish and maintain core cooling and containment integrity indefinitely following design basis events, with no operator action and no on-site or off-site power AC power sources.

Westinghouse describes the AP1000 as “the safest, most advanced, yet proven nuclear power plant currently available in the worldwide marketplace.” The core damage frequency is put at 5×10-7 (events per year).

It is also highly modularised in deign, facilitating rapid construction and high quality, and, according to Westinghouse, uses less concrete and steel and fewer components and systems than competing designs – meaning there is less to install, inspect and maintain.

They do not require the large network of safety support systems needed in typical nuclear plants, such as AC power, HVAC, cooling water systems and seismic buildings to house these components. Simplification of plant systems, combined with increased plant operating margins, reduces the actions required by the operator. The AP1000 also has 50% fewer valves, 83% less piping, 87% less control cable, 35% fewer pumps and 50% less seismic building volume than a conventional plant of similar installed capacity. These reductions in equipment and bulk quantities lead to major savings in plant costs and construction schedules.

The two-loop, 1090 MWe, plant retains the same basic design of the earlier AP600. Changes to the design to increase the electrical output have been minimised to allow the direct application of most of the existing design engineering already completed for the AP600. Examples of design features that remain unchanged include the nuclear island footprint and the core diameter.

Major component changes incorporated into the AP1000 design include a taller reactor vessel, larger steam generators (Delta-125), a larger pressuriser and slightly taller, canned, reactor coolant pumps with higher reactor coolant flows. The designs for these reactor components are based on components that are used in operating PWRs or have been developed and tested for new PWRs, says Westinghouse. Performance of the passive safety features has been selectively increased, however, these changes have been accomplished with small changes to the AP600 plant design.

The AP1000 fuel design is based on the 17×17 XL (14 foot) design used successfully at plants in the US and Europe. As with AP600, studies have shown that AP1000 can operate with a full core loading of mixed oxide fuel.

The AP1000 has received design certification from the US Nuclear Regulatory Commission and has been selected as the preferred technology for a dozen proposed plants being considered for construction over the next 10 to 12 years.

In May Westinghouse formally submitted to the NRC an application to revise the AP1000 certified design.

The company says revision 16 of the AP1000 Design Control Document (DCD) includes modifications that will “aid in reducing the cost, schedule and risks” for US utilities that plan to apply for combined construction and operating license (COL) applications with the NRC later this year. In addition, the company says, the revision will contribute to increased standardisation of the AP1000, making the NRC’s review of AP1000 combined COL applications more efficient.

“The revision includes design changes to the AP1000 requested by our customers and developed by Westinghouse as part of design finalisation,” said Ed Cummins, Westinghouse vice president of regulatory affairs and standardisation.

Revision 16 of the AP1000 DCD also incorporates measures to enhance security and aircraft crash resistance, and addresses around 40% of the 166 COL information items that were included in the original AP1000 Design Certification, issued by the NRC in December 2005. The remaining COL information items, mostly related to site-specific issues, will be addressed by utilities when submitting COL applications to the NRC, says Westinghouse.

The AP1000 is also one of four reactor designs recently submitted to the UK’s Nuclear Installations Inspectorate to be considered in its new generic design assessment process, the others being Areva’s EPR, GE’s ESBWR and AECL’s ACR-1000.

“Entry into the UK market by Westinghouse has the support of UK utilities, including E.On,” says the company.