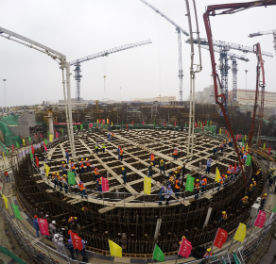 The containment dome of unit 2 of the Haiyang nuclear plant in Shandong province was been lifted into place, general contractor State Nuclear Power Technology Corporation (SNPTC) said. Haiyang 2 is one of four Westinghouse AP1000 units being built in China, two at Haiyang at two at Sanmen in Zhejiang province.

Last month the cover of the reactor pressure vessel was lifted into the containment building at Haiyang 2. SNPTC said construction of the main structure of the reactor building is now complete, with all large modules and equipment installed. The final module to be installed will be the containment water tank – a major part of the AP1000’s safety systems.

Construction of the Haiyang AP1000s is being managed by Shandong Nuclear Power Company, in collaboration with SNPTC and China Nuclear Energy Construction Corp. Pressure testing of the secondary circuit’s steam generators was completed at Haiyang 1. All four Chinese AP1000s are scheduled to be in operation by 2016.

At the Tianwan nuclear plant in Jiangsu province, the pressuriser was lifted into place at unit 3 unit, investment company China Nuclear Industry 23 International Corporation (CNI23) said. The 190-tonne pressuriser is the last piece of large equipment which needed to be installed in the nuclear island of the unit. There are two commercially operational units and two under construction at the Tianwan site. All units are of the Russian VVER-1000 design.

China General Nuclear (CGN) has confirmed that units 5&6 of its Ningde plant will have Hualong One reactors. Hualong One, a 1000 megawatt PWR, is the first Generation III reactor design for which China has owned all intellectual property rights. It is a combination of China National Nuclear Corporation’s (CNNC’s) ACP1000 and CGN’s ACPR1000+ designs. CGN expects to pour first concrete for Ningde 5 in the first half of 2016 for start up in 2021. Unit 6 will follow a year later.

In May 2015 construction of the first Hualong One unit began at the Fuqing nuclear plant in Fujian province. In December, the National Energy Administration approved use of the Hualong One design for Fangchenggang 3&4 in Guangxi, southern China.

Meanwhile, Fuqing 2, a 1087MWe CPR1000 PWR, achieved a sustained chain reaction for the first time and is expected to enter commercial operation later this year, CNNC announced. The Fuqing plant will host six Chinese-designed PWRs. Fuqing 1 started up in July 2014, was connected to the grid the following month and entered commercial operation in November. Ground was broken in June 2009 for Fuqing unit 3&4, which will also feature CPR1000 reactors. Fuqing units 1&2 have been built with a localization rate of some 75%, while units 3&4 will have a localization rate at least 80%. The State Council approved construction of units 5&6 in mid-April, both with Hualong One reactors.

Finally, the first steam generator has been installed at unit 4 of the Yangjiang nuclear plant in Guangdong province, CNI23 said. The Yangjiang plant has one CPR1000 unit in commercial operation and a second was connected to the grid in March. There are four units under construction – two CPR1000s and two ACPR1000s.

Earlier, China officially launched the State Power Investment Corporation (SPI), formed through the merger of nuclear operator China Power Investment Corporation (CPI) and general contractor SNPTC. Plans for the merger were submitted to the State-owned Assets Supervision and Administration Commission (SASAC) for approval in July 2014 and were approved by the State Council in May.

The move is part of a broader restructuring in preparation for China’s entry into the international nuclear export market. SNPTC was set up in 2004 to take charge of technology selection for new plants bid from overseas. The company was directly under China’s State Council and closely connected with it, being owned 70% by SASAC and with 10% of shares owned by each of CNNC, CPI and CGN. SPI chairman Wang Binghua, former chairman of SNPTC said SPI, CNNC and CGN will enjoy strategic cooperation and healthy competition.

July saw a new research contract signed between the UK’s National Nuclear Laboratory and CNNC subsidiary China Nuclear Power Engineering Company Limited (CNPE). The research will cover various aspects of reactor design, including consideration of environmental impact, materials selection and the corrosion properties of relevant materials during use in reactor systems. The contract is set to boost moves to introduce Chinese reactor technology to the UK market, according to CNPE deputy general manager Hong Jiang.

Also in July, Iran announced that China would build two nuclear power units for Iran on the Makran coast neighboring the Gulf of Oman.