A carbon dioxide capture process using chilled ammonia looks like a promising way of reducing the efficiency penalty normally associated with post combustion capture technologies and achieving future overall costs comparable with IGCC plus capture. A pilot plant is planned, with start up scheduled for next year. 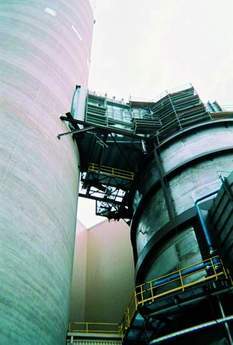 In the not too distant future, provision for carbon dioxide capture and storage (CCS) is likely to be required for new coal fired power plants in many parts of the world, and a number of projects with CCS, based on both IGCC and high-efficiency advanced supercritical units, are at the planning stage. But what is to be done about the large population of existing pulverised coal (PC) fired power plants, and those currently under construction or close to the start of construction – planned before carbon capture was quite so high on the agenda as it is now? They can’t simply be shut down and abandoned. Indeed, on some scenarios it has been estimated that for stabilisation of atmospheric carbon dioxide levels at 550 ppm, around 1100 GWe of coal fired capacity may need to be operating with CCS by 2050. As Bob Hilton, business development director, Alstom Environmental Control Systems, puts it, “Saving the existing coal fleet is key – we must be able to retrofit CO2 capture.”

Modifying the combustion process so that combustion takes place in oxygen, or, more likely, a mixture of oxygen and recycled flue gas, is a promising option, considered to be potentially backfittable, although requiring burner modification and installation of equipment for oxygen separation (which, with current technologies, is energy intensive).

Perhaps more readily backfittable (assuming there is somewhere to dispose of the carbon dioxide) are post combustion technologies, in which the carbon dioxide is scrubbed from the flue gas. Amine scrubbing is a well established capture technology and has been employed in refineries and at coal fired power plants to produce food grade carbon dioxide, eg for fizzy drinks and for freezing chickens. But it comes with a large efficiency penalty, principally because of the energy needed to provide steam for regeneration of the amines.

A number of projects are now underway that are aiming to reduce the energy requirements and the costs of post combustion scrubbing technologies, notably a series of tests at the Esbjerg coal fired plant in Denmark being conducted as part of the EU sponsored Castor programme.

There is certainly considerable scope for improving amine based technology and optimising it for power generation applications, but energy requirements and costs remain a challenge. It is for this reason that Alstom has recently emabarked on a project to build a 5 MW chilled ammonia capture pilot plant in the USA. The project is being carried out in collaboration with the Electric Power Research Institute (EPRI) and We Energies, whose executive vice president, Rick Kuester, recently described the development of cost-effective carbon dioxide capture technology as “one of the most important environmental challenges facing the utility industry in the 21st century.”

The chilled ammonia process has the potential to dramatically reduce the energy required to capture carbon dioxide and isolate it in a highly concentrated, high pressure form. In laboratory testing sponsored by Alstom, EPRI, Statoil and others, the process has demonstrated the potential to capture over 90% of CO2 at a cost that is estimated to be far less than for other carbon capture technologies. The chilled ammonia process involves the absorption of CO2 by ammonium carbonate to form ammonium bicarbonate:

Moderately raising the temperature in a regenerator releases the captured CO2. Thus the chilled ammonia process has exactly what one is looking for in a capture concept: effective capture coupled with relatively easy (ie low energy) release.

The chilled ammonia process has a high CO2 absorption capacity and consumes about 50% of the energy employed for the MEA process.

Ammonia is a relatively low cost reagent (around 200-250 $/t), but in addition there appears to be no degradation during absorption/regeneration and the process shows tolerance to oxygen and contaminants in flue gas. The carbon dioxide absorption process occurs at low temperature and the cooling of the flue gas to 0-10°C minimises ammonia losses, condenses out H2O and residual contaminants and reduces flue gas volumes.

High pressure regeneration at > 120°C creates a carbon dioxide stream with low moisture and low ammonia concentrations, with minimal gaseous ammonia release. Because the carbon dioxide needs to be compressed to around 1200-1500 psi (100-110 bar) for sequestration (most likely to be underground, in view of the large geological storage potential currently being identified, including in the USA) high pressure regeneration helps minimise the energy penalty.

The $10 million pilot system will capture CO2 from a portion (1% or less) of boiler flue gas at the We Energies Pleasant Prairie coal fired power plant in Kenosha, Wisconsin, USA. Construction of the pilot plant is due to start in early 2007, with commissioning scheduled for mid-2007. The plan is to operate the pilot plant for at least one year. EPRI will conduct an extensive engineering/environmental performance and cost evaluation during this operation phase and develop technology and economic analyses in support of applying the carbon capture process on a commercial scale, primarily to larger, coal-burning power plants. The findings from the pilot project are expected to be published in 2008. EPRI vice president of generation, Chris Larsen, says that “evaluating and developing technology for economical post-combustion CO2 capture is critical to ensure that we keep coal as a viable electricity generation option” and noted that “nineteen other utilities, which represent a large portion of the coal-burning utilities in the United States, have committed to support this project and we hope the results from the analysis will encourage additional participation.”

Beyond the capture pilot project, demonstration projects are envisaged, perhaps treating the equivalent of 30 MW of exhaust slip stream. Two sites might be developed, one coal and the other gas (combined with gas turbine development).

The hope is that the project will help to dramatically reduce the cost of removing carbon dioxide from pulverised coal power plants and bring overall costs into line with those for an IGCC plant with capture. It is estimated that the chilled ammonia process can reduce the costs of carbon dioxide capture to less than 20 $/t. It also employs relatively well known and proven technologies, chillers for example, say its proponents and has the potential to be more compact than some of the competing technologies, amine based systems, for example – another considerable advantage when it comes to ease of retrofit.