CCS for energy-from-waste: Aker has the solutions

At the end of April 2016 Aker Solutions will come to the end of a world- first test programme investigating the feasibility of capturing carbon dioxide emissions from a waste-to-energy facility. Since January this year Aker Solutions’ mobile carbon capture test unit (MTU) has been in operation at the Klemetsrud waste- to-energy plant, owned and operated by the city of Oslo, Norway. The project is funded by Gassnova, the Norwegian state enterprise that supports the development and demonstration of technologies to capture carbon dioxide. 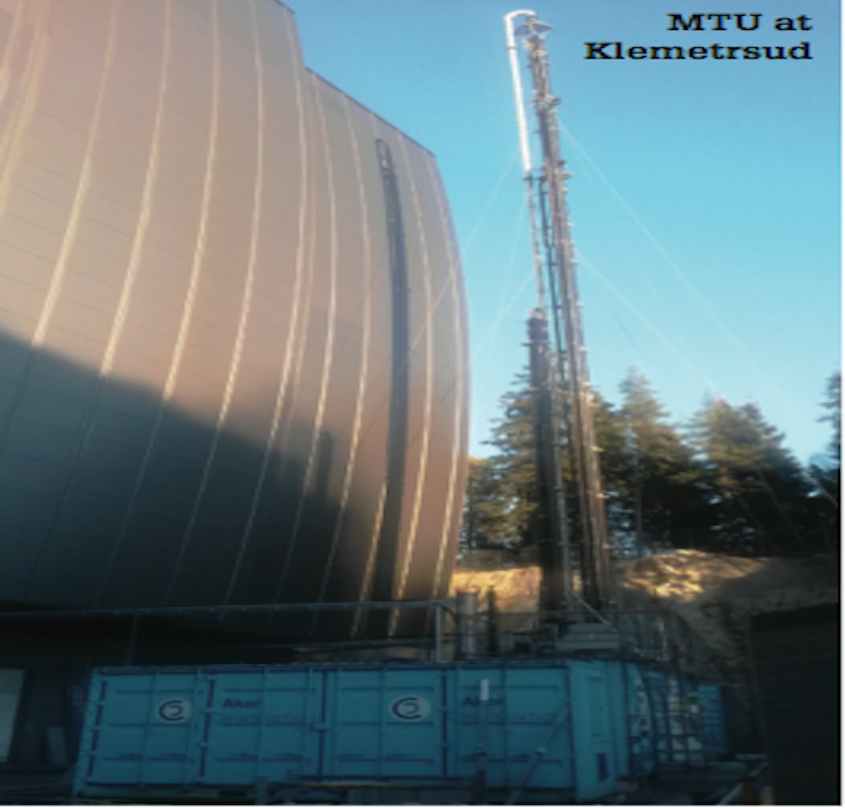 Informed by data coming from the Klemetsrud trials, Aker Solutions is also developing a design concept and feasibility study for a full scale carbon capture facility to be installed at Klemetsrud, with particular emphasis on optimal integration with the power plant, minimising the energy penalty and making best use of space.

Klemetsrud is Norway’s largest waste- to-energy facility, with the capacity to incinerate 310 000 t/y of waste, and supply 175 GWh of electricity plus 750 GWh of district heating per year.

The full scale CCS facility would capture about 90% of the 300 000 t of carbon dioxide emitted by the waste-to-energy plant annually and is one of three large scale Norwegian CCS projects undergoing Gassnova-supported feasibility studies, the others being at Norcem’s Brevik cement factory (where the Aker Solutions mobile test unit has also been used for trials, just prior to the Klemtsrud test programme) and at Yara’s Porsgunn ammonia plant.

The purpose of the feasibility studies, which will include a cost estimate for construction and operation with an uncertainty range of plus or minus 40%, is to "identify at least one technically and financially feasible CCS chain", says Gassnova, for implementation by 2020.

The Klemetsrud trials will also be a key element in qualifying Aker Solutions’ amine-based CO2 capture technology for commercial application at waste-to-energy plants worldwide. There are about 450 such plants in operation in Europe and about 700 globally, and Aker Solutions sees this as an interesting potential market for CCS, with the number of such facilities likely to increase as pressures to cease landfill grow.

One driver for CCS in this sector is that the waste-to-energy industry sees itself as being in the recycling business, so is keen to find ways of capturing and storing, even using, the carbon dioxide it produces. "They don’t like solving one waste problem and creating another", says Oscar Graff, head of CCS at Aker Solutions.

Once recyclable material has been removed, about 60% of the feed going into the Klemetsrud incinerator is biomass, so another potential attraction of adding CCS is that it could make such a plant carbon negative.

Aker Solutions also sees renewed vigour in CCS activities in the wake of COP21 in Paris.

The flue gas cleaning system at Klemetsrud, which can be considered a state of the art waste treatment facility, comprises electrostatic precipitators, four stage wet scrubbing and selective catalytic reduction. The mobile test unit takes cleaned flue gas from the pipe leading to the stack.

The flue gas is around 12% carbon dioxide by volume (compared with around 3.5% for a gas fired power plant, 13% for a coal fired plant and 20% for a cement factory). From a carbon capture point of view, in terms of energy penalty and compactness of equipment, the higher the CO2 content in the exhaust stream the better.

“The tests at Klemetsrud are providing verification of key operating parameters such as energy consumption, solvent degradation, losses and required solvent make-up", explains Oscar Graff. The trials to date are "looking positive", he notes, and have not revealed any particular challenges, despite the inevitably wide variability, ill- defined content and complexity of waste going into the incinerator – "from suitcases to restaurant food waste".

“I think we can fairly easily adapt our CCS technology for use in waste-to-energy applications", he says. Degradation of the amine scrubbing solvent by contaminants in the waste can make it corrosive and can also lead to foaming, for example, but "we haven’t seen any problems".

This is one reflection of the huge effort that Aker Solutions has put into improving the effectiveness and robustness of its amine based CCS solvents (about 50% water/50% amines). This has included research on no less than 90 "cocktails" in a recently concluded solvent R&D programme (SOLVit) that began in 2008, with the aim of reducing energy consumption, increasing capture rate and minimising degradation (with funders including CLIMIT/Gassnova and SINTEF as well as Aker Solutions).

Oscar Graff also points out that Aker Solutions’ experience with amine scrubbing goes back a couple of decades or so, when it was applied to gas "sweetening", and subsequently adapted for use on flue gases in CCS applications.

The Aker Solutions’ mobile test unit, a complete carbon capture test facility, albeit at small scale, has been in nearly continuous operation since 2008, at a variety of carbon dioxide emitting sites, listed in the table, right.