CCS after COP21: where do we go from here? 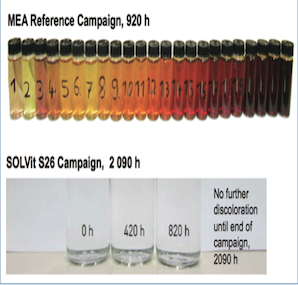 During the COP 21 meeting in Paris last December, 196 nations agreed to set new targets to address anthropogenic global warming, retaining the +2°C goal but setting a new stretching 1.5°C target. The meeting concluded that carbon capture and storage (CCS) is one of the required technologies in the tool box in order to meet these goals, and even carbon negative technologies may be required to reverse and stop global warming. And yet CCS development seems to have been struggling in recent years, particularly in Europe, with the UK government recently cancelling its CCS competition, for example.

Against this background, what is the way forwardandwhataretheprospectsforCCS post COP21? We asked Oscar Graff (Oscar. Graff@akersolutions.com), head of CCS within Aker Solutions, for his views.

When we started our CCS development programme back in 2005 the technology was regarded as not commercially available and not proven, says Graff. Today there are a handful of technology providers that can offer large scale solutions, which are tested and verified in pilot plants and ready for the market. The capture technology has been considerably improved over the years and the first large scale plants are well under way in Canada and in the USA. However, CCS developments in the EU have been slow and several projects have been cancelled.

Even though the capture technology has been considerably improved, delivering increased efficiency and reduced cost, there is still a considerable gap between the cost of CO emissions allowances (current EU quota 2 price is about 6 €/t) and the cost of CCS. In order to progress the first demonstration projects and to get on the learning curve, which will give further cost reduction, some initial financial support is required from either local or central authorities.

We see an increased interest in CCS after the Paris meeting. We are being contacted by a broad range of industries that emit CO2, such as cement, steel, fertiliser, aluminium, waste-to-energy (WtE) and fossil fuel power generation. They are all interested in the cost of large scale applications and the technology performance, the integration with existing plant and possible pilot testing, says Graff.

Our Mobile Test Unit (MTU) which is a complete carbon capture plant in miniature (capacity about 1000 Am3 flue gas/h), was commissioned and put in operation in 2008. The unit has been in continuous operation since then and at the same time we started our 88 month R&D programme, SOLVit, together with our partners. The MTU has been engaged in pioneering tests in Europe and the USA and has recently been testing at a cement factory (Norcem) and waste-to- energy plant (Klemetsrud, Oslo city), says Graff. (See MPS April 2016 for more on the Klemetsrud WtE project.)

In 2009, Aker Solutions was selected to design and deliver the amine plant at Technology Centre Mongstad (TCM),
Norway. TCM is the largest CCS test centre globally and comprises both an amine plant and a chilled ammonia plant. Flue gas is provided from two different sources. The centre was started up in 2012 and so far three technology providers have tested their amine technology there.

The parliament in Norway has adopted a plan for a national CCS demonstration project to be implemented by 2020. Last year the present government initiated carbon capture feasibility studies from three alternative CO2 emitters in Norway: Norcem, cement; Oslo city, WtE; and Yara, fertiliser. The captured carbon dioxide is to be liquefied and transported by ship to an offshore reservoir for permanent storage. Three alternative reservoirs are presently being evaluated by Statoil.

In 2008 we saw the need for a development and improvement programme, says Graff. We established the SOLVit R&D programme. The target for the programme was to develop new, improved solvents that could reduce energy demand by 50%, reduce capture costs and have minimum environmental impact.

The MTU was the final test station for these solvents and a second R&D test rig was established at Tiller in Trondheim in collaboration with SINTEF and the Technical University in Trondheim (NTNU). The following possible end users also participated in the programme: Statkraft; E.ON; ScottishPower; and EnBW. The programme was funded by Aker Solutions, Gassnova (the Norwegian state enterprise for initiating CCS developments) and the other partners. SOLVit, one of EU’s largest carbon capture R&D programmes, was concluded in January 2016. About 50 researchers have been involved in the programme.

Among the main findings is that the Advanced Carbon Capture (ACCTM) technology developed by Aker Solutions is ready and qualified for commercial scale application and that the energy efficiency has been improved by 35% compared with a standard amine solution (MEA). The recommended new solvent consists of an amine blend that is "green", ie, non-toxic, biodegradable and non-corrosive. This allows the use of cheaper steel materials.

The research showed this solvent to be very robust and the degradation due to thermal and chemical effects to be reduced by a factor of 10 compared to the reference amine. These improvements can be illustrated by liquid samples from tests at a coal fired power plant in Heilbronn, Germany, operated by EnBW, see Figure 1.

When amines degrade they lose the capture effect and the solvent becomes discoloured. The standard amine (MEA) was significantly darker after 920 operating hours. The new solvent, ACCTM S26, was tested under the same conditions and no visible change was seen after 2090 operating hours. This is a big achievement for our capture technology, says Graff. Less degradation means reduced emissions in treated flue gas and less liquid waste during operations; and the chemical consumption (amine make-up) is reduced accordingly.

During the SOLVit programme, second and third generation solvent systems were also evaluated and tested at pilot scale, including two-phase liquid systems. The main conclusions from these evaluations were that new generation solutions gave marginal improvements and at high risk. The partners could not identify any good candidates for further development. Key features of the SOLVit programme are summarised below.

TCM, Norway, can be regarded as the most advanced amine based carbon capture plant globally. Flue gas is provided from a refinery cracker (about 13% CO2 by volume) and a gas fired CHP plant (3.5% CO2).

The cracker gas is similar to the flue gas from a coal fired power station. The capacity of the capture plant is about 80 000 tons of CO2 per annum. The absorber column can have varying packing heights and two alternative desorber systems are installed. During the first two years of operation Aker Solutions carried out two campaigns with proprietary solvents from the SOLVit R&D programme and one joint campaign with the TCM owners (Gassnova, Statoil & Shell) on a standard MEA solvent. The MTU was operated in parallel with the industrial scale amine plant at TCM, see Figure 2. The scale-up from the MTU to TCM is about a factor of 50.

The results from these TCM tests verified the good match between the predicted performance based on initial MTU tests and CO2SIM simulations, and actual performance in the larger amine plant under the same operating conditions. The plant availability during the first test campaign at TCM was 93% without any standby equipment. The new solvent, S26, which was tested at TCM in one of the campaigns confirmed the robustness of the solvent, as demonstrated in the course of initial laboratory, Heilbronn and MTU tests.

In 2014 Aker Solutions started a 16 month MTU test at Norcem’s cement factory in Brevik, Norway. This large scale pilot test of carbon capture from a cement factory was the first of its kind globally, and the test gained international interest. The test results from Norcem were shared with the European Cement Research Academy (ECRA) and its membership of over 40 leading cement producers worldwide. Three alternative capture technologies were tested in parallel with the MTU, two membrane systems and one calcium carbonate system.

Figure 3 shows the Mobile Test Unit in operation at Norcem, part of the Heidelberg group. The total CO2 emissions from the entire cement industry are estimated to account for about 5-6% of anthropogenic emissions. The CO2 concentration in the flue gas at Norcem is about 20% by volume. About 2/3 of the CO2 volume is related to the released CO2 from the cement process (limestone); and the remaining part comes from the combustion and heating system. Due to the relatively high concentration of CO2, the capture plant will be more compact, will require less energy per ton of captured CO2 and both the investment cost and operating cost will be reduced accordingly.

Based on the initial tests of alternative technologies, Norcem selected the ACCTM technology from Aker Solutions for further development. The MTU test demonstrated excellent capture performance and formed the basis for further studies of a large scale capture plant at the cement factory in Brevik.

In co-operation with Norcem we investigated how we could best integrate a capture plant with the existing cement factory. This plant emits about 860 000 t of carbon dioxide per annum. By utilising the available waste heat in the flue gas we would be able to capture about 400 000 t of CO2 without any need for additional heat, notes Graff. This provided the design basis for the large scale capture plant and will reduce the operating cost of the capture plant significantly. A similar design approach could be applied to other industries and thereby make the capture plant more economic. At Norcem the captured CO2 will be liquefied and stored in interim vessels, before it is loaded on to ships for further transport.

Norcem is one of three candidates for the planned national CCS demo project in Norway, together with the Yara and Klemetsrud WtE projects.

Time to get going

Demonstration projects are also crucial in order to increase knowledge of CCS and to bring the costs further down. It is important to select the best candidates for carbon capture demo projects (low hanging fruit) and the best storage sites.

The deployment of CCS will depend on political leadership and it is important to get going now in order to reach the planned carbon dioxide emissions reductions by 2030, says Oscar Graff.