With environmental targets looming large, big business is redoubling its efforts to become carbon neutral. But as international organisations focus on ‘greening the grid’, how great a role will they play in future wind investments? Abi Millar investigates a growing trend. 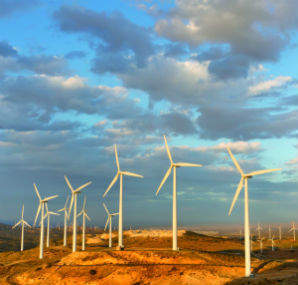 For a driver travelling between Aberdeen and Inverness, the Dummuies Wind Farm near Huntly would probably not merit a second glance. You don’t have to go far through this part of Scotland before encountering a turbine, the region being as notable for its tempestuous winds as it is for its natural beauty.

And yet if a driver were to pull over and investigate, he or she might be surprised. In 2011, the farm was purchased by furniture giant IKEA with a view to meeting its renewable energy targets. With seven 1.75MW Vestas turbines, it provides enough electricity to power five stores, or about 30% of the company’s total UK consumption.

"We want to have a positive impact on people and the planet – and this includes an aim to become energy independent by 2020," says Jamie Rusby of IKEA’s sustainability team. "The wind is a fantastic resource, and owning and operating wind farms brings us closer to our goal."

It’s a sentiment echoed by numerous other corporates. Apple makes savvy use of wind power, having recently filed a patent for a wind energy storage solution. Tesco has a number of wind installations, and Ford at Dagenham boasts on-site production in London. LEGO invested $500 million in a German wind farm; Michelin features two supersized turbines at its tyre factory in Dundee. The list is, if not endless, then certainly edifying.

"Sustainability has grown in importance for organisations large and small," says Jan Matthieson, senior manager of offshore wind at the Carbon Trust. "Companies are starting to appreciate that reducing carbon is also reducing cost, so they’re increasingly investing in new low-carbon technologies and opportunities, and becoming more aware of how to use this in their branding."

Until recently, the idea of a retailer-owned wind farm would have been something of a novelty. Corporates tended to channel their efforts into more traditional areas – improving their on-site infrastructure, for instance, or simply using less energy in their day-to-day operations. Only over the last
five to ten years has wind power begun to factor prominently in their sustainability strategies. Mackie’s Ice Cream in Scotland was an early pioneer, installing its first turbine in 2005 (‘Mackies’), with a second and third in 2007 (‘Ice’ and ‘Cream’). The company uses about 30% of the energy generated while exporting the rest to the grid – and, far from burying this titbit at the bottom of some corporate report, it goes so far as to use a turbine image on its packaging.

Here, we can discern a clear shift in attitudes: as the technology matures, wind power has become an attractive point of allegiance. Consumers and stakeholders – themselves environmentally aware – are actively seeking out companies whose concerns stretch beyond raw profit.

"At IKEA, we know that our customers care about sustainability and want us to take the lead on climate change," says Rusby. "Reducing our carbon impact is an important part of maintaining that trust."

Henrik Kuffner, CEO of WindMade, agrees. His company pioneered a consumer labelling system that allows corporates to express their commitment to wind energy. Members so far include the WWF, PwC and LEGO, all of which procure at least 25% of their overall energy consumption from wind power.

"Our clients want to communicate that they are doing something worthwhile," he says. "This is taken particularly seriously by larger companies, which have a broad range of customers. In the end, the objective is to ensure that as much as possible is invested in wind because we believe it is one of the most important resources for the future. We want it to become normal to consumers that companies are running on wind energy."

While normalising wind is a laudable objective, it would be disingenuous to suggest that the trend has its basis in the goodness of corporates’ hearts. They also have a clear economic incentive in that stirring demand increases supply and therefore lowers production costs. And it goes without saying that wind lacks the risks of an unstable commodity such as oil.

Perhaps most saliently, businesses are at the mercy of stringent carbon reduction targets, and, with little time left to conform, are feeling the heat. For EU member states, the major point of focus is the 2009 Renewable Energy Directive. It stipulates that, by 2020, they will need to derive a
certain proportion of their energy consumption from renewable sources: 23% for France, 27% for Germany and 15% for the UK. When you look at electricity alone, the figure is apt to be higher still.

Nor is this just about meeting a legal minimum. In the case of many multinationals, their impressive internal targets are a point of pride. Apple currently obtains 75% of its power from renewable sources, and its arch-rival Google has been carbon neutral since 2007. For a corporate of this size, there is scope to move beyond token gestures and make a real impact on the environment.

"We enter into transactions that we feel make a good business case for Google," says Gary Demasi, director of global infrastructure. "We’re agnostic in terms of the type of renewable energy, and we would evaluate all projects based on their financial and technical merit."

When it comes to wind, Google maintains a dual-pronged strategy. Firstly, it has entered into a number of power purchasing agreements (PPAs) across the world, most recently with a 72MW Swedish wind farm, which will supply its data centre in Finland.

While the wind energy harnessed does not serve the data centre directly, there are clear benefits to be garnered from ‘greening the grid’: the more renewables available within that grid, the more green electrons count towards its overall energy consumption. The company can also generate offsets that are retired against its carbon footprint.

On a separate note, Google has committed $1 billion to renewable energy projects, supporting the development of 2GW of new renewable energy. These investments don’t count directly towards its own carbon reduction efforts, but they certainly boost its green credentials.

"We do this because it’s the right thing to do for the world, and because it makes operational and financial sense for our business," explains Demasi. "We hope that our efforts demonstrate to other companies that renewable energy can be an integral part of running a successful,
global business."

Another corporate embracing wind, albeit indirectly, is Bloomberg. As part of a four-tier sustainability programme, the media company routinely counteracts its energy consumption with renewable energy certificates (RECs). Each certificate proves that 1MWh of electricity was generated from wind, enabling the company to cover 58% of its power consumption and acquire the WindMade label.

"Primarily, we have solar potential, based on where our offices are located and the markets in which we operate," says sustainability manager Lee Ballin. "But not all of our offices are conducive to on-site solar deployment, so we fill this void with RECs. Wind RECs are a high priority."

On the face of things, wind RECs are uneconomical, costing more money than they help bring in. That said, in the context of Bloomberg’s broader strategy, the risks are balanced out by the rewards. Viewing all activities through a prism of environmental, financial and cultural returns, the company is able to make some clever trade-offs.

So far, the strategy appears to be working; Bloomberg has achieved its initial carbon reduction target two years ahead of time. Compared with a 2007 baseline, it has shrunk its footprint by 50%. Meanwhile, IKEA is on course to be 70% renewable by 2017, and has committed to owning and operating 180MW of wind energy capacity across five countries.

The trajectory is clear: corporates are becoming ever more attuned to the ways in which wind can help their business. No longer simply paying lip service to sustainability, they are actively deriving their energy from renewable sources, and are seeking partners who do the same throughout the supply chain.

While this applies mainly to onshore projects, the smart money suggests that offshore will follow suit. As offshore wind becomes less challenging and more predictable, corporates are likely to grow more comfortable with this type of infrastructure investment – Matthieson, for one, believes it will be "the next big thing".

With all the business advantages wind energy entails, it’s easy to see why corporates of all stripes are latching on to this trend.

"Wind power ticks a lot of boxes," says Matthieson. "It’s a technology that’s here now and can be invested in. It can help companies meet their sustainability targets, do the right thing and make some money.

"They’ll probably benefit even more if they can do it directly themselves, on their own installation, but you don’t need to develop the project yourself to be part of the game."