Buried live for a thousand years 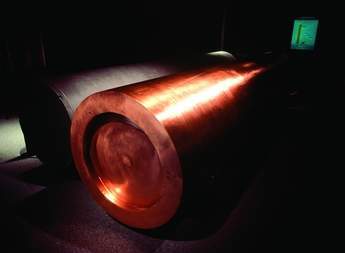 When Finland considered its options for nuclear waste disposal two decades ago it opted, perhaps unsurprisingly, for deep burial. The country, after all, sits on a hard rock shield that is more than 1400 million years old and one of the most stable in the world; more fanciful options like blasting fuel rods into space or dropping them into deep sea trenches seemed unnecessary.

Even with the best rock bed, not just anywhere will do and a considerable amount of work has been done to find the right place. After an extended site selection period lasting two decades, involving a countrywide geological survey and subsequent geotechnical investigation of half a dozen potential sites, Olkiluoto on the Baltic coast was chosen, an area conveniently close to two existing nuclear reactors and the site of a third, OL3, now under construction.

Deep in the rock here will eventually be created a comb like network of parallel tunnels. In each, small shafts will be spaced at intervals, each containing a copper flask of spent fuel rods and sealed in for a minimum 1000 years – probably much more – while they cool and their radioactivity dies down. When the storage is completely filled, a process expected to take decades, the entire site will be sealed. It has been designed to contain a maximum 6500 tonnes of spent fuel.

But finding a site is not enough, it has to be proven, and two years ago the Onkalo project began to investigate and document the site in detail. Alongside a programme of surface core drilling to depths of hundreds of metres into the rock, a 4km long squared spiral tunnel is under construction. This will culminate in the excavation 420m below ground of a series of chambers. These, and the spirals of the 4.5m high and 5.5m wide tunnel, will be connected to the surface via a 3m diameter shaft.

All this and possibly an extension of the spiral to 520 m is being done for research purposes, simply to prove the rock and assess its properties. The chambers will be used as laboratories, as rock core stores and as drilling points for probes inserted into the rock mass where the depository itself will be excavated. If the go ahead is given, the spaces will eventually be used for the operational processes of receiving and entombing the waste cylinders delivered through a widened shaft. But that will not start before 2020 when the first waste from its intermediate water tank storage is ready.

Meanwhile the tunnel excavation itself is also being used for research, to discover the best means of drilling and blasting safely and as a place to carry out the work of taking samples from the rock as the tunel descends.

“The task is to characterise the rock mass in detail” says Timo Niemitalo, site manager for the Posiva company which is carrying out the the extended investigation works. Posiva is a joint venture of Finnish power companies TVO and Fortum Power & Heat which are held responsible for disposal, a process monitored by the state radiation and nuclear safety organisation STUC.

The key task is to record the fine crack faults in the rock and investigate other factors that can affect its permeability. Water movement in the rock is the the major factor that has to be controlled; groundwater movement is the main mechanism by which nucleotides could be dispersed from the entombed waste if there were to be any leakage.

It is planned of course that there will not be. The disposal process involves a multi-level encapsulation of the waste beginning with its processing into a pelletised ceramic material which resists any dissolving action. The pellets are held in a steel frame inside a sealed high grade copper cylinder, chosen because natural deposits of metallic copper tens of thousands of years old have been found which have resisted degradation.

“We could also use gold” says Niemitalo “but there is no guarantee it would be left alone in the ground by people. But natural materials, with a proven record, are chosen in preference [to artificial ones].”

The cylinders will be stored in specially drilled holes along the tunnels, surrounded by a bentonite clay packing, another natural material. Bentonite expands on contact with water and therefore in due course will fill tightly the space around the cylinders.

“That will block any further movement of the groundwater” says Niemitalo. More bentonite mixed with aggregate will fill the tunnel above once all the cylinders are in position and the end will be sealed with a 3m thick concrete plug.

The exact method of storing the cylinders – they may also be laid horizontally along the inside of the tunnel within steel outer flasks and more bentonite – is yet to be decided. Research on the best method and also on how to weld closed the copper cylinders is going on in conjunction with the Swedish nuclear research facility SKB. Factors such as the effect of heat from the waste on the materials around are also to be considered.

At Onkalo the tunnelling itself is being investigated, including the basic drilling and blasting technology, to see what impact it will have on cracking in the surrounding rock and how to minimise it by careful choice of drill holes lengths, the amount and type of explosive used and so forth.

The tunnel walls are also extremely carefully inspected, with a detailed chart filled in for each 5m blasting round, of the various aspects of the rock, its hardness determined by Schmidt hammer test, the exact pattern of cracks, and the mineral constituency.

“We want to model the cracking especially to find any continuous cracking in which water could move” says Niemitalo. Each final disposal tunnel must be in rock with a 30m margin of rock without significant cracking. Such is the detailed information needed that Posiva recently decided to dispense with the contractors used for the initial 1 km or so of the tunnel and do the work itself directly.

“The important thing is to build up a detailed understanding of how we have done the tunnelling and contractors usually are here for only one year or so” explains Niemitalo. But the information is needed over as much as 100 years during which the the facility will be live.

The company has bought its own Tamrock three boom jumbo rig for the work, a modern computerised machine which logs the drilling rates and pressures, producing more potentially useful data. But all this is, as yet, preliminary work: much more detailed probing will be done from the chambers at the bottom. This will continue even as the facility is steadily created over the coming decades with the creation of probe holes to assess the state of the rock bed.

Plan of the repository tunnel complex. Schematic of the tunnel complex showing progress as at September 2006. Copper storage capsule.