Pingston hydroelectric power plant began operating in May 2003, after a challenging construction process 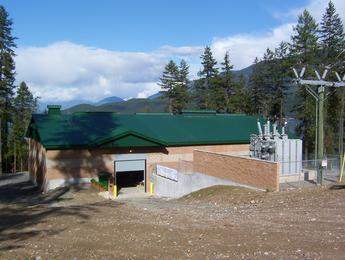 Located on the picturesque Pingston creek in British Columbia, Canada, the 45MW, US$69M Pingston hydroelectric project has been designed and constructed by Canadian Hydro Developers of Calgary, Alberta, in a 50:50 joint venture development with Brascan Power of Sault Saint Marie, Ontario.

The first stage of construction involved one crew at each end of the low-pressure upper tunnel, working around the clock to drive the tunnel at a 2% grade through 2km of rock from Pingston creek. At the same time, a third crew was driving a lower tunnel from a location 600m up-slope of the power house. At a point, deep inside the mountain, the two tunnels would meet, via a 450m shaft inclined at 70°, to form the conduit that would soon convey water at 6m3/sec to the horizontal Pelton turbines in the power house.

The lower, high-pressure tunnel is 1400m long, and contains a 1240m long penstock supported on steel saddles at 7.5m intervals. The transition from tunnel to pipe is accomplished by a 24m long concrete plug which encases a pipe section with 11 grout rings, each with 8 ports through which 3m long holes were drilled in a radial direction into the rock, and pressure grouted. At the tunnel portal, the liner pipe transitions to a slightly smaller buried penstock, which terminates at the penstock bifurcation adjacent to the power house. A cross-section view of the configuration would look somewhat like the letter ‘Z.’

During tunnel construction, contractors discovered that rock quality varied along the course. Securing the rock using bolts, spray-on shotcrete coating, or pipe liners created additional expenses. However, those conditions could only be discovered once tunnel construction began. The best geological studies can offer is an educated guess about a recommended course of action. In retrospect, it would have been more cost-effective to build the penstock into the slope and take the chance on potential slippage backed up with diligent monitoring.

While the tunnelling teams were busy boring their way through solid rock, other crews were building the power lines, penstock, power house, intake and headpond. By road, the intake is located 14km and 30 minutes from the power house. It includes a headpond to provide intake submergence, a 13m-high steel-core, rockfill dam, ogee style spillway, and intake building. The intake building is used to protect the intake structure during extreme winter conditions.

The intake includes back-flushing capability, which reverses the flow and washes debris downstream, eliminating the need for a trashrack cleaning system. The system allows ease of maintenance, but in retrospect, the expense could have been eliminated in favour of a simpler design. An 8kW micro-turbine (with diesel back-up) provides power to operate a battery system, lights, and the hydraulic system for the four gates. A PLC-based control panel provides the control and interface for radio-based communications to the power house.

As part of the Pingston project, rock reefs were installed to provide refuge and rearing habitat within the headpond in order to enhance the fish habitat in Pingston creek. Eight logjam structures were added upstream of the headpond, while a fish spawning channel with suitable flow, grade and gravel was constructed downstream.

Pingston began operations in May 2003, when it first produced 30MW of electricity into the BC power grid. The project was designed to allow the installation of a third turbine in 2004, which brought the total plant capacity to 45MW. Annual production of is approximately 180,000MWh, all of which is sold to BC Hydro under a long-term power purchase agreement.