Construction of the first phase of a new £110 million LLW disposal facility at Dounreay site in Scotland marks a major milestone for the site. By Charlie McVay 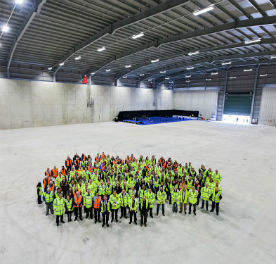 In May, the first two low-level waste (LLW) disposal vaults were handed over to Dounreay parent body organisation, Cavendish Dounreay Partnership. The project was one of the major milestones of the contract signed between CDP and the Nuclear Decommissioning Authority in 2012.

Management of LLW is an integral part of the decommissioning programme at Dounreay. Construction of the new disposal facility is a key element of the site’s solid LLW strategy, and fundamental to the success and efficient decommissioning of the site.

The project involves building of up to six shallow-buried, underground, engineered vaults, along with a grouting plant and administration facilities.

The new facility will be used for the disposal of up to 175,000 m3 of solid LLW expected to be generated during the clean- out and dismantling of the nuclear reactors, reprocessing plant and other radioactive facilities at Dounreay. This includes waste that will be retrieved from a series of historical low-level waste pits at the site.

LLW comprises more than 80% of the volume of all the radioactive waste to be managed during the closure of Dounreay, but contains less than 0.01% of the radioactivity.

A breakdown of the total LLW inventory for disposal in the new facility shows a dominance of metals (mostly steel), soil, concrete, plastics and paper. The waste will fall within the UK LLW category limit (>0.4 Bq/g total man-made radioactivity, equivalent to >0.0004 GBq/tonne, and not exceeding 4 GBq/ tonne of alpha or 12 GBq/tonne of beta/gamma activity).

It also includes so-called ‘demolition LLW’ (DLLW), consisting of lightly-contaminated decommissioning and demolition spoil such as concrete, brick, metals, stone, sand and soil with low radiological and non-radiological hazards (with radioactive content not exceeding 0.01 GBq/tonne of alpha or 0.40 GBq/tonne of beta/gamma activity). Up to two of the potential six vaults will be dedicated to DLLW.

Dounreay’s historic disposal capacity for LLW was exhausted by the mid-1990s. A regulatory safety audit in 1998 criticised the subsequent practice of above-ground storage as contrary to national policy. As a result, the then operator took a twin-track approach:

In 2005, Scottish Ministers directed the Scottish Environment Protection Agency (SEPA) to refuse the application for disposal at Drigg in Cumbria and encouraged the then-site operators to progress the BPEO.

Dounreay carried out extensive technical studies and consulted widely on the BPEO, leading to a planning application in 2006 for the construction of new disposal facilities adjacent to the site.

Planning approval was gained in 2009, following an application based on independent Environmental Impact Assessment, detailed site investigation work, design and safety studies, and extensive consultation. In January 2013, SEPA granted an authorisation under the Radioactive Substances Act 1993 to dispose of low-level waste in the facility.

The new LLW facilities are located at the northeast perimeter of the Dounreay licensed site; a location selected with a view to long- term safety considerations and the desire to minimise impacts on nearby residents from the construction and operation of the facilities.

The site is sufficiently distant from the sea to ensure no significant risk from coastal erosion or flooding, the layout is designed to avoid a major geological fault in the area, and the facilities have been located to minimise noise and visual intrusion for local residents. Further factors considered have included the occurrence of protected species, archaeological sites, and the need to minimise the overall footprint of Dounreay. Moreover, siting the facilities on the land at Dounreay avoids the need to transport LLW on public roads, and is consistent with the 2010 NDA strategy on management of LLW from the UK nuclear industry to protect the public and environment.

Phase one of the project, now complete, has consisted of the first two vaults, which will accommodate the minimum volume of predicted waste arising during the decommissioning programme, and ancillary plant. The contract for detailed design and construction of these was let in early 2011 to Graham Construction, the principal contractor. The other companies involved in the project are Gunns of Lybster, JGC Engineering and Technical Services Ltd, Galston.

First-phase construction began in November 2011. Groundwork preparations and deep excavation works required in the bedrock have involved the excavation of 278,212 m3 of rock, 51,073 m3 of subsoil, and 31,143 m3 of topsoil, with a stable, maintenance-free excavation face provided using inclined rock anchors and rockfall mesh.

Although pecking – breaking rock with a hydraulic jackhammer – was originally proposed for excavating the site, our positive experience of blasting was a valuable improvement during the course of the project.

With building work complete by February 2014, inactive commissioning of the site by Graham Construction followed, demonstrating the correct functioning of all plant and equipment before being used for radioactive waste. Meanwhile construction of the new grout plant began in summer 2013, along with its control room and admin building.

Following the official handover of the vaults to Cavendish Dounreay Partnership, a period of active commissioning (demonstrating that all relevant plant and equipment functions as required when using real waste packages) commences in summer 2014 before the facility starts operating from late summer/autumn 2014 for the first waste disposal, subject to regulatory and other approval.

The concrete vaults are designed to optimise the durability of the vault structure and delay ingress of water into the vaults for as long as practicable.

The concrete vault walls, floor slab and concrete roof slab, where applicable, are at least 0.5m thick, with a minimum gap between the vault wall and the excavation rockface of approximately three metres.

Two features of the design are key to the containment of the radioactive content within the vaults. First, the packaging, backfill and concrete structure of the LLW vaults restrict groundwater flow through the LLW, minimising the potential for radioactivity movement.

Secondly, the concrete alters the chemical conditions within the groundwater, effectively binding the radionuclides to the concrete, minimising the amount that leach out.

The LLW waste for disposal in the new facility is collected in LLW metal Half Height ISO freight containers (HHISO), approximately 6 m by 2.4 m by 1.3 m in size. The first LLW vault will accommodate a total of 1968 HHISO equivalents. Prior to disposal, cement-based grout will be used to remove voids in the containers and form a stable cemented block of waste. The grouting plant for this purpose is being constructed as part of the facilities. The plant operates on the same lines as the grouting plant at the UK LLW repository at Drigg in Cumbria.

Each half-height ISO container has approximately 200-250 compacted drums, or pucks. Grout is poured into the void space, at a rate of 10 m3/hour, via a port in the roof of the container and moved to a holding area where the grout is allowed to cure for 9-12 hours. There are between 800 and 900 half- height ISO containers in storage at Dounreay awaiting grouting. Active commissioning of the grouting plant is due to begin later this year.

In addition to the grouting plant, an ancillary plant at the site also includes a pumping system and control building to remove groundwater from around the vaults to allow them to be kept dry while they are being filled with waste. This is in addition to the administration building, and a water treatment area to remove suspended solids from the water being managed from around the site.

During operation the vaults have roofs to keep the waste dry, and the waste will be transported into the vaults down access ramps by tug and trailer. The LLW containers will be off-loaded and stacked by forklift or container handler and placed in two layers, each the equivalent of four HHISOs high. The first layer will be grouted to fill the gaps between the containers before the second layer is placed and grouted. As the LLW vault is progressively filled, low-level electrical supplies and ladders will be disconnected and raised. Once all the wastes have been placed, the gaps between adjacent containers and between the containers and the vault walls will be filled with cement grout.

The DLLW will be disposed of in large nylon bags. They will be off-loaded and placed in the vault by all-terrain forklift and placed without the use of grout, being backfilled with granular material such as sand or crushed rock. Along with waste compaction during the operational phase, this backfilling will help to minimise voids and stabilise the waste.

The first two vaults and ancillary plant have been developed at a cost of approximately £20 million, with the total cost of managing the LLW through the closure programme at Dounreay expected to be in the region of £110 million.

Next phases and closure

"Dounreay has outline planning permission for a total of six vaults"

The full extent of phase two will be confirmed as the site decommissioning progresses and waste volumes are updated. A phase three may be needed to cater for the LLW arising from the planned retrieval of waste in the existing disposal facility, the LLW pits. Dounreay has outline planning permission for a total of six vaults and, as a minimum, expects the need of one additional LLW vault.

Decisions about the development of further vaults will be taken as part of a review of the site closure programme now underway (expected to be completed in late 2014) to accommodate changes made by the NDA to its nuclear fuels strategy. This revision will determine any changes to the length of the programme and hence our forecast of waste arisings. The longer the programme takes, the greater the likely volume of LLW, even with rigorous application of the waste hierarchy.

Information obtained about the hydrogeology of the site will be of immense value for the construction of any future vaults. The amount of information needed during the course of preparation probably exceeded our initial expectations.

Once decommissioning of the Dounreay site is complete the LLW facilities will be backfilled with grout (creating a monolithic block) and closed.

Closure will involve construction of a concrete lid, and infilling of the gaps between the vault and the bedrock with graded rock backfill. The engineered cap will includea layer composed of large blocks of rock, which will reinstate the original land surface (the cap will be covered with soil and grassed over to merge with the surrounding landscape) and reduce both upward flow of groundwater and radionuclides, and protect against the risk of future human intrusion. The cap for the DLLW vaults, when full, will be of a somewhat different design to cater for a greater degree of settlement. The site will then be landscaped and placed under care and surveillance for up to 300 years, by which time over 95% of the radioactivity will have decayed. SEPA will continue to regulate the facilities over their operational lifetime, until such time as they are considered safe to be released from further regulatory control.