US-based company Robbins is helping to hydrate China’s arid Shanxi province in an ambitious water diversion project. Desiree Williams gives an update on construction at the Pinglu tunnel, which is set to be one of the world’s longest tunnels excavated with a single TBM 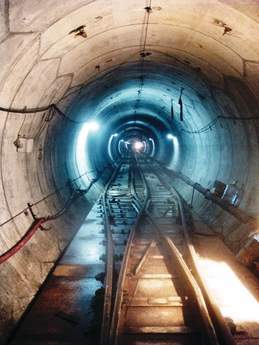 At 5464km long, the Yellow River is the second longest river in China and provides water to over 12% of the country’s 1.3B people. Its reach falls short, however, in chronically dry Shanxi Province – a region that only receives about 400mm of rainfall annually, and has in recent years experienced severe droughts coupled with rapid economic growth.

Bringing water to the area has necessitated one of the country’s largest infrastructure projects, spanning over 10 years and 300km of tunnel. The Shanxi Wanjiazhai Yellow River Water Diversion Project, initiated in 2001, will transport water from the Wanjiazhai dam to far-reaching industrial areas in Taiyuan, Pingsuo and Datong.

The latest instalment of the extensive north main line, known as the Pinglu tunnel, will be one of the world’s longest tunnels excavated with a single TBM. In July 2009 the 4.8m diameter Robbins double shield TBM, which is boring the 25.4km long waterway, set ring number 15,000 – making the tunnel nearly three quarters complete.

Work on the massive scheme started when China’s project authority financed construction of the Wanjiazhai concrete dam on the Yellow River to create the diversion reservoir. The first section of tunnel – the 22km long, 6m diameter feeder tunnel – was completed in the mid-1990s.

Excavation of the south main line began in 1998, under the Shanxi Wanjiazhai Yellow River Diversion Project Corporation (YRDPC). The completed south main travels 100km southward from the diversion sluice in the general main at Xiatuzhai. The design allows for a supply of water at a rate of 20.5m3/sec.

Contracts were divided into five lots, with II, III, and V covering tunnel works. Lots I and IV addressed pumping stations and sections of buried pipeline. Lots II and III were awarded to the Wan Long JV, a partnership of Impregilo (48%) and CMC (42%) with the Bureau 4 of the China Water Conservancy and Hydropower Ministry (10%). Nearly 90km of tunnels were excavated using five TBMs, including six Robbins double shield machines.

Five TBMs, ranging from 4.8-4.9m in diameter, utilised variable-speed electric drives and 432mm disc cutters at lots II and III. Each machine was launched from its respective portal or adit between December 1998 and February 1999.

Geology along the tunnel alignment was complex and highly variable. Shanxi Province lies on China’s famed loess steppes, consisting of a soft compacted material, with underlying homogeneous strata of sandstone, mudstone and limestone. Rock strengths ranged between 120 to 220MPa with little ground water.

A possibility of karst voids in the limestone was also identified, as well as clay deposits and zones of shale with coal seams. The dangers of methane gas are also very real in all of the Yellow River tunnels, as they are situated close to some of the largest coal deposits and high volume coal mining operations in the world.

Despite variable geology that periodically hindered machine advance, rates topped 1821m per month and 121m in one day – world records prior to the excavation of lot V, which utilised the sixth Robbins double shield machine at high advance rates.

Excavation of lots II and III was completed by 2001. Lots II and III of the south main line were bored under a strict contractual schedule of just 48 months, requiring a new type of segment design to aid in simultaneous lining and excavation.

In the arid project region, where the Gobi Desert is making a swift advance into the country, and where karstic geology drains much of the water available, seepage from the long supply conduit must be minimised. Water flow through the tunnels is gravity-fed but not pressurised, necessitating a minimum of water loss. Lining for all of the TBM-driven tunnels consists of specialised hexagonal segments for speedy and water-tight tunnelling under the unique environmental circumstances.

Hexagonal segments have been used on several earlier projects; however the Yellow River design differs in that it incorporates specialised sealing gaskets to keep the tunnels sealed off. The segments are still in use on the Pinglu tunnel, where they are produced in the city of Shuozhou about 15km from the Pinglu jobsite. At the casting plant, segments are produced 24 hours a day using steel forms. A production cycle consists of concrete casting and steam curing for three hours at 70°C. The segments are then left in an indoor curing area for two days.

The so-called ‘honeycomb’ lining system requires a high degree of precision and strict tolerances. A 1mm offset is specified for the width and length of each lining section, while a 0.2mm offset is required on the contour of the perimeter joints. Dimensions are monitored and production is managed using a programmable logic controller (PLC).

During tunnelling, segments are placed in rings of four elements, in a honeycomb configuration staggered longitudinally. The non-bolted lining requires dowels to assist in accurate placement, as well as packers to negotiate curves and manage alignment corrections. The annulus is then backfilled with pea gravel and subsequently consolidated with a thin backfill grout.

Each segment is erected within the tail shield, with the invert segment placed directly on the excavated surface through a slot in the tail shield. Pea gravel is then injected into the second ring behind the segment erector in the tail shield. Short dowels are used on the longitudinal joints, while rod dowels in the zigzag joints behave as positioning keys. Non-pressurised back-fill grout, used to bolster the integrity and stability of the lining, is injected into the invert at the grouting station on the first back-up trailer, about five rings away from the ring erector. Mortar is injected into the joints between rings, and full grouting of the crown and sides is accomplished from 10m behind the end of the back-up system.

Excavation of the Pinglu tunnel

The Robbins machine boring the Pinglu tunnel has been operating in China since 2000, when it was used to bore the 12km long lot V tunnel on the south main line. During the course of excavation, the machine set two world records in its size class of 4-5m: best month (1855m) and monthly average (1352m). Both records still stand.

The Pinglu tunnel connects the north main line to the general main tunnel. Work includes about 20km of drill and blast tunnels, excavated in 2005, as well as the 25.4km long TBM-driven tunnel that will transfer water to the Pinglu, Shuozhou, and Datong areas. Additional work underway includes about 120km of 4m diameter buried pipe. Once completed the north main line will transfer about 22.2m3/sec of water through 147km of tunnel and buried pipelines.

The Sino-Austria Hydraulic Engineering Co (SAHEC) is responsible for the Pinglu tunnel, of which about 5km was left to excavate by late September 2009. The machine has been boring since 30 September 2006 in mixed strata up to 50MPa UCS.

Muck removal is by trains of rota-dump muck cars in two tracks using California switches. The back-up system is equipped with floor chain movers to shunt the muck cars as they fill. Ventilation in the long tunnel is generated at a minimum rate of 5.4m3/sec by high-powered fans. The fans, situated at the portal, deliver fresh air to the tunnel face via 1.4m diameter flexible ducting.

The machine broke through into the Daliang shaft chamber at the 13km halfway point on 1 October 2008, and was refurbished before starting up again in December. “Since refurbishment the geology has been fairly stable, though we have had some sections with ingress of water up to 30 l/sec that slowed progress,” said Peter Enge, project manager for Alpine Bau GmbH. As of September, the machine has averaged about 26 rings per working day and has erected about 16,700 rings. The final breakthrough is scheduled for the end of April 2010.