Most readers of Modern Power Systems will be familiar with the acronym IGCC, integrated gasification combined cycle, but what about ISCC? 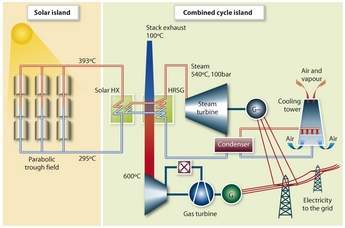 It is not a typographical error but stands for integrated solar combined cycle, a hybrid of solar thermal technology and natural-gas-fired combined cycle. Now, after more than ten years of discussion, Egypt’s pioneering ISCC project – likely to be the first such plant to enter operation – is making major headway. It is hoped that the plant, which will initially have a total installed generating capacity of about 135 MWe, will be fully operational in 2010. Construction is to be carried out in such a way that it will be possible to increase the solar component in the future to raise the total installed capacity of the installation to around 150 MWe.

At the end of February the Egyptian ISCC project took a further key step forward with the awarding to NEM of the Netherlands the order for the supply of the water/steam equipment, including heat recovery steam generator, and associated control systems. If all goes according to plan, NEM will deliver the water/steam equipment modules in mid 2009. The order volume for NEM’s scope of supply is around r12 million.

Location of the project

The Egyptian ISCC facility is to be built at Kuraymat, around 92 km south of Cairo, on the eastern side of the Nile. This is already the location for conventional, natural gas fired, combined cycle projects, with good grid connections (500 kV, 220 kV and 66 kV) and natural gas supplies, together with access to cooling water, from the Nile.

The proposed site for the ISCC plant is a piece of uninhabited flat desert, with a very high level of insolation, about 2400 kWh/m2 per year.

The Kuraymat ISCC plant will employ a “field” of parabolic troughs to capture the solar radiation (ie, it will be a form of CSP (concentrated solar power) technology)). This ‘solar field’ will take up more than 13 acres and will have a thermal capacity of 60 MW. The solar collectors are connected in series and parallel to produce the required heat energy by tracking the sun from east to west, rotating on a north-south axis.

The parabolic troughs (formed from U shaped glass mirrors) will focus the solar radiation on a system of tubing filled with synthetic oil, which is used as the heat transfer fluid for the solar island. The circulating hot oil is heated to 393°C at 20 bar and used to evaporate water in heat exchangers (supplied by NEM). The resulting steam is fed into the steam pipework of the heat recovery steam generator, also provided by NEM.

The steam from both sources, solar and natural gas, is integrated and used to drive a steam turbine generator, rated at 76.5 MWe. The steam turbine exhaust is condensed in a condenser and pumped to a dearator and then to the HRSG.

Both the water/steam and oil cycles are closed systems.

The installed capacity of the solar portion of the plant is estimated to be 20 MWe and that of the natural gas fuelled combined cycle element some 120 MWe.

The overall fuel efficiency of the plant when operating with solar energy will be around 67%.

The complex character of fluctuating solar heating and the big variations in temperature (the solar field does not deliver any heat during the night of course) make big demands on the water/steam cycle equipment. The heat exchangers need to be able to cope with the rapidly increasing temperature of the solar heated oil filled pipework each dawn, while the heat recovery steam generator has to be both robust and flexible enough to accept all the generated steam.

The US $327.57 million Kuraymat integrated solar combined cycle project is being developed by Egypt’s New and Renewable Energy Authority (NREA), a subsidiary of the Egyptian Ministry of Electricity. Egypt’s power demand grew by an average of 7%/year between 1997 and 2004 and is expected to be in the 6-7% range over the next decade. The Egyptian government hopes that 20% of the country’s installed capacity will be renewable by 2020. NREA’s plan is to have about 750 MWe of solar/gas combined cycle hybrid plant in operation by then, with a solar component of about 150 MWe.

On 30 September 2007 NREA signed an EPC contract with the Spanish company Iberdrola Ingeneria y Construccion (Iberinco), in consortium with Mitsui of Japan, for the combined cycle island of the ISCC plant (and NEM’s contract for the water/steam cycle equipment is with Iberinco). The Iberinco/Mitsui contract is valued at 150 million euros, and the first large award for Iberinco in Egypt.

On 21 October 2007 NREA signed an EPC contract (valued at EGP 604 million (US $ 109 million)) for the solar island with the Egyptian company Orascom Construction Industries. Orascom’s scope covers all civil work plus two years worth of operation and maintenance for the plant. The Orascom contract also includes EPC, testing and commissioning for the solar field, including related instrumentation and communication systems, the control room, the heat transfer fluid system, as well as the heat transfer fluid inlet and outlet flanges of the solar heat exchangers.

Fichtner Solar of Germany has been selected to provide technology and engineering for the new plant, while Flagsol will supply the solar trough panels and associated engineering.

At the time of writing NREA was negotiating a contract for project execution contract management sevices.

Part of the funding for the Kuraymat ISCC project has been provided by the World Bank, through its Global Environment Fund (GEF). The GEF approved a $49.8 million grant agreement for the solar portion of the project – reflecting its perceived pioneering role in the development of clean power generation technology – and an agreement was signed with the Egyptian Ministry of International Co-operation on 16 December 2007. This grant covers a substantial part of the incremental cost relative to the least cost conventional alternative producing the same annual amount of electricity.

The Japan Bank for International Co-operation is supporting the “power generation portion” of the project (gas and steam turbines, HRSG and heat exchangers) through a 10.665 billion yen soft loan.

The Egyptian project is one of three ISCC plants currently at various stages of planning in north Africa, the other two being in Morocco and Algeria respectively. While the Egyptian project may not be the largest of these it has the distinction of being first and will be seen as a major milestone in the development of hybrid solar/combined cycle power generation technology.