Glenn Tarbox and Vik Iso-Ahola of MWH Global provide details on the seismic and hydraulic upgrade of the Big Tujunga Dam in Los Angeles, US 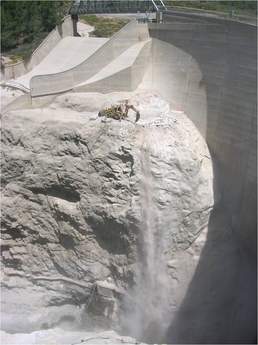 On the heels of numerous and often catastrophic seismic events occurring throughout the world, Los Angeles County Department of Public Works (LACDPW) recently completed upgrades to a critical piece of infrastructure to protect against a possible failure and its devastating impacts.

The Big Tujunga Dam, located in the San Gabriel Mountains just north of Los Angeles, was originally built as a thin arch dam in 1931 for the primary purpose of flood protection; however, in recent years, it has also been used as water supply for Los Angeles, the second largest city in the US. It stands at 244ft (74m) tall with a crest length, including the earthen embankment on the right side, of 830ft (253m). The reservoir created by the radius thin arch dam impounds up to 5750 acre-feet (7Mm3) of water.

After decades of concerns that the dam couldn’t handle significant seismic or flooding events, during which the reservoir was not permitted to operate at full storage capacity, LACDPW embarked on efforts to rehabilitate the dam through both structural and foundation improvements.

Bringing the dam up to code was paramount given the estimated damages a significant seismic or flooding event could inflict on the city of Los Angeles: injury or loss of life; $175M in damage to homes, buildings, facilities and roads; disruption of utilities services and commerce to more than 100,000 people; and loss of critical water storage and supply for Los Angeles’ nearly 10 million residents.

Big Tujunga has been challenged by seismic and hydraulic concerns for more than 30 years. A series of improvement programs, studies and remedial actions have taken place throughout the project’s lifecycle, with a specific emphasis on abutment and foundation improvements.

During construction of the dam and continuing through 1968, eight grouting remedial programs were performed. Each was an attempt to construct a continuous grout curtain along the upstream heel of the dam and to delineate and seal off fractures beneath the dam, which had led to slow leakage. However, these efforts did little to reduce the leakage flows, and concerns of abutment stability remained.

Further seismic concerns were confirmed by Lindvall Richter & Associates in 1975. Their study concluded that the Big Tujunga Dam was unable to resist seismic loading during a MCE. Consequently, the reservoir level, in the midst of a severe statewide drought, was restricted to 25% storage capacity by the California Department of Water Resources, Division of Safety and Dams. Compounding seismic concerns, updated hydrology studies using the latest Hydrometeorlogical Reports (HMR) confirmed that the spillway did not meet standards for passing the PMF.

LACDPW deferred remedial measures, opting to restrict the reservoir levels and maximum reservoir surface to ensure dam safety for nearly 30 years while they pursued less challenging seismic and spillway remediation at 14 other major dams. This decision was made because of the high cost of full rehabilitation, which ultimately cost $100M. Such a high price tag caused LACDPW to carefully consider the cost-benefit ratios of the project, which included assessing both full dam rehabilitation to restore full reservoir capacity and converting the dam into a debris basin that would not restore reservoir capacity but would allow for the necessary flood protection. Dam removal was not an option, based on its critical role in flood protection for the drainage area.

During the 2004-2005 winter season in the midst of final rehabilitation design, Los Angeles experienced the wettest winter in decades. Flows of nearly 6000ft3/sec (170m3/sec) caused a major portion of the downstream left gunited canyon wall to fail and fall into the river. This event increased scrutiny regarding the stability of the adjacent thrust block, and although studies concluded that there was no convincing evidence to lead to the failure of the left dam abutment and thrust block, there remained a risk of slope failure. This event further supported LACDPW’s decision to fully rehabilitate the dam, which would address the earlier hydraulic and seismic concerns.

The first step of the rehabilitation process involved commissioning MWH Global in 1996 to conduct studies that would reanalyze the seismic and hydraulic issues. These studies confirmed that the existing structure could not handle the MCE or PMF, which led MWH to propose a number of alternatives for rehabilitation to meet the required standards through dam structure and foundation improvements.

The initial proposal for the 30% design concept called for construction of a downstream concrete buttress to convert Big Tujunga into a gravity dam. However, there were numerous challenges to this concept including questionable foundation conditions, uncertainties over the amount of alluvial material and how much weathered bedrock needed to be removed, as well as the cost and volume of concrete required to make it a gravity dam.

Comprehensive subsurface geotechnical investigation programs helped MWH engineers better understand many of these unknowns. Based on these new understandings, particularly how the foundation rock would support the weight of additional concrete downstream of the dam to construct the buttress, MWH redesigned the concept to preserve the dam as an arch dam. Unnecessary concrete was removed from the base and redistributed to the upper elevations to strengthen the arches and retain the beneficial horizontal transfer of thrust forces into the abutments. The optimized thick arch design resulted in a savings of approximately 40,000yd3 (30,582m3) of concrete, or about $25M (USD), and created a smaller footprint for the dam.

This design ultimately strengthened the dam by adding concrete against its downstream side to create a thick arch, in addition to the construction of a unique ogee crest spillway with flip bucket.

To implement this design, approximately 70,000yd3 (53,518m3) of conventional mass concrete was placed on the downstream face of the dam, from foundation to crest, to convert the structure into a thick arch with uniform thickness arches. The new concrete added 12ft (3.7m) of crest thickness to the existing dam for a total crest thickness of 20ft (6m), at a slope of 0.25 to 1 (horizontal to vertical) on the downstream face, with an additional base thickness of approximately 66ft (20m). To ensure monolithic behavior and to reinforce the cohesion of the new to old concrete, the concrete was joined together in a grid pattern of horizontally installed grouted dowels embedded into the downstream face of the old dam and upstream portion of new concrete. The added strength of the thickened arch dam officially brought the structure up to code to handle MCE loading.

To help the dam meet the PMF code, the 30% hydraulic rehabilitation design concept of the spillway called for construction of a stepped central spillway on the downstream side of the original concrete gravity buttress. This concept would have allowed for energy dissipation of overtopping flows as water cascaded downstream from the face of the buttress. However, as the rehabilitation of the dam design was optimized, MWH instead recommended a unique overtopping ogee crest spillway which when combined with the existing right abutment spillway created enough capacity to meet the PMF. The untraditional curved spillway shape essentially throws the entire spill into the plunge pool at the canyon bottom, downstream and away from the dam.

A 3D finite element method (FEM) analysis helped verify that the resulting design met both PMF and MCE loading requirements. The analysis specifically showed the thick arch concept to be safe under static loading conditions, including the extreme PMF event, well within the prescribed Factors of Safety defined by the US Army Corps of Engineers EM 1110-2-2201. Under MCE, the design was proven to be within the established dynamic compressive strength of concrete at all locations of the FEM model. While the analysis showed that some tensile stress peaks exceeded the estimated dynamic tensile strength, the stress excursions were isolated and occurred at the face of the dam.

MWH also performed sensitivity analysis to evaluate the impact of varied conditions in the foundation model, which included a vertical boundary that delineated an abrupt change in geology and material properties. The sensitivity analyses demonstrated changes in locations of stress peaks in the dam with and without the vertical boundary. However, the overall magnitude of stress and number of instances above the allowable dynamic tensile strength remained unchanged.

These analyses and a comparative inspection of stress time histories throughout the thickness of the dam concluded that should an MCE earthquake take place, it would not impact the overall integrity of the structure or present danger for dam failure. While some localized cracking on the upstream or downstream face could occur, the overall dam rehabilitation was considered safe under a full reservoir condition.

New automated instrumentation equipment installed during the project will be used to monitor the dam’s long-term safety. This includes assessing how the dam is performing within the design parameters, confirming the effectiveness of the foundation drainage system, monitoring performance of the dam during filling and rapid drawdown of the reservoir, and understanding the response of the dam during seismic events. No significant issues have been noted since the project was completed and the reservoir was filled in July 2011.

In addition to meeting the primary objective of rehabilitation efforts – dam safety – the project also strengthened water conservation and environmental efforts. Fully restoring the reservoir to full capacity, which translates to an additional 4500 acre-feet (5.5Mm3) of water per year, eliminates the need for the city of Los Angeles to import that volume of water, saving the city approximately $2.25M annually.

The dam also now allows for low-flow stream releases that were not possible with the old structure’s large valve installations. The new 24-inch-diameter jet flow valve can release minimal in-stream flows necessary to supplement streamflow and recharge pools to enhance critical environmental habitats for many species, including the endangered Santa-Ana Sucker fish.

The project, which was re-dedicated on July 21 was awarded the 2011 National Rehabilitation Project of the Year Award by the Association of State Dam Safety Officials and is an outstanding example of LACDPW and MWH’s commitment to exemplary dam engineering, innovation and safety.

Glenn Tarbox is dams practice leader for the Americas region of MWH. Tarbox has more than 50 years of experience in the field of dam engineering, and he was named one of the Top 20 Contributors to the Dam Engineering Sector by International Water Power and Dam Construction.

Vik Iso-Ahola served as project manager for MWH on the rehabilitation of the Big Tujunga Dam and serves as a Principal Engineer providing dam analysis, rehabilitation and design services for MWH projects in California and the West.